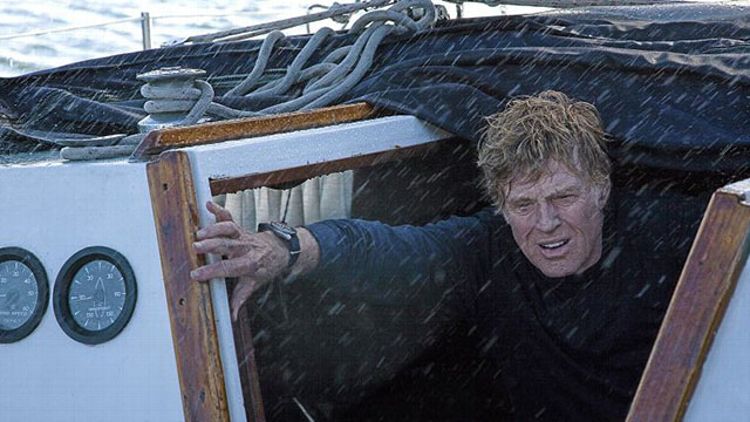 Director J.C. Chandor’s All Is Lost is the spiritual sister to Alfonso Cuarón’s Gravity, and it deserves to enjoy a similar measure of critical and commercial success. What Gravity did for space, All Is Lost does for the open ocean. Made from a 30-page script by Chandor that contains barely any dialogue, All Is Lost is centered on a tour de force performance by the 77-year-old Robert Redford. Redford is the only human actor in All Is Lost, and you have a long time to meditate on what makes him such a great actor. He is understated in the best way, and more effective than a barge full of the screaming monologues or show-offy affectations other actors have. All Is Lost is a beautiful showcase for Redford, who shares billing with nature.

A student of the wilderness and a born Westerner, Redford seems comfortable with silence and space. The movie’s forward narrative is neither nonstop nor static, which feels pleasurably unpredictable. Scene length varies, and the big action sequences play out in interesting and unexpected ways. The pacing is not exactly in real time, but it approximates realism. As the sailor draws on his reserve of dearly earned knowledge to combat the elements, Redford dips into his own techniques to turn in a performance that is instantly legendary. It sounds gimmicky when you explain it, but it works. Redford’s acting is minimalist, and it serves the movie, whose plot and framing are similarly minimalist. The film is spartan in concept and perfectly executed. The sound design is particularly great.

All Is Lost is a survival film, like Gravity. Survival films focus on an extended escape sequence in which the hero is pursued by external forces. They tend to be stressful, suspenseful, and naturalistic. The supposed naturalism is part of the draw. These stories could happen to anyone (who became lost at sea or adrift in space). Survival films mimic common anxiety dreams about being trapped or chased. It’s been a big quarter for survival films, with the Tom Hanks ship-hijacking movie Captain Phillips taking place in part of the Indian Ocean different from where Redford’s stranded nameless sailor is drifting without a port, a friend, or even a volleyball to talk to.

Gravity and All Is Lost also make the wise choice to clock in at around 90 minutes rather than dragging out their final acts with more obstacles just to reach the more standard blockbuster length of two hours. Sometimes it feels like a movie’s prestige is correlated with its running time, and winter awards seasons tend to mean bloated important films. I’d rather see a great 90-minute movie made from a 30-page script than a mediocre two-hour film that comes in at the standard 120 pages. Now, I like plenty of long films, but I also appreciate movies that cut the fat. Sometimes I’m in the mood for Blue Is the Warmest Color’s three-hour pâté en croûte, and other times I want All Is Lost’s hardtack or Gravity’s astronaut ice cream.

Like Gravity, All Is Lost evokes a childlike wonder at its digital effects. Since the flawless Jurassic Park, CGI has been wildly hit-and-miss, with expectations often outpacing the technology. But when digital technology is used to create immersive environments, it taps into the wonder that special effects are meant for. The most amazing thing about the digital effects in movies like All Is Lost, Gravity, and digital lodestar David Fincher’s Zodiac is that you are not even sure where the effects are. Afterward you wonder “How did they do that?,” but you never think about it during the movie because you become so spellbound by the film.

While countercultural peers like Robert De Niro, Al Pacino, Dustin Hoffman, and Jack Nicholson tended to run hot (in homage to Marlon Brando, most likely), Redford always burned cold. He was more kin to Paul Newman, with whom he was partnered for Butch Cassidy and the Sundance Kid. Redford regularly played beautiful upper-class men (like a male Grace Kelly), but he was from a humble middle-class Los Angeles background. His mother, Martha, was from Texas and his father was a milkman from Connecticut who became an accountant. Redford’s family moved from Santa Monica to Van Nuys, where he spent his formative years attending Van Nuys High School.

Redford dropped out of college and moved to New York, which in the 1950s was the major hub of the television industry. Actors could work on their chops in the city’s vibrant theater scene and be scouted by TV casting directors there. Redford did plays and guest bits on popular shows like Alfred Hitchcock Presents, Dr. Kildare, and The Twilight Zone. His breakout role came in 1963, as the uptight proto-yuppie husband in the original stage production of Neil Simon’s Barefoot in the Park. Redford debuted onscreen in the early ’60s. He played a soldier twice, and then a bisexual ingenue in the 1965 Robert Mulligan curiosity Inside Daisy Clover (a bomb). He was a suave Southern bachelor in Sydney Pollack’s This Property Is Condemned, the first hit movie he was involved with. Unlike Daisy Clover, This Property was a hit. He starred alongside Brando and Jane Fonda in Arthur Penn’s The Chase, and in 1967 enlisted Fonda to play the free-spirited wife when he reprised his role for the film version of Barefoot in the Park.

Redford was the original choice for The Graduate, bearing a much closer resemblance to the WASPy Benjamin Braddock of Charles Webb’s book than Dustin Hoffman, who with Buck Henry’s script made over Braddock in his own image instead. Redford was wary of being typecast as the sort of handsome lunk he could easily play. He opted to make Butch Cassidy and the Sundance Kid next in 1969, which played up his resemblance to Newman, another pretty boy who’d proved repeatedly he was much so more than that. The neo-Western expanded on the new Hollywood style of its ’67 forebear, Bonnie & Clyde. Of course Redford avoided playing starchy new-money types. He is anything but stiff. Butch Cassidy showed off Redford’s graceful physicality to full advantage.

As a minted star, Redford tried his hand at genres: a ski movie (bomb); a heist movie (bomb); a motorcycle gang movie (bomb); a political satire (1972’s The Candidate, a hit); a romantic drama (The Way We Were, a blockbuster); more Westerns (mixed results); and the hugely successful caper The Sting, which reunited him with Newman, was one of the top-grossing films of all time, and earned him an Oscar nomination. He continued to build credibility and gain power throughout the mid-’70s, starring as the ultimate uptight guy in The Great Gatsby and playing a rightfully paranoid CIA operative in Three Days of the Condor. In 1976 he executive-produced All the President’s Men, a passion project in which he starred as Bob Woodward opposite Hoffman’s Carl Bernstein, the two Benjamin Braddocks meeting face-to-face in the alternate dimension of Washington, D.C., journalism.

In the ’80s he began directing, while continuing to act and winning an Oscar for Ordinary People. He launched his official successor, Brad Pitt, in 1992 by casting him in A River Runs Though It. In 1994 Redford directed Quiz Show, a stone-cold classic that failed at the box office. The five films he has made since then have fared poorly at the box office and in reviews. The most recent was 2012’s The Company You Keep, in which Redford starred opposite Shia LaBeouf. Redford has been a constant presence in independent film though the Sundance Film Festival, which has evolved recently into something of a yearly corporate clusterfuck but is still an important breeding ground that fosters new voices and unusual visions.

All Is Lost gives Redford an opportunity to show off the outer athleticism and inner soulfulness that define his appeal. He is constantly springing into motion, patching, cranking, swimming, climbing. Emotions and thoughts flicker across his face like lightning. He is still incredibly gorgeous but somehow earthly, deeply so. All Is Lost is a project worthy of him, built around him and delivering on his ultimate potential. Every single motion of Redford’s nameless character is vitally important. His performance, like Sandra Bullock’s in Gravity and Adrien Brody’s in The Pianist, is a trip to the limits of the human will. It’s about the lengths to which we will go for survival, how our bodies are remarkably strong but also plenty fragile. We are small, but also large; we contain multitudes. Redford and the ocean are evenly matched.