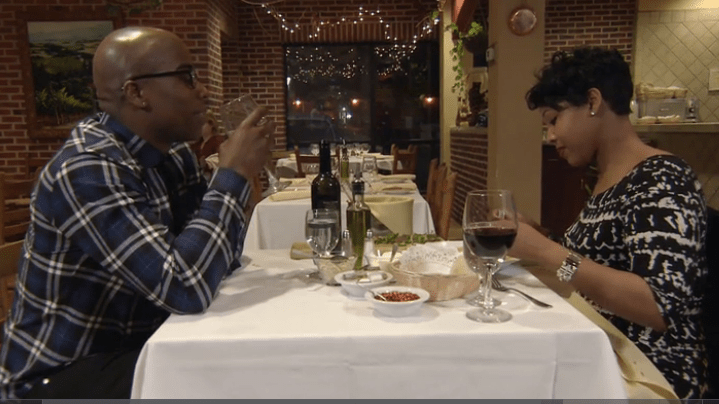 Why Are We Watching Him? He’s trying to relate to his new wife, Monet, after a few strained days.

How Did He Get Here? He and Monet both agreed to participate in a “social experiment” that involved them letting a panel of “experts” choose ideal mates for them, whom they would then marry, having only met each other at the altar.

What’s the Grossest Thing We See? Vaughn tries to show Monet what his pre-marriage life was like by taking her out to an Italian restaurant in south Jersey, where he lived until he moved in with her in Harlem. Italian’s her favorite kind of cuisine, so he’s off to a good start. Then, over this nice dinner, Vaughn proceeds to tell Monet he’d like it if they cooked meals like this together, “and by ‘us,’ I mean ‘you’”; to ask her thoughts on ménages à trois; and to suggest they block off a whole weekend day soon for a sex marathon.

What Have We Learned? Vaughn was apparently single for a reason (and soon may be again).

Who Is This Now? Karissa.

Why Are We Watching Her? She’s showing us around the property where she plans to ride out the next Great Depression, which she thinks could be imminent.

How Did She Get Here? Getting laid off from a corporate job and being forced to file for bankruptcy made her realize “how fragile this economy is.”

What’s the Grossest Thing We See? I’m not saying Karissa shouldn’t raise mealworms, which are not just good feed for her chicks but also an excellent and efficient protein source for humans. I just don’t think she should keep them, in what appears to be a catering tray full of dirt, under her bed.

What Have We Learned? Between this week’s underbed grubs and last week’s kitchen full of ground rabbit feces, I’m starting to think preppers could be slightly more focused on hygiene.

Who Is This Now? Shira.

Why Are We Watching Her? She’s explaining the unconventional methods she’s employing to raise her challenging son, Yonah.

How Did She Get Here? Shira, who has her own line of aromatherapy spritzes and describes her parenting style as “eco-kosher, shamanistic, organic, natural, and for highest and best good,” has determined that Yonah is an indigo child, which means, in her view, that he should not be subject to the same sorts of rules or limits that most other children are.

What’s the Grossest Thing We See? Functionally, what this means is that Yonah, who is 10, acts out a lot, since he’s figured out that Shira thinks all of his bad behavior can be traced back to his status as an indigo child. So for instance, when he comes home from school with a bullet in his backpack, she is aghast, but still lets him fiddle with it when he’s supposed to be doing his homework. Unfortunately, Yonah has an older sister, Emma, who is not an indigo child and therefore is ignored by Shira, who spends what was supposed to be a special day at the “spiritual store” bragging to the owner about the absent Yonah. Later, after Yonah starts to thrive at a new alternative school and gets an A-plus on a test, Emma can’t take it anymore and says she got 100 percent on a test the first week of school and Shira didn’t care. Shira apologizes but says she doesn’t remember. Yes, Shira, I believe that’s Emma’s point.

What Have We Learned? If Emma has a dad, she should consider living with him.

Who Is This Now? Cristina.

Why Are We Watching Her? She’s meeting with cosmetic surgeons Drs. Nassif and Dubrow about possibly correcting an earlier procedure she underwent.

How Did She Get Here? After her divorce, Cristina wanted to boost her confidence with a tummy tuck, but apparently the surgeon she got to do it was not particularly reputable.

What’s the Grossest Thing We See? The incision from Cristina’s original surgery got infected with MRSA. That resulted in the incision opening up and greenish discharge oozing from it. Consequently, Cristina developed a terrible fear of surgery, so to help get her through it by explaining what’s happening as he goes, Dr. Dubrow performs her tummy tuck with her wide awake.

What Have We Learned? There are worse things than loose abdominal flesh, and two of them are being awake for your tummy tuck and MRSA.

The Legacy of Robin Williams: The Movies