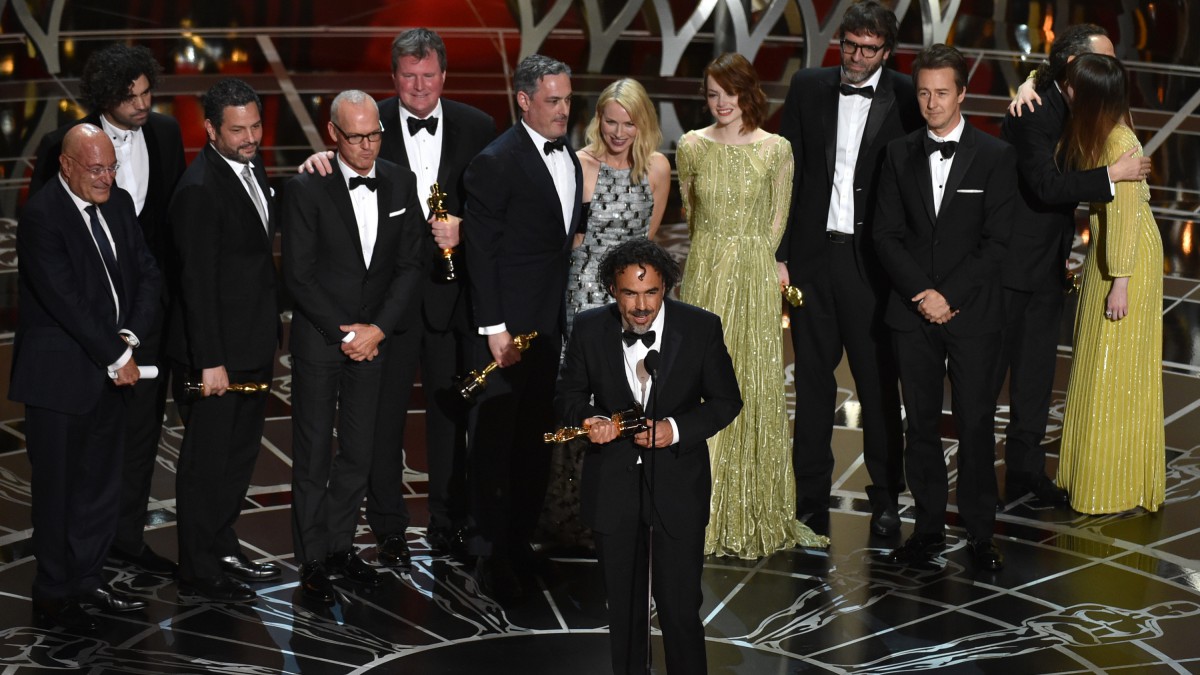 Last night’s Academy Awards were touted as one of the closest races in years. The Best Picture preferential ballot was going to make things impossible to predict! Bradley Cooper was coming on strong! American Sniper’s booming performance at the box office was a narrative changer! Academy voters really, really like [fill in the movie title], so don’t be surprised if it pulls off an upset!

Instead, here’s what happened: The two movies that led the evening in total Oscars — Birdman and The Grand Budapest Hotel, with four apiece — were the very same two movies that led the Oscar nominations with nine apiece.1 The movie that took home the most attractive hardware — Birdman, which won Picture, Director, Original Screenplay, and Cinematography — was the movie that swept through the preliminary guild prizes, so, you know, in retrospect, of course. And you know what movie Academy voters really, really liked? Every single one of the films they nominated for Best Picture, not one of which went home empty-handed.2

Also not surprising: As seems to happen every year, approximately 80 percent of the nominees lost. This can lead to bad feelings and gripes about what “the Academy” does and does not get and does and does not like, as if the Academy is a monolith. It is not; if anything, it is a house divided against itself, though one that manages to remain standing. In fact, sometimes it’s the very act of standing that exposes the deepest divisions. As the in-house thunderous ovation for the Oscar-winning song “Glory” from Selma attested, there is a large Academy contingent (the “still healthy enough to attend the show” demographic) that pretty clearly feels Ava DuVernay’s film got screwed. I’m with them.

As for the big winner: Voters were obviously mad about Birdman, and everyone who was rooting for something else is … you know, mad about Birdman. It is possible to admire the exquisite craft and technical facility with which the movie was made, to be amused and charmed by its droll, darkly comic take on narcissism, artistic aspiration, and the fight of a creative individual to make a mark, and still feel a slight twinge of … This again? Another movie about showbiz and its lovable nutcases? There are stretches in which the Oscars seem to go into hibernation; think of the 1980s, when Chariots of Fire and Gandhi and Amadeus and Out of Africa and The Last Emperor won and it was hard to discern how much curiosity, or much of anything other than a desire to retreat from the world and the country into a kind of pictorial/historical splendor, the Academy had. In retrospect, I think those movies won not because Academy voters didn’t care about what was going on in America, but because they didn’t know what was going on with American movies. The 1980s — post–Raging Bull, pre–indie boom that began with 1989’s Sex, Lies, and Videotape — were a decade of uncertainty and trepidation about what American films were supposed to be, other than blockbusters.

Back then, the Academy coped with that anxiety — the threat of a scary and bewildering future — by looking backward. Thirty years later, it is coping with it by looking inward with The Artist, Argo, and Birdman. Stow these movies in a time capsule and, 50 years hence, our descendants won’t learn much about what Oscar voters thought of the world, but they’ll learn a great deal about what Oscar voters thought of themselves.

Or don’t do that, because the truth is, the time-capsule approach to Oscar voting is overrated. The Oscars aren’t really about posterity (they’ve never enhanced the long-term reputation of a winner or damaged a loser); they’re about transience, a selfie snapped at the end of a long campaign. And what this selfie said was “Come on, we’re trying.” The sing-off between Neil Patrick Harris and Anna Kendrick and Jack Black was, even by the standards of a fairly self-conscious ceremony, very meta. Those two strains of argument — “Let’s celebrate our effort!” and “This business is going to hell!” — sat side by side in the house last night, and, of course, the winning movie was the one that cannily embraced both of those views.

I sense the music is about to play me off, so, in the tradition of all of last night’s winners, I will completely ignore it and now make a statement about my personal journey. I went 17-for-24 in my guesses, with the films I had listed as “Close Seconds” taking six out of the seven prizes that I missed. Those included Birdman’s win for Director and Original Screenplay, The Imitation Game’s Adapted Screenplay win (its only prize), Grand Budapest Hotel for Original Score, Whiplash for Film Editing, Feast for Animated Short, and Big Hero 6 for Animated Feature, which, in prognosticator-land, was the night’s only big surprise — with the possible exception that there were a half-dozen political speeches and none of them came from Glenn Greenwald.

Where do we go from here? Far away from the surliness that has come to define too much of the season, I hope. A year in which Selma and Boyhood and Birdman and Whiplash and Nightcrawler and Foxcatcher and The Grand Budapest Hotel were all nominees is not a year in which one should be particularly dour about the state of ambitious American movies or the ability of the Academy to spot them. A year in which an 84-year-old man directs a blockbuster that dwarfs the rest of the competition at the box office and in which 1965 can be commemorated with equal fervency because of both the march in Selma and the release of The Sound of Music is a reminder that careers are gratifyingly long and the Academy’s sense of history is surpassingly weird. A year in which Birdman wins Best Picture is a year in which the industry’s top prize goes to a good movie rather than a bad one, for which let us give thanks. And a year, or 12 of them, in which Richard Linklater makes Boyhood brings us back to what we’ve known all along, which is that there are some achievements that do not need the validation of a statuette.

I have no idea what next year’s Oscar race will be like, but I’ve looked over the release calendar and I don’t see a single movie about movies. I couldn’t be happier — and if I’m missing one, I’m OK with that too; it’s been a long season, and for now, I’m more than willing to give in to the unexpected virtue of ignorance.

This column originally misidentified the Best Animated Short winner as Big Hero 6 — Feast was the winner in that category.