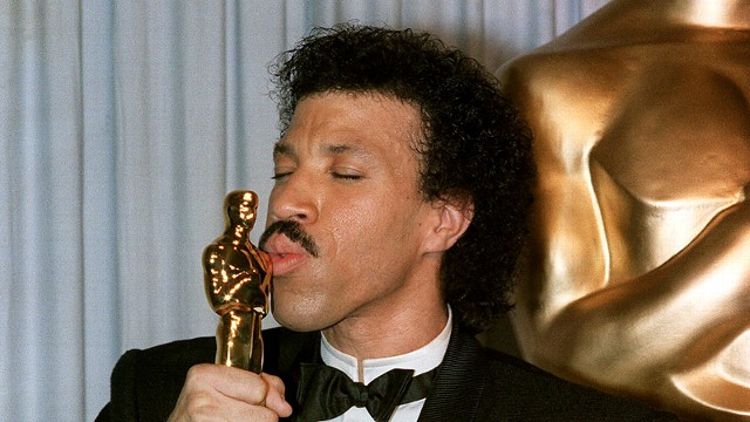 The Oscars’ Best Original Song category is responsible for Juicy J having as many Academy Awards as Christopher Plummer, and yet I still hate it. That’s how bad it is. We could have built an entire Oscar-travesties ballot consisting of nothing but egregious Best Song snubs and inexplicable Best Song winners. No Oscar category is more broken, or operates from a more antiquated methodology; Best Original Song is a travesty-generating machine. Given the choice in the first round, Grantland’s readers voted pretty overwhelmingly that Samuel L. Jackson losing to Martin Landau constituted a bigger blot on the Oscars’ legacy than the entire ignominious history of the Best Song category as a whole, which means we didn’t get to fully explore said ignominy. So let’s do that now.

The category was introduced in 1935, at the 7th Academy Awards; the first Best Song Oscar went to “The Continental,” from the second Fred Astaire/Ginger Rogers movie, The Gay Divorcee. It’s not a bad song …

… although obviously there’s only one “The Continental” that matters.

The ’30s and ’40s were the heyday of the movie musical; sometimes winners were chosen from a field of as many as 13 nominees. And most of the winning songs from 1930 through 1950 — including future standards like “The Way You Look Tonight,” “Over the Rainbow,” “When You Wish Upon a Star,” “White Christmas,” “Baby, It’s Cold Outside,” and “Mona Lisa” — are pretty unimpeachable on a test-of-time level. It’s insane that Harry Owens’s “Sweet Leilani,” sung by Bing Crosby in Waikiki Wedding, defeated George and Ira Gershwin’s stone-classic “They Can’t Take That Away From Me” in 1938, but we’ll let that go; generally speaking, the Best Song category seems to have accurately reflected movie music’s contributions to the American popular songbook for at least two decades. The ’50s and early-’60s winners’ circle is arguably a little weaker, although I’m not about to front on “Whatever Will Be, Will Be (Qué Será Será)” or “All the Way” or “Moon River.”

It’s not until the mid-’60s that the category really goes awry. Here’s the problem: Everyone in the Academy gets to vote for Best Song, but only composers and songwriters get to make nominations, so the Best Song category continues to honor traditionally composed-and-written show-tune-style pop-vocal songs throughout the ’60s and ’70s, effectively looking the other way as genres like rock, soul, funk, and disco (i.e., music by artists who aren’t in the Academy) transform the sound of American film. The 1964 Best Song Oscar goes to “Chim Chim Cher-ee” from Mary Poppins; the Beatles’ title song from A Hard Day’s Night isn’t nominated. The 1967 award goes to “Talk to the Animals” from Doctor Dolittle; Simon and Garfunkel’s “Mrs. Robinson,” written for The Graduate, isn’t nominated. The 1969 award goes to “Raindrops Keep Fallin’ on My Head”; the Byrds’ “Ballad of Easy Rider” isn’t nominated.

For all intents and purposes, the Academy doesn’t acknowledge rock until it acknowledges funk, in 1972, when Isaac Hayes wins an Oscar for “Theme From Shaft.” He performs in a shirt made of gold chains and accepts in a fur-trimmed midnight-blue tuxedo, effectively out–Rick Rossing Rick Ross four years before Rozay is even born. It’s pretty much the greatest thing that has ever happened. It’s also a historical blip: The following year, the Academy fails to nominate Curtis Mayfield for “Superfly” or “Freddie’s Dead,” Marvin Gaye for “Trouble Man,” and Jimmy Cliff for “The Harder They Come” (which arguably launched reggae as a commercial genre in the U.S.), giving the Oscar to “The Morning After,” sung by Maureen McGovern on the soundtrack to The Poseidon Adventure.

So went the ’70s. In 1977, the Bee Gees’ immortal and massively successful Saturday Night Fever spawns three no. 1 singles — “Stayin’ Alive,” “How Deep Is Your Love,” and “Night Fever” — that arguably represent the apex of disco as a pop phenomenon, but garners zero Oscar nominations. The Oscar goes to Debby Boone’s “You Light Up My Life”; other nominees include Marvin Hamlisch and Carole Bayer Sager’s not-bad Bond theme “Nobody Does It Better,” a forgettable ballad from The Rescuers, and “The Slipper and the Rose Waltz,” from The Slipper and the Rose, a Cinderella retelling with Richard Chamberlain as Prince Charming. Let me say that in a more direct way: In 1978, the Academy ignored disco but nominated a fucking waltz. (Paul Jabara’s win the following year for “Last Dance,” performed in Thank God It’s Friday by Donna Summer, was probably a make-good; it beat out a super-weak field that included “Ready to Take a Chance Again,” a.k.a. the Barry Manilow love theme from Foul Play.)

Oh — and in 1979, the theme song from Norma Rae beat “Rainbow Connection” from The Muppet Movie. C’mon.

Things got marginally better in the ’80s. The fact that “Let’s Hear It for the Boy” got a nomination in ’85 and “Purple Rain” didn’t is obviously insane and unforgivable, but you no longer get the sense that old-guard movie-music composers and lyricists are holding the line against contemporary pop. For better or for worse, these songs were hits:

That run comes to an end in ’90, when the Oscar goes to “Under the Sea” from The Little Mermaid and the category returns to its musical-theater roots in a big way. Six of the next 10 winners are big, swoopy Disney-film showstoppers; Stephen Sondheim wins an Oscar, and so does Andrew Lloyd Webber. Bruce Springsteen and Neil Young both get nominated for their contributions to the soundtrack of 1993’s Philadelphia, and Bruce’s “Streets of Philadelphia” wins, and there’s that weird moment where Elliott Smith is forced to get up and mumble part of “Miss Misery” while wearing a white Prada suit like it’s a hair shirt, but beyond that, the Academy basically spends a decade ignoring modern pop/rock songs not written by power-schlock balladeer Diane Warren, who gets nominated four years in a row beginning in 1997 (the low point was when the great “How Do I Live,” sung by Trisha Yearwood in Con Air, gets sunk by the massive iceberg that is “My Heart Will Go On”).

The ’00s were just weird — the Oscars finally noticed hip-hop’s existence as a movie-soundtrack staple (wins for Three 6 Mafia’s “It’s Hard Out Here for a Pimp” from Hustle & Flow and Eminem’s “Lose Yourself,” from 8 Mile) and bent a long-standing rule barring previously released songs so that Glen Hansard and Marketa Irglova could win for “Falling Slowly” from 2006’s Once. But awards also went to songs from Lord of the Rings: The Return of the King and The Motorcycle Diaries and An Inconvenient Truth that I’m pretty sure 90 percent of Americans would be unable to hum if their lives depended on it. Randy Newman, a 452-time nominee, wins his second Oscar in 2011 for a song from Toy Story 3; in 2012, in accordance with a newish and confusing Academy bylaw designed to prevent nomination-padding, only two songs are nominated — “Real in Rio,” from Rio, and Bret McKenzie’s The Muppets showstopper “Man or Muppet,” which ends up winning.

The issue here isn’t that the Academy is cluelessly overlooking tons of worthy original songs. (Although that did happen this year — the list of eligible 2013 songs included Rick Ross’s amazing Django contribution “100 Black Coffins,” Fiona Apple’s “Dull Tool” from This Is 40, and Katy Perry’s “Wide Awake,” all of which at least deserved the chance to lose to Adele.) The real problem is that they’re just not making “original songs,” as defined by the Academy’s eligibility requirements, like they used to back when Marvin Hamlisch was earning his EGOT. The occasional “Falling Slowly” or “It’s Hard Out Here” notwithstanding, the category now exists mostly to honor achievements in a phantom genre called “movie music” whose raison d’être is to grub for awards and make the Oscar telecast go by even more slowly. (It looks like this year’s show — produced by Smash’s Neil Meron and Craig Zadan and hosted by show-tune geek Seth MacFarlane — will be (a) 18 hours long, and (b) essentially indistinguishable from the Tonys, complete with gratuitous Kristin Chenoweth.)

It’s been almost 50 years since Mike Nichols cut The Graduate to preexisting Simon & Garfunkel songs, and nearly 40 since Martin Scorsese applied lessons learned from Kenneth Anger’s Scorpio Rising to the Mean Streets soundtrack, needle-dropping “Be My Baby” and “Jumpin’ Jack Flash” and creating a mixtape-as-score that changed the way filmmakers used rock and pop. There’s no Oscar for this kind of creative work, but there should be. Instead of — or, OK, fine, in addition to — a category honoring written-to-order movie songs, we need an Oscar for Best Soundtrack, one that would recognize the use of music in films regardless of that music’s provenance. We give awards to adapted screenplays; why can’t we honor the curatorial ambition and taste behind music-saturated movies like Django and Silver Linings Playbook or even Pitch Perfect, movies in which previously released songs are arguably as crucial to the storytelling as a traditional score would be?

We’d leave Best Original Score alone in this scenario, but soundtracks incorporating some original music would still be eligible for Best Soundtrack — if only because this would be a way around the dumb one-drop-of-repurposed-material rules that kept Jonny Greenwood from winning for There Will Be Blood and The Master. So if this category had existed in 1978, Saturday Night Fever — which mixed new Bee Gees songs with disco hits — would have boogied away with it. The 1985 race would have been a real barn-burner — Purple Rain vs. This Is Spinal Tap vs. Stop Making Sense vs. Risky Business vs. Footloose, although snobs would still have bitched that Repo Man was robbed. It would still be as injustice-ridden as any other category — there’s no way the Judgment Night soundtrack would have trumped What’s Love Got to Do With It at the ’94 Oscars, and Tarantino’s impeccable hipster crate-digging on Pulp Fiction would probably have been no match for the Time-Life steamroller that was Forrest Gump. Waiting to Exhale would have taken it at the ’96 awards, edging out Scorsese and Robbie Robertson’s soundtrack for Casino. If they gave this award out this week, the nominees might include The Master (which featured mostly new Greenwood music, one older selection from his piece 48 Responses to Polymorphia, and some period music from Ella Fitzgerald and Jo Stafford), Moonrise Kingdom (some Alexandre Desplat score, some Hank Williams, some Françoise Hardy), Django, and Silver Linings, with either Pitch Perfect or The Man With the Iron Fists in the fifth slot.

And here’s the great news, Oscar producers: If there’s one thing this category will lend itself to, it’s MEDLEYS. The staging of Silver Linings is a no-brainer — dancers in plastic bags run around holding their heads and freaking out while John Legend sings “My Cherie Amour,” then it’s straight into a big tango-inspired “Don’t You Worry ’Bout a Thing”/“Fell in Love With a Girl” number. Moonrise, I’m thinking guys in coonskin caps paddling fake canoes, some bird costumes — it’ll choreograph itself. I’m not sure what to do for The Master. Maybe something minimal, like a four-minute game of “From the Window to the Wall,” except instead of Joaquin Phoenix it’s Hugh Jackman. And if a Django medley happens in which Mumford & Sons play half of “I Got a Name” before a mink-draped Rick Ross rides in on a horse-drawn carriage doing “100 Black Coffins” while an Isaac Hayes hologram looks on approvingly, like the ghost of Ben Kenobi — well, look, it’s not my fault if you guys hate making history.

This article has been updated to correct a reference to Trisha Yearwood.

The Americans Season 1, Episode 4: 'In Control'

Inside ILM Part 2: The Evolution of Filmmaking Technology at Lucasfilm