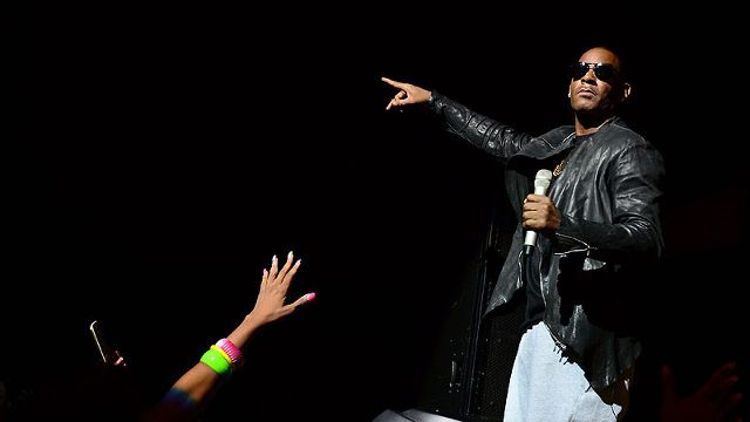 Album leaks aren’t my thing. I prefer to wait until the scheduled release date, at which time iTunes will tell me my preordered purchase is ready for download. But sometimes being a traditionalist is not possible. When there’s water dripping from your ceiling, you’ve got to get a bucket. R. Kelly’s Black Panties isn’t due out for another week, but someone forwarded me a link to the leak. So off to fetch a bucket I went. I wish I could say I hate myself for it, that it wasn’t worth contravening my commitment to legality. But if listening to Black Panties early is a jailable offense, then lock me up and throw away the key.

This album is a nearly perfect achievement of bluntness, literalism, and indefatigability. It’s just what you need after all the cuteness and pandering men are doing right now in popular music. For more than a decade, lust and carnality have been the women’s prerogative — Missy Elliott and Khia and Lady Gaga and Rihanna, with Madonna as the living legend and Peaches as high priestess. The men are really boys who are experts in adorability. And after you’ve listened to good artists sing about luck and heaven and putting on a suit and tie, you’ve just kind of had it. Justin Timberlake understands sexiness but knows nothing about sex. For Pete’s sake, he should be taking the suit and tie off.

R. Kelly has made a career — remember, he’s been at it since the early 1990s — out of exposing the lie of popular music. There are no blurred lines for him. He doesn’t mind making love. But he really likes to fuck. Kelly knows that if he’s going to do a song called “Mirrors,” it won’t be a metaphor for love or self-obsession or whatever it is that Timberlake is going on about. Kelly’s “Mirrors” would include cleaning instructions for the housekeeper and the mirror would be on the ceiling.

Black Panties should just be conceptual kitsch. You can read such song titles as “Legs Shakin'” and “Throw This Money on You” and marvel at the comical concision. But for 18 songs, Kelly manages to transcend the hilarious bluntness of the titles with actual songcraft. On one hand, something like “Crazy Sex” could probably exist on a Tumblr page of unrecorded R. Kelly hits. But one element of Kelly’s genius is that he knows he’s the purveyor of both outstanding music and alarming camp. He didn’t set out to produce the latter, but his music-video opera Trapped in the Closet achieved it regardless. Audiences who had never taken Kelly seriously as a musician — and still don’t — found a backhanded reason to adore him. Trapped in the Closet endeared him to people who saw nothing wrong with a little bump and grind because they had never truly seen R. Kelly. Most of those people were hipsters.

But when Kelly releases a record as beautifully sung and produced as 2010’s Love Letter, the hipsters are nowhere to be found. Kelly’s a joke to them — a locavore pop-up at KFC, a sexual deviant who gave them an uproarious mini-movie. The camp comes from the risk Kelly takes by refusing to be a joke to himself. “Throw Money on You” is just a song — a wonderful, not unfunny R&B song. A song that’s amazing not because Kelly is some R&B William Shatner but because he truly does want to throw money on this woman. Whoever she is, her prowess is that fantastic.

You believe in Black Panties because R. Kelly does. He loves, loves, loves having sex. With you. And you. And even you. You’re a woman with a vagina, and he adores that. You could be built like Nia Long or built like Mo’Nique — for all the specificity in an R. Kelly song, the woman could be anyone. There’s pathology there, for sure. But the music isn’t pathological. These are growlingly, mellifluously, purringly sung serenades over mid-tempo, quiet-storm beats. And the woman in his bed — or on his floor, his car hood, or kitchen sink — is neither object nor mere penis receptacle. She is something to live for, something to do, something that, like Kelly himself, needs to be done.

This is how you wind up with a track like “Marry the Pussy.” It is not a female metonym. It is a love song to her vagina. He really wants to marry that pussy. It’s a conceptual piece, really. It treats him as a woman would. It opens up to him. It feeds him. And in return, he’d like to ask for its hand in marriage. As he puts it, in the spirit of obviousness: “This is a sex proposal.” But it’s such a heartfelt plea that I found myself at lunch wondering: Will the pussy say yes?

Kelly is 46 now. He occupies an underappreciated place in the R&B/pop firmament, alongside Ronald Isley and pre–car accident Teddy Pendergrass, all sideways descendants of carnal wits like Bo Diddley. Kelly, of course, was the beneficiary of a more permissive climate. You could argue that he helped ease the standard. I was a freshman in college when “Your Body’s Callin'” came out in 1994, and I remember my jaw dropping when I heard it. Prince was obscene, but this was different. Prince forged that obscenity in a universe of his own creation. Kelly was subverting a ready-made sound. He was a sex vandal.

He steadily amassed a reputation for unseemliness — marrying a 15-year-old Aaliyah, writing and producing the title track of her first album, Age Ain’t Nothing But a Number, settling a statutory-rape lawsuit in 1998. He spent half of the last decade battling a battery of sex-offense charges. He was tried and acquitted. Yet a cloud of perversion hangs over him.

On Black Panties, he sounds as if he has recovered from a serious 2011 throat surgery. But he spends a song addressing the speculation that he’s over. It’s called “Shut Up,” and it’s a masterpiece of testimonial self-aggrandizement that needs to be heard to be believed. It begins with the shuffling of papers and culminates with Kelly asking rhetorically, “How many babies been made off me?” and then laying out a timeline of when the conceptions peaked. It’s here one has to ask what the difference is between an R. Kelly fertilization and one abetted by, say, Luther Vandross. Kelly’s recent duets with the likes of Lady Gaga and Justin Bieber point to his cultural relevance. But neither of those songs makes that point with as much lyrical dexterity and churchy affront as “Shut Up.”

This is not an album of begging, pleading, and heartbreak. It’s an album of assurances and aggression. It’s an album of making it rain. And as such, it showcases Kelly’s evolution as a freak. The man who once sang “I Like the Crotch on You” just wants to marry the pussy. And the women who once reminded him of his Jeep (“I wanna ride it”) now remind him of his Oreos. In the 1990s and the early 2000s, the graphic nature of these songs might have suggested that music had run out of ideas, that “I Wanna Sex You Up” was the end of pop. But Kelly took the frankness of that era and applied to it something direct: stardom. Sexy hits were largely made by groups (Color Me Badd, Jodeci, 112, Blackstreet, Kut Klose). He started in that sort of group (the Public Announcement), but made a career as a solo act. He would sing dirty records, but he wouldn’t hide in a quartet or trio. He would croon them right to you, and he would write them ambitiously. He’d be an NC-17 Babyface.

Black Panties isn’t as ambitious as, say, 2003’s Chocolate Factory or the 33 suites of Trapped in the Closet. But its intensely listenable, endlessly clever frankness suggests R&B still has new places to go, that there is sex R. Kelly somehow hasn’t had. What a tonic to hear all the no-no’s of commercial radio and polite conversation appear on one album, from a whole interlude in which the n-word is used at the end of every line to the appearance of words like “cum” and “dick.” For all the time that R&B spends talking about sex, Black Panties reminds you how rarely R&B concentrates on the sex people actually have: the breathlessness and soreness, the leg shaking, the terminology, the sheer exhaustiveness.

That is the source of the dissonance between the ridiculousness of the titles and the sublimity of the songs. Kelly is having it both ways. He’s having it all ways, really. From the front, from the back, from the side, middle, top, and bottom. Kelly has the key to locks you didn’t know you had. He says here he wants to make love to you in 50 states. He doesn’t specify whether they’re emotional states or the united ones. But there’s reason to believe he’d accommodate both. The question for me is whether he can accommodate a woman as out-there as he is. Gaga would be a good match. But she’s not that kind of freak. Could he handle a Peaches — another, more musically adventurous genius close to his age who shares his sense of lasciviousness and showmanship? She might expose him as tame by comparison.

But Kelly does bring out the excellent in some of his guest stars — Future, Jeezy, Juicy J, and best of all, Ludacris, who now sounds as if he knows how to please you with other parts of his body. This is what R. Kelly does. He elevates your game. You want to be your fittest, your friskiest, your most inspired. By the time “Get Physical” arrives toward the end, it’s tempting to say, “Kellz, I get the point. You want to get physical.” But the song is so undeniably about having sex again and again that you realize that, after all Kelly has said he wants to do to you, after all the parts of your body he’s slapped and licked and rubbed and tongue-Tasered, you’ve made it through the whole night and he hasn’t even pulled your hair yet! So you stay for that. I’m not Kelly’s type, and Kelly’s not mine (too much baggage). But that’s the power of the Black Panties experience. My leg shook, too.