My Grand Proclamation About the ‘Death’ of the Blockbuster: Steven Spielberg and George Lucas Predict the End 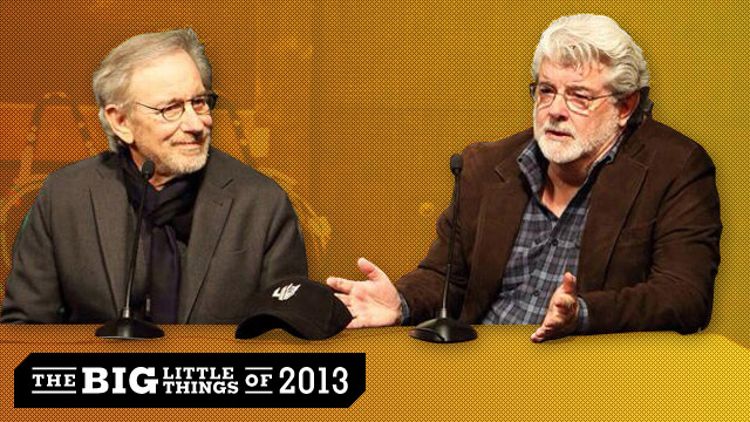 In June, Steven Spielberg and George Lucas, the twin kaiju who brought us the blockbuster movie, sat side by side and announced its imminent death. “There’s eventually going to be an implosion — or a big meltdown,” Spielberg said at an event at USC. “There’s going to be an implosion where three or four or maybe even a half dozen mega-budget movies are going to go crashing into the ground, and that’s going to change the paradigm.”

Within weeks, a funny thing happened. All these mega-budget movies started crashing into the ground. The summer of 2013 was thick with Story Gravity. After Earth didn’t just break Will Smith’s streak of no. 1 openings; it had a smaller domestic first weekend than Cloudy With a Chance of Meatballs 2. The Lone Ranger bombed. (Disney reportedly lost $160 million.) White House Down bombed. (Sony’s summer losses amounted to nearly $200 million.) Fans had to root for Asian audiences to save Guillermo del Toro’s Pacific Rim — the kind of “original, non-sequel” entertainment they supposedly craved. The carnage ended with R.I.P.D. losing more than $50 million. Jeff Bridges said, “For my mind, the studio made some, uh, choices that I wouldn’t have made.”

It certainly felt like a paradigm shift. And Spielberg and Lucas would know about such a thing. Nearly 40 years ago, they made Jaws and Star Wars and the Indiana Jones films, which helped bring an end to the adventurous American movies of the ’60s and ’70s. Now, Lucas and Spielberg were saying that the Blockbuster Age — our age — was tapped out, too. We were entering an undersea portal to another dimension.

Is the summer blockbuster really dead? There are caveats. People have been announcing the death of the blockbuster — artistically and commercially — since it began. In 1980, Pauline Kael declared, “Megalomania and art have become the same thing.” Our pal Mark Harris dated the death of the blockbuster to the May 16, 1986 release of Top Gun. And here’s … Steven Spielberg, back in 1997: “I think we’re at Defcon 3 right now. It’s kind of like India, where there’s an upper class and a poverty class and no middle class … And that is going to spell doom for everyone.” As any cult leader knows, you only get one shot at announcing the apocalypse.

People embracing Spielberg and Lucas’s prophecy seemed to have ulterior motives. Producer Lynda Obst (Sleepless in Seattle, How to Lose a Guy in 10 Days) told New York Magazine that blockbusters had helped wipe out women’s movies. “Chick flicks don’t tend to be sequel-izable.” Wait, are we trading the Blockbuster Age for the Chick Flick Age? Can we vote on that?

There was a sense in 2013 that audiences were finally fed up with all the sequel-reboot-of-a-comic-book movies. “Formulaic, you see, is no longer good enough,” a Huffington Post article argued. But in 2013, Iron Man 3, The Hunger Games: Catching Fire, Man of Steel, and Fast & Furious 6 made lots of money. All were — no judgments — the product of formulas.

For sure, there are lots of problems with blockbusters. First, just about every blockbuster minus Prometheus must be rated PG-13, meaning it’s stuck in a celluloid limbo state between the innocence of childhood and the glories of adulthood.

Second, blockbusters are too long. You could walk from the Shire to Erebor by the time the fucking Hobbit ends.

The third problem — diagnosed by Damon Lindelof, the Montgomery Scott of blockbuster scripts — is the idea that we’ve become so accustomed to grandiosity, so numbed by CGI explosions, that a movie can’t get made — can’t give us the essential “trailer beats” — unless it holds out the possibility of Earth exploding. “The Avengers aren’t going to save Guam, they’ve got to save the world,” Lindelof explained.

All fair points. But what we’re talking about in 2013 isn’t the imminent death of the blockbuster. It’s more like an operable cancer. It’s a sense that these movies aren’t connecting with us in a way they once did. That’s interesting. Let’s think about why that might be.

The coolest thing about Spielberg and Lucas was their promise of an endless childhood. The summer blockbuster has childlike morality (in this universe, Chris Nolan seems like Nietzsche); childhood source material (radio serials, comics, graphic novels); plus, lots of actual children — we’re told, over and over, that the studios’ ideal moviegoer is the 13-year-old boy.

We love blockbusters that came out during our 13-to-18-year-old primes. Maybe that was the ’70s heyday of Jaws and Star Wars. Or the fabled Summer of ’82. (A summer full of sequels and reboots, by the way.) Or for us younger kids, the underrated 1989, with Batman, The Abyss, Indiana Jones and the Last Crusade, and Honey, I Shrunk the Kids. To slip those Blu-rays into the player is to exhume your pimply former self. But exhuming that kid every summer, with the opening credits of each new blockbuster, is impossible. In that sense, the promise of an endless childhood turned out to be a lie.

Look, I love blockbusters. I don’t want to grow up and watch The Best Exotic Marigold Hotel. But even I’ve begun to feel a disconnect. I, Robot (2004) was a particular downer. Like Lethal Weapon’s Danny Glover — see how easy it is to travel back to your sweet spot? — I thought, I’m too old for this shit. I’m still waiting for someone to explain Prometheus — not the Engineer’s ponderous backstory but the script’s. Then there was Star Trek Into Darkness, an exercise in which the filmmakers changed one “beat” from a classic movie and acted like they’d created something fresh.

Like Kirk in The Wrath of Khan — see? Better — we older kids of the blockbuster generation are left with a sense of temporal displacement. The reboot concept doesn’t help. It’s merely a confirmation that your memories are drying out and curling like the edges of a vintage movie poster.

I suspect that Lucas and Spielberg feel this, too. They’ve become — though this would make a ’70s auteur laugh — too artistic for the Blockbuster Age. “We’re talking Lincoln and Red Tails — we barely got them into theaters,” Lucas grumbled at USC. “You’re talking about Steven Spielberg and George Lucas can’t get their movie into a theater.”

He added, “I think eventually the Lincolns will go away and they’re going to be on television.”

“As mine almost was,” Spielberg said. “This close — ask HBO — this close.”

Yet just five years ago, Spielberg and Lucas were making Indy 4, a movie that easily got into theaters and totally missed the mark. Remember Shia LaBeouf’s perceptive remark: “I just feel like we were trying to enforce innocence on an audience that wasn’t willing.” The audience now gets its innocence from the Marvel Universe.

By announcing the “death” of the blockbuster, we mistake our own gray hairs for a paradigm shift, and our own quirky film passions with the universe’s. An era of moviemaking hasn’t ended. The ability of some of us to love blockbusters unashamedly, and make them effortlessly, has.

OutKast, the Walkmen, and Why Bands Can't Simply Break Up Anymore