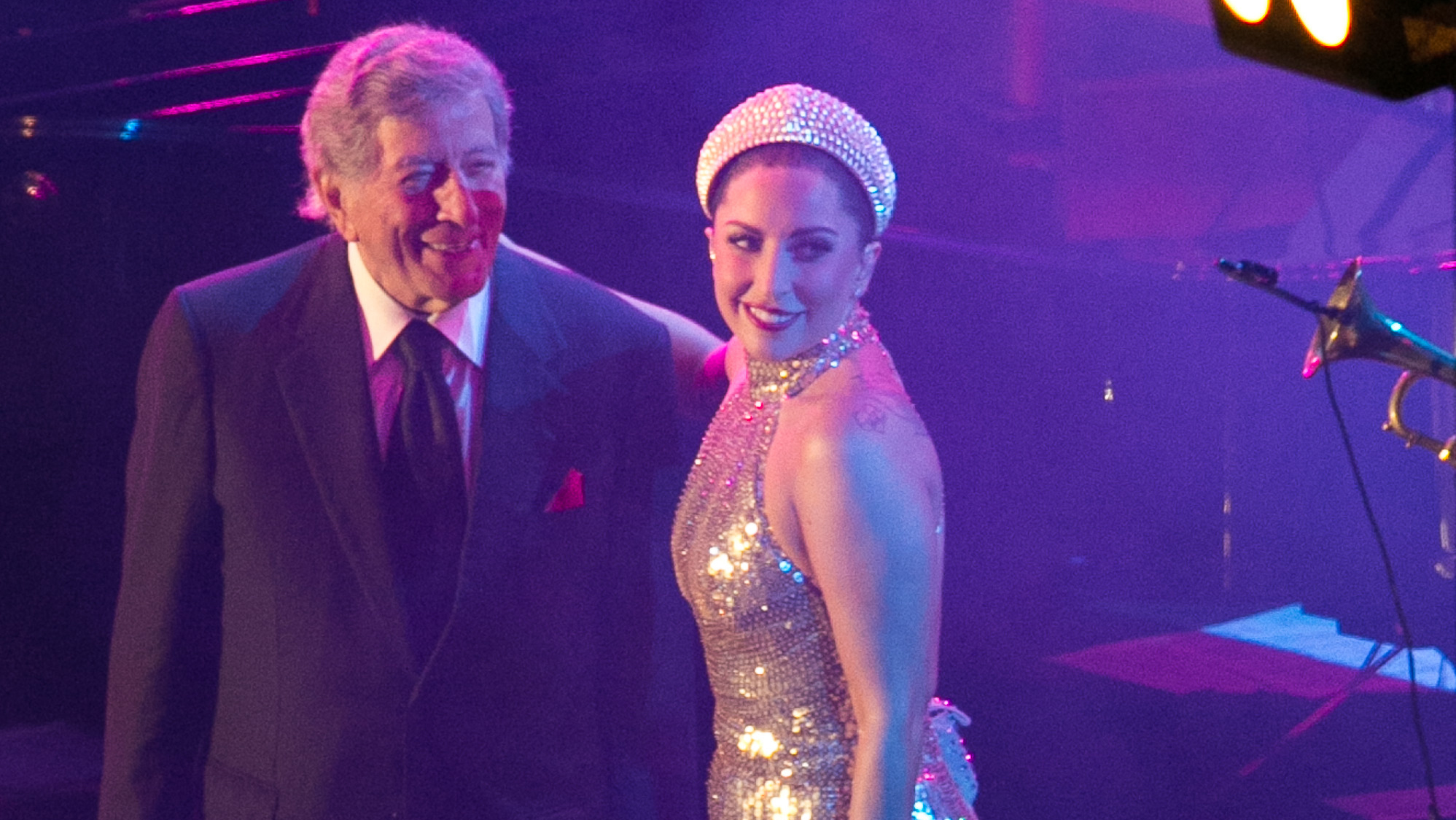 Lady Gaga has always existed on an accelerated timeline. Ever since Stefani Germanotta became “Lady Gaga” nearly a decade ago, she has constantly evolved her persona (with physical transformations to match), emulating the careers of Cher and Madonna. But while pop stars in the ’80s and ’90s moved at the pace of the print media cycle, Gaga is a pop star for the 2000s, operating at the high speeds of the Internet’s news cycle. Madonna had a new look for every album. Gaga changes her look every single day. Her persona’s multiplicity feels like a reflection of the social-media-infested times. She is searching for her identity through performing every possible iteration of it, in public and documented from all angles. She debuts new signature accessories almost faster than fans can keep up; by the time you could easily purchase hair bows made out of fake hair, like the ones Gaga wore when she first appeared, she had already moved on. At first, this extreme mutability seems like Lady Gaga’s ace — she can outrun being associated with any one sound or trend — but it has become a double-edged disco stick. She moves through the phases of a pop star’s career at hyperspeed: struggle, triumph, reign, slump, comeback, has-been. She saturates pop culture so quickly that the backlash also occurs at an accelerated speed. How can she possibly stoke any kind of mysteriousness or desire for her return when she never went away? Her inability to slow down also seems endemic to her form of pop stardom. It’s as if she were afraid that if she were to stop performing for one moment, we’d forget about her and replace her with a newer model.

While Gaga’s Eurotrashy pop aesthetics were relatively fresh to Americans in 2008 when The Fame came out (and truly, Kylie Minogue already had that sound on lock in Europe), pop culture morphed around her in imitation of her success. The Fame Monster was a brilliant turn from Europop effluvia into a dark pop riff on industrial German techno, but by the time Born This Way was released in 2011, Gaga backlash was in full throttle. The glam-rock-inspired themes that she worked with extensively on The Fame and The Fame Monster — celebrity, wealth, and sex — felt played out, and her attempt to rally her fans toward political activism with the call-to-equality single “Born This Way” seemed like a cynical and ill-informed attempt by one wacky white lady to use queer identity politics as a cash grab to further her own fame. Born This Way received the brunt of criticism for Gaga’s sophomore slump, as the quickening fame cycle caused fans and critics who had championed her as a laudably ambitious underdog to denounce her as an overexposed fraud. Artpop, her third album (if you count The Fame and The Fame Monster as one double album), was rolled for underperforming commercially and being overhyped by Gaga before its release. Despite some strong songs and a charming Muppets Holiday Spectacular, Gaga fatigue was still in full effect. People were bored of her over-the-top stage act and clubby musical milieu. The never-ending identity changes had become boring. Gaga had always played the gap between the wig-changing alien she becomes onstage and the normal everyday gal who likes to hang out at dive bars that she claimed to be offstage. With a lavish Hearst Castle–set video for “G.U.Y.,” Gaga took her glamorous avatar to its furthest extension yet. But nothing, no amount of dancing or outfit changes or exuberant chord progressions, could recapture the thrill of “Bad Romance.” The outlandish aesthetics meant to free one’s inner freak had become a cage.

By the time she got to Artpop, Gaga was already in a phase reserved for most popular musicians much later in their careers. She was accused of being bloated, both musically and physically, berated for having lost the plot to what once seemed like an expertly planned nonstop trajectory, and criticized for losing the carefree quality of her first album and becoming overly pretentious. All of these criticisms were subjective, but Gaga clearly took them to heart. Her always contradictory messaging became even more garbled; she encouraged body acceptance at any weight among her fans while posting flattering skinny-angled selfies on Instagram to prove that she wasn’t that much bigger. She continues to align herself with anti-bullying campaigns but collaborated with accused sex offenders R. Kelly and Terry Richardson without acknowledging the allegations. By the time she dropped R. Kelly from her would-be hit single “Do What U Want With My Body,” scrapped the Richardson-lensed video for the song, and collaborated with fellow struggling pop star Christina Aguilera (whose once-thriving career Gaga had earlier been accused of sticking the final stake in), it seemed too late. The passage of time was a factor as well. Some of Gaga’s Little Monsters had already outgrown their heroine and her increasingly desperate pleas for their love.

And so Gaga set out to reinvent herself yet again. Like her hero David Bowie, who transformed from the glam Ziggy Stardust into the austere Thin White Duke, she had ridden a glitter lightning bolt to its furthest point and had no choice but to wipe the slate clean and start over from scratch. Gaga’s announcement that her next project would be an album of duets with Tony Bennett made a kind of perfect sense. What does a star do when their pop vibrancy has faded and they face the threat of being replaced by a new, younger crowd? They move into an older market, of course! Gaga’s decision to work with the 88-year-old legend felt like a logical extension of the unplugged piano jam versions of her pop hits she had always done. Working with Bennett was a chance to prove that she was a talented singer who wasn’t only reliant on stunts, wigs, and of-the-moment producers. It also felt like a very smart way to circumvent the question of how the now-28-year-old Gaga could possibly continue to keep topping herself into her thirties. Having taken off all her clothes, literally and figuratively, so many times, there was only one way to go: to cover up.

Gaga’s aesthetic has always bordered on “jazz hands.” She didn’t have to travel that far to reach actual jazz standards, with the cosign of no less than Bennett. It’s similar to the strategy successfully adopted by another false-named musician who would rather not be a pop star all her life, Lana Del Rey, earlier this year. By removing herself from the “pop” conversation entirely, Gaga asserts her longevity as a career musician beyond genres. She can’t be written off as disposable, only out of fashion. And by going so out of fashion as to leave pop altogether, she brilliantly opened a whole new pathway, one in which selling 131,000 records is a triumph because it is a jazz record.

I, for one, was pleasantly surprised by Bennett and Gaga’s Cheek to Cheek. I had harbored fears that it would be a corny, cynical cash-in, especially since I heard my first song from it, “Anything Goes,” at Starbucks. Instead I was so captivated that I went home and bought the album and listened to it all the way through. It happens to be great — minimally produced and stocked with brilliant session musicians. It sounds live and spontaneous, and if Gaga is trying a little bit too hard to be on Tony’s level, she still shows off a playfulness that has been missing from her pop work of late. She is purposely restrained, and it pays off on covers of “Nature Boy” and “Lush Life,” which demonstrate new depth to her singing. Bennett is great too. The whole album is like a big “fuck you” to pop’s ageism. Tony Bennett is 88 and he sounds better than anybody. The album is charmingly free of AutoTune, and the occasional off-note or wolf tone on an attempted harmony reinforces the human feeling and sound of the project.

Gaga and Barbra Streisand are both releasing duet albums this quarter, and grouping Gaga with Streisand feels right somehow, in a way that grouping her with Ariana Grande no longer does. Gaga has always seemed a little bit like a kooky old lady. With Cheek to Cheek she leans into her weird old lady side fully, and it feels oddly authentic, despite yet another disguise. Even Gaga’s makeunder involves wigs. This time, instead of Lady Gaga blonde, she has put on large, frizzy, curly brunette wigs, paired with dark eyebrows and ’80s makeup. Her jazz look specifically evokes Cher in Moonstruck, and it was not all that surprising when Gaga admitted that the wigs were, in fact, borrowed from Cher. Maybe Gaga’s new incarnation as a salt-of-the-earth Italian American New York girl with a heart of gold is just copped from Cher’s revelatory performance as Loretta Castorini in Norman Jewison’s 1987 movie. She’s admitted before to taking parts of her affect from Marisa Tomei in My Cousin Vinny and Miss Adelaide in Guys and Dolls. So maybe the new jazzy Gaga isn’t exactly the real Gaga either. Who cares?

Despite the constant physical transformations, a few aspects of the Lady Gaga persona have been constant. They seemed to represent the Germanotta lurking underneath the Gaga: a bubbly performative New Yawk affect, a theater kid’s constant need for attention, and deep insecurity masked by extreme confidence. The exaggerated artificiality of her physical presentation was in tension with her desire to seem down to earth and approachable to fans — bigger than life, but still the girl next door. Something else has been constant, something that this new album brings to the fore. The Cheek to Cheek cover of “Goody Goody” reminded me of a movie called What’s the Matter With Helen?  — a late entry in the genre known as “psycho-biddy,” which took “Goody Goody” as its theme song. I have always associated Lady Gaga with psycho-biddy, which is generally traced to the Bette Davis and Joan Crawford movie Whatever Happened to Baby Jane? Its campy acting, melodramatic plotlines, dark humor, and sometimes very bloody incidents partially conceal that it is about the very real cultural horror of women aging out of the childbearing years. Psycho-biddy portrays old women as bizarre, often mentally unstable grotesques, who are often somehow strangely sympathetic. Perhaps that’s because portraying old and ugly women as the protagonists at all grants the women a measure of cultural dignity they are usually denied. Actresses like Davis, Tallulah Bankhead, and Shelley Winters gave indelible performances in psycho-biddy movies long after the prestige portions of their career were over. Playing unbeautiful yet somehow appealing monsters was, after all, a privilege usually afforded only to men. In showing us women who refuse to conform to society’s conventions, psycho-biddy humanized them. Lady Gaga is torn, like all women, between trying to please society with conventional prettiness and giving in to her uglier, more monstrous, un-self-conscious side. With the invention of Jazz-ga, perhaps she has found a way to split the difference.

Consider the Log Lady: Questions (and Answers) About the Return of ‘Twin Peaks’