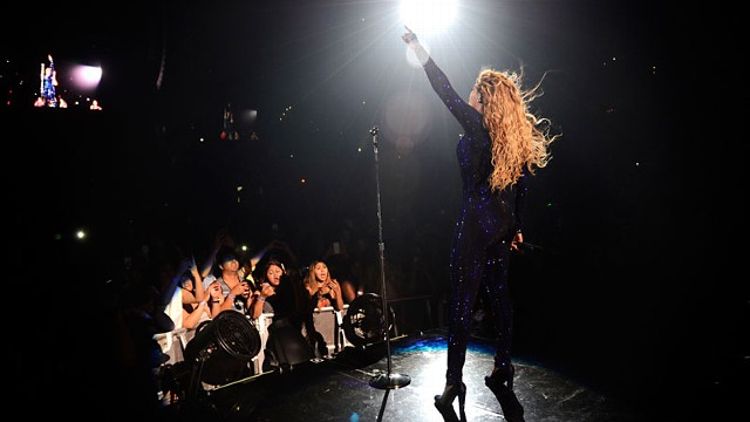 If it comes as a surprise that Beyoncé finds herself at no. 1 again, you’re an easy-to-surprise person who’s going to have a great Christmas where every gift seems miraculous. But yes, Beyoncé is Beyoncé’s fifth time debuting atop the Billboard 200, making her the first female artist to hit no. 1 with her first five albums. She’s also one of only three acts to perform the feat; the others are DMX and a 1950s/’60s folk group called the Kingston Trio. Bey is looking at the largest “sales week” for a woman in 2013 and “the year’s fourth-biggest sales week overall.”

I place those terms in quotes because the crusty old music-tracking establishment, much like the Gregorian calendar, counts its so-called “weeks” on a strict Monday-to-Sunday basis. And Beyoncé air-dropped to the Internet on a Friday, so it only gets to count 617,000 copies, making this the first three-day week no one could get excited about. And thanks to those technicalities, Yoncé’s game changer falls fourth on the year behind Justin Timberlake’s first 20/20 Experience album (968,000), Eminem’s Marshall Mathers LP 2 (792,000), and Drake’s Nothing Was the Same (658,000). Hunt around the Internet this Friday night/Saturday morning, though — you’re gonna find seven-day tallies that unofficially/officially put Bey in the top spot. Or at least higher than Aubrey.

Beyoncé, which was launched as an iTunes visual album and will only begin hitting the kind of stores you drive to today, also stands as iTunes’s fastest-selling album ever. Globally, 828,773 copies were purchased in the first three days. Beyoncé’s previous high was her sophomore album, 2006’s B’Day, which debuted with 541,000 sold. Two and a half years ago, 4 moved just 310,000 copies in its first week. Other fun stats: Beyoncé is one of two digital-only albums to go to no. 1, the other being 2010’s starry Hope for Haiti Now. Beyoncé also holds the second-place spot for digital sales weeks, behind Lady Gaga’s Born This Way, which moved 662,000 in 2011, although 440,000 of those came from a 99-cent deal on Amazon.

If you need more of a rundown on why Beyoncé has been such a success, Steven Hyden has got you. If you need further analysis on exactly how badass it was that Beyoncé last-minute-ninja’d the year away from Katy Perry, Miley Cyrus, Lady Gaga, Britney Spears, and Lorde, Molly Lambert has got you. And if you just need “Flawless” GIFs by the truckload, Tumblr has got you.

Update, from the New York Times: “On Wednesday, Apple and Columbia confirmed that the album had sold one million copies around the world.”

My Couple I Wish Were a Real Item Because They're So Beautiful Together and Make Me Believe in Love: Miguel and Janelle Monae on 'PrimeTime'