My Couple I Wish Were a Real Item Because They’re So Beautiful Together and Make Me Believe in Love: Miguel and Janelle Monae on ‘PrimeTime’ 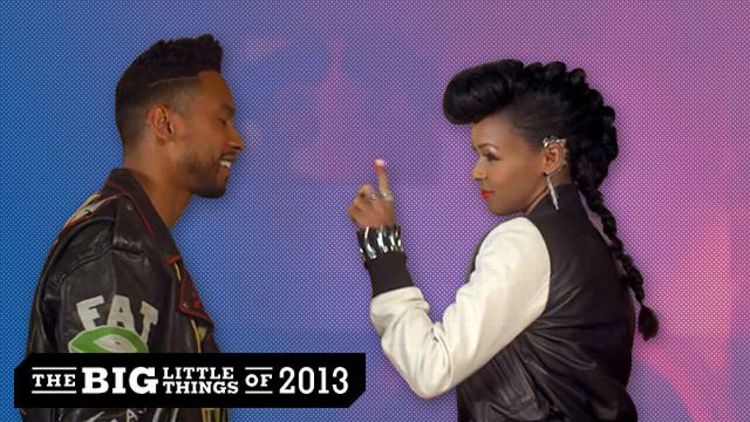 It’s just 30 seconds, but that short period of time captures one of the most soulful, captivating moments in music in 2013.

After trading verses, Janelle Monae and Miguel come together to sing the song’s chorus. But it’s more than just singing the same words at the same time. They’re wailing. And their voices sound almost too perfect in unison, as if they were meant to be together. Like they’ve been doing it for years. You repeatedly listen to it, sometimes isolating just Miguel’s part and other times Janelle’s, and you’re dumbfounded by how pure their voices are. And how effortlessly it seems to be flowing. And, within that effortlessness, how impassioned they are in their delivery. You turn up the chorus as loud as you can stand, letting the sound — their sound — wash over you. And it’s overwhelming — the volume, yes, but also the feelings it induces. Because it feels authentic.

Growing up, I thought Donny Hathaway and Roberta Flack were madly in love with one another. “Where Is the Love” and “Be Real Black for Me” sparked the belief, “You’ve Got a Friend” was confusing, until I remembered your truest love should be your best friend, and “The Closer I Get to You” firmly sealed the deal.

Donny: “The closer I get to you. The feeling comes over me.”
Roberta: [Whispered] “Me too.”
Donny: “Pulling closer — ”
Donny & Roberta: “Sweet as the gravity.”

They were soul songs of companionship that hinted at passion, a passion I couldn’t help but believe was directed at the fellow harmonizer, trader of verses, and sweet singer of sweeter somethings.

For a while, this youthful, socialized view equating the male-female duet to love followed suit with a number of such pairings that were standards on slow-jams radio, from Lionel Richie and Diana Ross’s sweet “Endless Love” to Rick James and Teena Marie’s lustful “Fire and Desire” to Keith Sweat and Athena Cage’s bag of sex “Nobody” to the entire Marvin Gaye and Tammi Terrell catalogue.

But over time, the illusion was crushed. Knowledge will do that to naïveté. With age, you learn that many members of popular duets probably had someone else on their mind when they were singing those lyrics, even as they stared longingly, belting at their counterpart.

Even as the years progressed, with that knowledge increasingly clear, my desire for the love illusion remained. It remained even as R&B duets fell by the wayside to make way for the rise of the male rapper–female singer “collaborations” — a cooler word for “duets” — of the 1990s and 2000s. You knew Jennifer Lopez and Ja Rule wasn’t going to happen, but what if? As small and fleeting as it was, that What if? increased the emotional investment of a song like “I’m Real.” Or a “Dilemma.” Or, more impressively, Method Man and Mary J. Blige using multiple Gaye and Terrell interpolations for 1995’s “I’ll Be There for You/You’re All I Need to Get By.”

Even if Meth and Mary weren’t a thing, between the song and the accompanying video, there was a world you could create in which they were.

The sung R&B duet didn’t fully die out during this era of rap-singer partnerships, however. In technical terms, “duets” were happening, but they were missing something. Typically, they felt like songs that simply happened to include a man and a woman. Rarely did it seem as if the actors were singing at one another. The pervasive trend was just that: acting.

When Rihanna and Ne-Yo joined forces for 2007’s “Hate That I Love You,” the catchy hook, acoustic guitar, and hand-clap turned the one-night-stand spawn of “Sexy Love” and “Irreplaceable” into an excruciatingly popular song. By no means was it the chemistry between the two singers. There was no illusion of intimacy to break, because it never existed. “No Air” was another example, this time inching slightly closer to that illusion, with potential heat simmering in the voices of Chris Brown and Jordin Sparks, but again the end product could have been completed with any two popular young singers of the time.

Truthfully, it’s been awhile since a popular R&B duet seemed deserving of a mention within the canon of real duets. The last big moment was 2004, when Usher and Alicia Keys peaked simultaneously with Confessions and The Diary of Alicia Keys and dominated the year. And then there was “My Boo,” their duet from Confessions that’ll go down as one of the biggest songs of the decade. While a great track, a tragic consequence of its popularity was the way it overshadowed their other 2004 duet, the remix of Keys’s “If I Can’t Have You.”

It’s unfortunate, because “If I Can’t Have You” is the better song of the two, one of the last, great, true popular R&B duets. The original was already one of the better-sung songs in recent memory, but with the addition of Usher, a moment was created, one of two artists at the respective heights of their careers, sounding as if they were in love — not just with anyone, but with one another.

And within that moment, the moment. It’s only 50 seconds, but that’s all the time necessary to turn this from just a remix into an important duet.

Some people want it all
But I don’t want nothing at all
If it ain’t you, baby
If I ain’t got you, baby

Some people want diamond rings
Some just want everything
But everything means nothing
If I ain’t got you, yeah

After trading verses, the two finally meet and begin singing together, climaxing with a twice-sung performance of this chorus. They’re belting, then there’s a key change, and with that, the second chorus only intensifies. And at this moment, you forget it’s a remix with a male singer, because this feels like the only version of this song that’s ever existed. The illusion appears to be a reality, because for 50 seconds, Alicia and Usher sound like each other’s “you.”

Perhaps it is a coincidence, but it’s worth nothing that Janelle and Miguel’s “Primetime” follows the exact same structural formula, and the end result is equally powerful and convincing. Upon first listen, my first reaction was “I want this to happen,” the “this” being Miguel and Janelle. You want the interesting ones to find each other. And love each other. Because they deserve each other. And like that, everything you know or assume about the two goes out the window, because of what you just heard and felt in the song’s defining moment.

After that moment in the “If I Ain’t Got You” remix, the song quickly calms down and ends, almost as if the singers are spent and need a cigarette after those 50 confessional seconds. “Primetime” also has an immediate falling-off, followed by nearly two minutes of song. While this portion is the least captivating part of the track musically, the lyrics and video for this final act are the most interesting part.

If the illusion is at its height with the two singing at each other during the chorus, it begins to dissipate once Janelle starts talking.

It sounds like she’s reading her old middle school love notes. Her speaking voice, saying loving words, is the opposite of her singing voice. When sung, her apparent love is confident and strong, but when spoken, it’s self-conscious, shy, juvenile, cute.

And then you watch the video during this period. The two look like teenagers on a first date, awkwardly laughing, occasionally catching each other’s glance, sometimes holding hands, but ultimately enjoying an extremely tame night out on the futuristic town. By 2013 standards, it’s the opposite of sexy.

In this, the lovey-dovey illusion of duets past was broken. But the chemistry somehow still remained.

That enduring chemistry set it apart from many of the year’s other R&B duets. Sevyn Streeter and Chris Brown’s “It Won’t Stop” was built for the radio, but there’s a noticeable disconnect between the protagonists (another example of a song that began as a solo project and added the male part later). Mariah Carey and Miguel’s “Beautiful,” while initially exciting because it’s Emancipation of Mimi–sounding Mariah, lost steam quickly upon the release of the video, due to a certain unsettling Stifler’s Mom–and–Finch dynamic between the two. And Alicia Keys and Maxwell’s “Fire We Make,” while more overtly sensual, a testament almost solely to the power of Maxwell, never fully crescendos, choosing to stay comfortably in the cat-and-mouse-chase zone for the duration of the song.

The combination of Janelle and Miguel for a love-song duet, on paper, before hearing a note, is already an interesting one. Long before they’d established themselves, the discussion surrounding their sexual preferences swirled. Their styles have been labeled everything from “futuristic” to “androgynous,” but many have openly taken this to simply mean “not heterosexual.” While both have deflected these questions over the years — their responses haven’t been so much defensive as “Can we talk about my music, please?” — that unfair, distracting cloud of personal intrusion continues to hang over the two, making its way into this collaboration. Even if just for a second, the thought does pop into your mind as you watch the video, notice how they interact, and listen to the words in their verses, ultimately culminating with the idea of them singing to each other.

Based on one’s preconceived notions of Janelle and Miguel, you could think the idea of them singing to one another in a loving way is so far-fetched, it’s laughable. You could even take a conspiratorial route and suggest their duet is a way of getting people off their backs about their sexuality.

Or you could turn the song up again and treat it for what it is, the best duet of 2013. The most loving, compassionate, authentic duet in some time. Sure, the traditional idea of a man and a woman falling in love over the course of a song will always register for me in some capacity, but it’s no longer the be-all, end-all. And it certainly isn’t the only configuration for two people to sing about love.

The illusion of their love was present in “Primetime.” And even if it diminished, as with all the great duets, it didn’t matter. The recipient of Janelle and Miguel’s love in this song doesn’t matter. All that’s important is that it sounds like love, because it comes from love. And for those 30 seconds, love isn’t an illusion. It’s real.