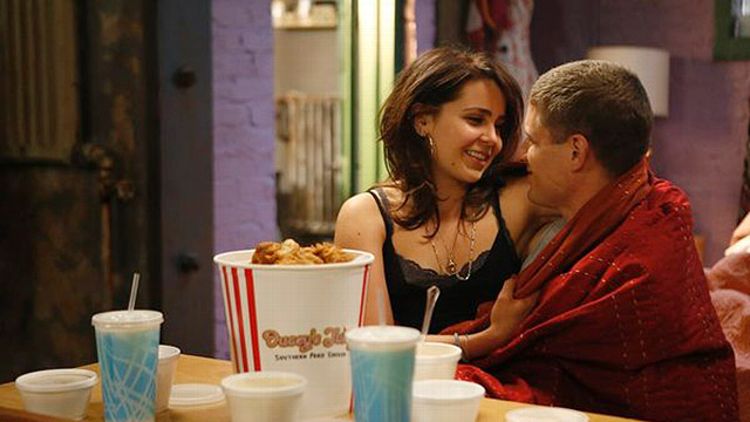 This week on Parenthood, the four Braverman siblings were all dealing with new realities. Crosby has a screaming baby that can’t be pacified. Julia is unemployed and there’s no other honest way to put it. Adam is living in a post-cancer world, but he’s still in fear. Sarah’s daughter is engaged to a guy Sarah barely knows. Poor Bravermans! The marital problems that await Julia are too devastating to ponder in Episode 2, and I was too busy laughing at the fake crying audio track to really sympathize with Crosby. Thus, all of this week’s cry moments came from the older Bravermans worrying about their loved ones. Prepare yourself for this emotional journey.

It’s hard to dispute Crosby’s (Dax Shepard) status as top Braverman, but Amber (Mae Whitman) has always been a strong challenger. Through four seasons, the character successfully toed the hipster stereotype line, playing the wise daughter and sister. And now all that is falling apart. Amber’s engagement to Ryan (Matt Lauria) is ruining her character. This week mom Sarah (Lauren Graham) incepted Amber with the idea that the proposal was not sufficiently premeditated and planned out, which led Amber to ask her fiancé when and how he decided to do it. The conversation itself was not cringe-inducing, but Amber delivered her queries with a high-pitched, unrecognizable tone. I hope these two break up soon, so Amber can return to her mopey guitar-playing ways.

I have a lot of questions about Hank. Last week’s episode implied that Sarah didn’t know Hank was back in Berkeley, but this week he waltzed into her superintendent apartment bearing a pink ocean candle. Their conversation suggested they’d previously discussed their status as friends. This arrangement was a surprise to me, but I accept all appearances by Hank. They quickly fell into their syncopated rhythm of conversation. Hank committed an unannounced pop-in (far too common on television), rightfully assuming Sarah was not happy about Amber’s engagement. The unusual beats of their dialogue would be a distraction were the scenes not so glorious. The only negative about Ray Romano on Parenthood is that one day he won’t be on the show, and we’ll have to live with that.

As Max astutely pointed out, weddings “make people happy.” This emotional power was in play when Sarah showed up at Amber’s apartment to ask if Ryan is the man she wants to spend the rest of her life with. Amber replies with a resounding yes, prompting Sarah to deliver a speech about the tragic skort she wore at her courthouse marriage. Then she pulls a Mary Poppins, grabbing a stack of bridal magazines and two bottles of liquor from a bag that did not seem capable of holding so many bulky items. The physics of handbags aside, it was a sweet moment that I am hoping belies the impending broken engagement.

For the second week in a row, Adam (Peter Krause) comprises one half of the cry moment pas de deux. Kristina Braverman (Monica Potter) is running for mayor of Berkeley. With no experience as a public servant, she’s enlisted Heather Hall (Friday Night Lights and Full House alum Jurnee Smollett-Bell) to run her campaign. Adam rises to the occasion, doing his part to retain his crown as most uptight Braverman. He doesn’t think the campaign is a good idea, and ultimately his passive aggression turns to true aggression. The couple fights in the kitchen about whether the campaign is a good idea so soon after her cancer fight. Ultimately Adam exclaims, “You almost died!!!!” And in that moment, any contempt for Adam slips away as the audience is reminded he is the ultimate family man. Of course he doesn’t support this. He’s concerned about her health! There’s a lot to nitpick about Adam, but the irritating aspects of his personality consistently give way to the emotional scenes that make this show great.