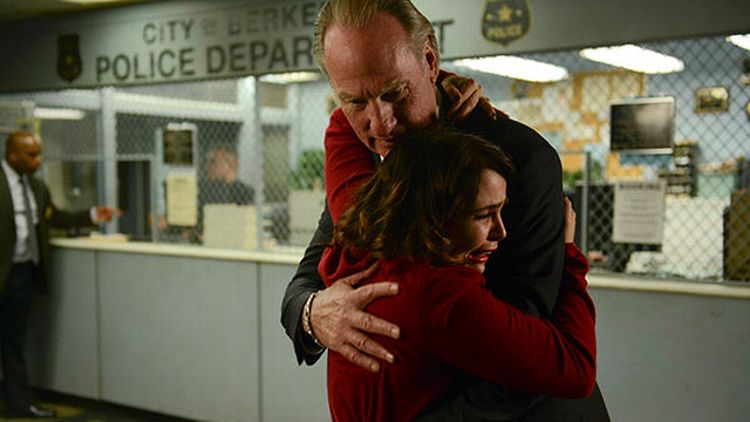 It’s Election Day in Berkeley! Thankfully, this means the mayoral race plot ended this week, and it meant that all Bravermans were present for the after-party, win or lose. Bravermans are kind of like the Captain Planet kids. When their powers combine, the family is strong enough to overcome losing an election, bar fights, and (hopefully) domestic discord. Go Bravermans!

When I’m trying to evangelize about Parenthood, my pitch goes something like this: Even though the situations may be melodramatic, it hits the right notes emotionally. I can’t attest to the veracity of Joel and Julia’s weekly fighting, but watching the slow simmer of tension feels painful and real. We’re now nine episodes into Season 5, and though neither has cheated (yet), I wonder if their marriage is irreparable. This week, Victor moved back to fourth grade. He throws a tantrum, there’s yelling, and Julia can’t reach Joel. For some reason that compels her to storm into his office and demand his attention, while his boss/temptress is present. He shuts her down, so they both end up embarrassed and angry. What a mess. The worst part is that when they try to talk it out, they fail to reach a détente. Joel storms off. He argues that he gave Julia nine years to work while he stayed home, but their life was much quieter before adopting Victor. Even if Joel supports his kids without fail, he doesn’t account for the increased difficulty of staying home with Sydney and Victor. It’s hard to pick sides here, but Joel does not help his own case by walking away.

There’s a lot to be happy about this week: Kristina lost the election (we knew she would), Ryan got arrested, Crosby paid a stranger to vote for Kristina, Hank existed. There was a true cornucopia of enticing plot developments, but as per usual, Hank stole the spotlight. His daughter Ruby visited from Minnesota, and she showed up in a San Jose Sharks shirt. Since Max also likes the Sharks, he decided to ask her to be his girlfriend, to which she promptly said no. Hank responds by (1) asking his daughter to say yes because she’s going back to Minnesota soon anyway, (2) storming into Sarah’s apartment seeking advice about how to handle his daughter, and (3) delivering a soliloquy to Max about what dating is supposed to be about. Hank makes Max feel normal, like there is a brotherhood for men like them. Max even manages to say “thanks” after the pep talk. How much longer do we have to wait until Hank and Sarah are back together?

Kristina lost her mayoral campaign. I’m relieved that the fictional voters of Berkeley, California, chose experience over sentiment. Lest the campaign be all for naught, Election Day offered multiple moments to remind us how unlikely Kristina’s campaign was to begin with. First, Adam tells her he didn’t want her to run. Then her chemotherapy buddy leaves the hospital to vote. And then there was her speech. Kristina reunites with the mother who asked the moving question at the debate a few weeks ago about education and her deaf daughter. Kristina changed this little girl’s life. The whole interaction was undeniably cloying, but Kristina has emerged as the Braverman MVP. Even when her story line is illogical or overly saccharine, she’s a steady presence. Important question, though: Where was Haddie? Even if Sarah Ramos is not on this show anymore, wouldn’t Haddie show up to vote for her mom? Bring Haddie back! What did Sarah Ramos do to deserve this?

There’s something about seeing Amber cry. After her fiancé beat up one of the band members, a.k.a. a client of the Luncheonette, Amber ends up at the police station. Grandpa Zeek comes, presumably to bail out Ryan and help out Amber. Amber starts apologizing, even though she didn’t do anything wrong. It’s a short moment, but it’s Zeek and Amber at their best — with particularly impressive sobbing by Mae Whitman. There is nothing restrained about crying, just as there was nothing restrained about Ryan brutally punching the nameless musician guy.