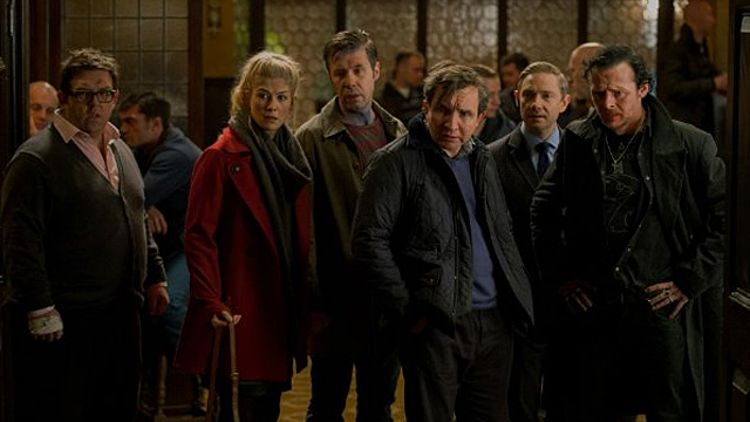 When it comes to the “Cornetto Trilogy” — the three films written by Edgar Wright and Simon Pegg, directed by Wright, and starring Pegg, Nick Frost, and a repertory company made up of some of the leading stars of contemporary British comedy — reasonable people can disagree about whether Shaun of the Dead (the first installment) is better than Hot Fuzz (the second) or vice versa. But we will probably all agree that The World’s End is the worst.

Pegg headlines End as Gary, a degenerate addict still pining for the victories of his youth in the idyllic small town of Newton Haven. He decides he needs to recapture his former glory by reuniting with his four best friends from the old days (even though none of them has spoken to him in years — for good reason) and making another attempt at an epic crawl through all the town’s pubs. For some reason, the other guys all agree, and all immediately regret it, because Gary is a mess and hanging out with him is no fun. Less fun is the fact that no one in town seems to remember them from their adolescence, and that all the pubs have had their old character renovated out of them. Things get even worse from there.

If you’ve seen either of the first two Wright/Pegg/Frost films, you can probably make a reasonable guess as to how things get worse — and if you’re a fan of those movies, you’ll be waiting for the real story to get rolling for a while. Furthermore, building the film around a character as relentlessly unlikable as Gary is a daring experiment, but one that’s just as exhausting to watch as spending time with Gary seems to be for his old mates. You might think you need closure on the Trilogy … but since it’s not even really a trilogy at all, I promise that you don’t.

Wesley Morris: “It’s possible that the summer bar for good screenwriting is so low now that when characters sound as literate as do the ones here, you laugh a little harder because you’re happy somebody cared to make the louts and drunks and bodysnatchers sound intelligent.”

Here’s one thing I know about today’s action movies: Two guns are almost certainly not going to be enough. Giving your movie a title like that just makes it seem like the people in it didn’t have the budget to arm themselves appropriately!

Mark Wahlberg and Denzel Washington play criminals who, at the start of the film, get arrested by Customs after having had contact with a drug lord in Mexico. Criminals getting arrested doesn’t seem like much of a premise for an action movie, so I hope you won’t be too shocked to learn that … there’s more to the story than that. (But not much.)

Wesley Morris: “Washington and Wahlberg have a good time robbing banks and blowing up buildings and barreling through military security checkpoints and double-crossing people and shooting each other because none of it really means anything.”

Between this film and CBS’s sitcom, clearly “Miller” is the former occupation turned surname of 2013. Better luck next time, “Cooper” and “Wheelwright”!

But I digress. The Millers aren’t the Millers at all: They’re led by a drug runner (Jason Sudeikis) trying to move a large quantity of product over the U.S./Mexico border, who decides the best way to avoid suspicion is to make himself look like a family man. To that end, he acquires an RV and fills it with a stripper (Jennifer Aniston), a runaway (Emma Roberts), and some other weird kid (Will Poulter). But maybe, just maybe, their journey will turn them into a kind of family after all … ?

Wesley Morris: “We’re the Millers also feels as if it began as a much darker film and was gradually lightened up by a fear of going too far. Instead, the movie’s lingering close-ups on yearning faces and heart-to-heart conversations force the fake Millers into real familial longing that’s more bogus than the family itself.”

What happens when a huge nerd realizes she’s about to start college and has had zero sexual experience? She crams, that’s what. EW, NOT LIKE THAT.

Writer Maggie Carey makes her directorial debut in the story of Brandy (Aubrey Plaza), who’s determined to remedy her sexual inexperience by performing/receiving every one of the sexual acts on a list of her own confused devising. Andy Samberg, Bill Hader, and Scott Porter are among the many dudes in her orbit.

If The Hunger Games: Catching Fire has you in a Liam Hemsworth mood ( … hey, it could happen), you’re in luck!

Here, Hemsworth plays a corporate spy sent by Gary Oldman to collect secrets on competitor Harrison Ford. Or is the HARRISON FORD GUY actually spying on GARY OLDMAN? This looks like a more self-serious, less sexy Duplicity, so just watch that instead. Or the original Hunger Games; it’s still streaming on Netflix.

So far, Joe Wright has denied us all a sequel to Hanna. But maybe just seeing Saoirse Ronan playing another junior assassin will be good enough.

Daisy and her contract-killer partner Violet (Alexis Bledel) are cutting a swath through New York when they get a new assignment to take out a man played by James Gandolfini. Something seems off, but as they hesitate in pulling off the job, they end up targeted themselves by another hitwoman.

If, like all right-thinking readers of newspapers in the ’80s and ’90s (or, if not newspapers, then the kind of comic-strip anthologies that used to make gift-buying so easy), you still miss “Calvin and Hobbes,” this documentary — which is available on demand simultaneous with its theatrical release — may be of interest to you.

The titular Mr. Watterson is Bill Watterson, the strip’s creator. And though the trailer suggests that the subject doesn’t actually appear in the film, it does seem to take a broad approach to him, featuring interviews with fans, other artists, and comic-strip experts, making it clear that even though he’s retired, Watterson still casts a long shadow.