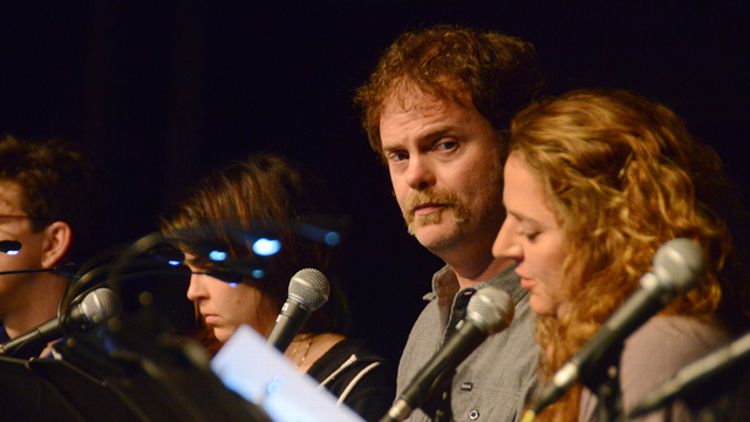 You’ve heard this before: Television has become the medium of choice for the creative class of Hollywood. When this argument is made, shows like The Sopranos, Mad Men, and Breaking Bad are cited as the evidence. This theory was tested last night at the special summer edition of Film Independent at LACMA’s Live Read series. Director Jason Reitman assembled a cast to perform a staged reading of Vince Gilligan’s Breaking Bad pilot script. Gilligan, Bryan Cranston (Walter), Aaron Paul (Jesse), Anna Gunn (Skyler), and R.J. Mitte (Walt Jr.) were all on hand, but they watched from the audience as Reitman read the stage directions and a new group of actors inhabited the world of Walter White. I empirically knew that the success of Breaking Bad resulted from a combination of the writing and performances, but last night’s Live Read made clear how much control Gilligan exerts. While the AMC show is generally grim and harrowing, this interpretation went in the opposite direction. This was Breaking Bad: The Comedy.

With the premiere of Breaking Bad‘s final season just 18 days away, I’ve been fixated on finding out how (SPOILER ALERT) Walter White ended up in that desolate diner on his 52nd birthday. That character is so distant from the Walter of the pilot, who was animated last night by The Office‘s Rainn Wilson. While it was difficult see anything but Dwight Schrute playing his version of a surly teacher who just found out he has cancer, the production was a welcome reminder of where Walt began. Gilligan wrote surprising details about the character into the script, all of which Reitman read aloud last night. As Walt cooks for the first time, Gilligan explained that Walt approached meth-making as if he were a member of The A-Team, a hero at work. We all laughed at that detail.

Later, he comes home wanting to celebrate his first cook and his first victory over his new peers in the drug trade. But as Gilligan explains in the script, the only way to commemorate the win is in bed with Skyler, because he can’t talk about it. As he abruptly turns her over, Skyler asks in shock, “Is that you?” It wasn’t funny when Anna Gunn said it in the pilot, but again we laughed when Annie Mumolo delivered the final line of the night. In the pilot Skyler is surprised; not knowing any better, the audience is surprised too. Now that the audience has witnessed the late stages of Gilligan’s much-repeated “Mr. Chips–to–Scarface” transformation, it’s difficult to watch the early Walt with the same mixture of surprise. Or sympathy, which is perhaps why we laughed so hard. Of course this is how he would celebrate a win. We didn’t know it then, but the power-hungry and violent Walt was already written into the script. It’s funny, isn’t it?

The uproarious response at the end was actually a culmination of many building laughs. Reitman went Twelfth Night with his choice for Jesse Pinkman, recruiting Mae Whitman to play the role. If you’ve seen Parenthood, you won’t be surprised to hear that she stole the show. Aaron Paul’s Jesse is complex and sad, but Mae Whitman’s was hilarious and lighthearted, a solid counterpoint to Wilson’s too-straight version of Walter Dwight. All of Jesse’s absurd dialogue sounded even sillier. This version of Jesse treated their meth business like an after-school hobby, lacking any of the authority that TV Jesse tried to exert at the outset of their partnership. Because the pilot was so Walt-centric (and Gilligan, as he has pointed out many times, initially planned to kill Jesse at the end of Season 1), we didn’t get the same insight about Pinkman from the script, but watching Mae Whitman is always a delight. Her performance was a reminder of how unique Bryan Cranston and Aaron Paul are together. The supercuts of Jesse saying “bitch” are funny, but it’s hard to think of many laugh-out-loud moments from the show. Cranston and Paul found a way to deliver some objectively hilarious material in a way that often makes you too nervous to laugh.

Before the show I wondered what it’d be like to see iconic characters whose stories are not yet finished inhabited by relative strangers. All of the previous Live Reads (including Ghostbusters and Glengarry Glen Ross) have been performances of movies — tidy packages with endings. The group of actors (more or less) who stepped in last night had the more difficult task of voicing characters who were just beginning to form on the page, but are very rich to the audience. Mumolo as Skyler helped set the comedic tone early on, playing the much-maligned wife as a joke of a nag, not an actual nag. (The rest of the cast was filled out with Ellie Kemper as Marie, Chi McBride as Hank, and Paul Rust as Walt Jr.) Since Skyler is one of the more hated characters on television (Google “Skyler White fat”; better yet, don’t), I thought it was an interesting choice, but also a complicated one. The corruption of Skyler is less linear than Walt because she’s more of a complicit partner rather than a leader, and television allows her trajectory to fall outside of the linear heroine-to-antiheroine continuum over the course of a few seasons. If Mumolo hadn’t gone funny, giving the character any personality would have been difficult since the pilot relies heavily on her non-verbal reactions to Walt, which were not a part of the written script.

Even though I was laughing the whole time, it took me many hours to realize that Reitman had intentionally cast a bunch of comedians. In retrospect, it was the smartest move because matching or even approaching the careful tone that Gilligan has cultivated would be impossible.