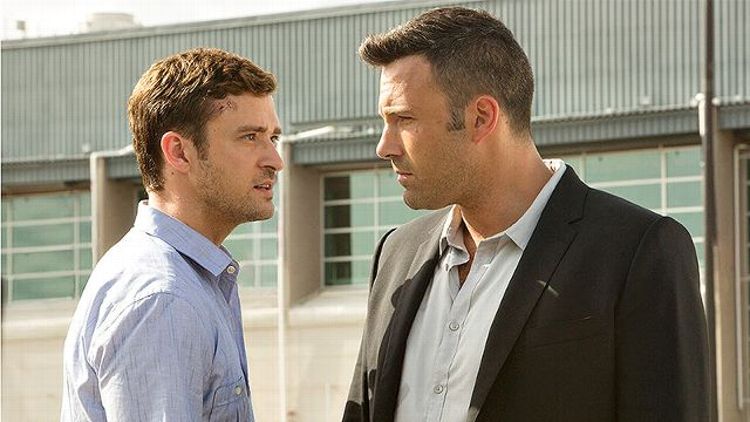 The world of online gambling is meant to be the source of the movie’s thrill. Ben Affleck is Ivan Block, the goony jawline behind a fraudulent poker operation called Midnight Black. One of its victims, a Princeton brat named Richie Furst (Justin Timberlake), wants his money back. (Get in line, Richie!) The goon backs the brat into working for him in Costa Rica. The brat needs the money. He also needs the goon not to hurt his father. But the FBI — represented by Anthony Mackie, in the hat he wore in The Adjustment Bureau — is closing in, and so are the local cops. Will Richie help catch Ivan? Will Ivan stop feeding Costa Ricans to crocodiles long enough to notice he’s being played? Is the government shutdown ever going to end?

Sorry, but I actually had that thought while this movie bored me stiff. Apparently, I’d rather be thinking about Congress than watching Justin Timberlake try to outsmart Ben Affleck. You don’t believe that someone named Ivan Block would entrust so much of his shady empire and so much of his woman (Gemma Arterton) to a guy like Richie. He’s either a genius or a fool. Affleck doesn’t choose. He makes himself sleek and slightly primitive enough to be interesting. It’s his Boiler Room performance in a linen shirt.

But for the movie to work at all, you have to believe that Ivan can’t tell that his girlfriend and Richie are lying about what they’re up to. At one point, he’s thought a few moves ahead of them, sure. But for him to wind up where the screenplay puts him ultimately means that he has to ignore how much of an amateur Timberlake seems to be and how empty of purpose Arterton is. As an actor, Timberlake is badly miscast. He makes sense in comedies. He can be physical and silly and push against the boundaries of a character. Appearing in almost every scene of a thriller — even one as nominal as this — requires cunning. And there’s nothing cunning about him. He’s not a movie star the way he’s a music star or a star on SNL.

But the blame for Runner Runner’s badness isn’t on Timberlake. He’s actually trying. The director, on the other hand? Well, Brad Furman can’t whip this movie together. He dumps Tony Scott thriller music on every scene. He gives you a million cuts. He keeps the brown people in service positions. Furman likes assholes. He also made The Lincoln Lawyer, that Matthew McConaughey courtroom sleeper hit from a couple years ago. With Runner Runner he has a similarly slick script. This is a sleazy-sexy ’80s thriller that has no idea what sleazy-sexy is — or is too scared of what it takes to go there. The movie needs to go off the rails. But it’s greedy and lazy. It only wants to go to the bank.