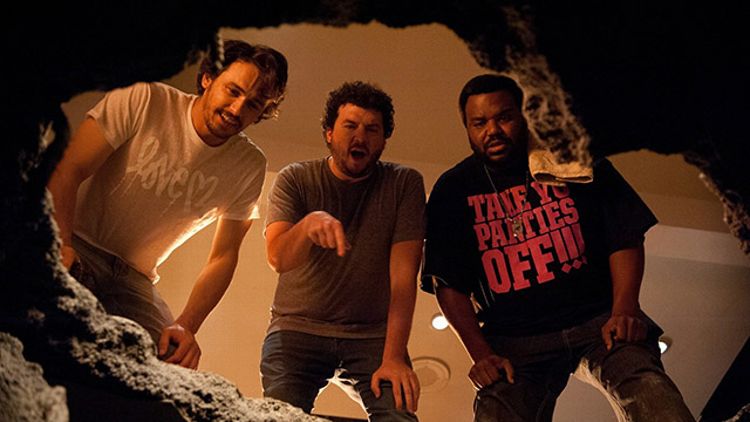 This Is the End

When This Is the End debuted, Grantland’s own Girls in Hoodies reviewed it for their podcast, with Molly Lambert drawing attention to the movie’s casual homophobia and reliance on rape jokes, both of which are present and neither of which I can defend. That said: It really made me laugh.

This Is the End finds several showbiz bros — Seth Rogen (who wrote and directed with Evan Goldberg), James Franco, Jay Baruchel, Jonah Hill, Craig Robinson, and Danny McBride, all playing “themselves” — holed up at Franco’s new mansion after the apocalypse interrupts his housewarming party. There are, of course, a series of comic/action set pieces, like the carnage the first apocalyptic disaster wreaks on Franco’s star-studded soirée, the guys’ inventory of the actually useful supplies they happen to have on hand, and a genial attempt to pass the time by shooting a trailer for a possible sequel to Pineapple Express. But the story is really about how helpless and ill-equipped these idiotic man-children are to survive the situation, and watching it, I really felt that the joke was on them, in the best way.

The film definitely expresses a narrow range of human experience, and your tolerance for the antics on display will depend greatly on your affection for the movie’s stars. And I promise that, if nothing else, it’s less self-indulgent than Ocean’s Twelve.

Wesley Morris: “The movie is obviously on drugs, but they’ve given its makers a kind of clarity. There’s wonder here that films with quadruple the effects budget would kill for.”

Are your children fans of the Ice Age movie franchise but fundamentally suspicious of anthropomorphized animals (particularly prehistoric ones)? The Croods might be right for them.

The premise is that “the world’s first family” of Neanderthals (I guess? I will confess that I’m not certain how true the film is to the archaeological record) has to find new shelter; along the way, the family’s ditzy teenage daughter (voice of Emma Stone, who really can do better) develops a crush on a slightly more evolutionarily advanced boy (voice of Ryan Reynolds, who … yeah, that’s about right).

The Muslims Are Coming!

With Islamophobia still a widespread issue in the U.S., how are progressive Muslims to challenge ordinary Americans to examine and, ideally, overcome their prejudices? Comedy!

The Muslims Are Coming! documents the comedy tour of the same name, headlined by stand-up comics Negin Farsad and Dean Obeidallah; their story is bolstered by interviews with comic luminaries including Jon Stewart, Janeane Garofalo, and David Cross.

The only explanation I can muster for the recent vogue in movies adapted from or revolving around the Beats — Howl, On the Road, Kill Your Darlings — is that everyone in the film industry is working on an English degree and just started their sophomore year.

To this boomlet, we can now add Big Sur (available on demand in advance of a theatrical run), a film adaptation of Jack Kerouac’s novel about a complicated intermingling of friendship and love.

The story of Jeremy Lin’s incredible ass-kicking streak was so ubiquitous last year that even non-sports fans (hi) couldn’t avoid it. This is a guy made to be the subject of a documentary feature — and hey, here’s one now!

Available on demand simultaneous with its theatrical release, Linsanity covers Lin’s whole biography, from childhood (when he hated taking piano lessons) through college (where he endured racist taunts from other players) and into adulthood and NBA superstardom.

Filed Under: James Franco, Linsanity, Seth Rogen, This Is the End, VOD OCD

Do Not Tell Fiona Apple to 'Get Healthy!' While She's Performing, or Ever, Really