Do Not Tell Fiona Apple to ‘Get Healthy!’ While She’s Performing, or Ever, Really 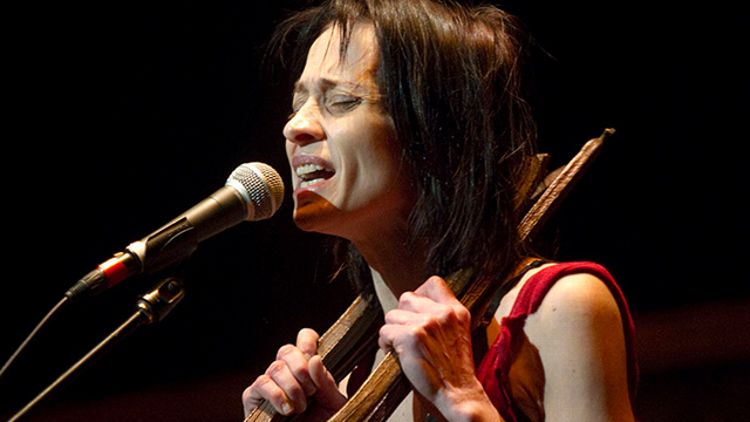 Fiona Apple kicked off a new tour Thursday, and it ended gruesomely enough to make her Texas hash bust look like a game of Candy Land. By a couple of accounts, the duration of the evening at Portland’s Newmark Theatre was sensational. “Apple, who canceled a run of dates last November to be with her dying dog, seemed giddy to be back on stage,” writes The Oregonian. “Beyond giddy, perhaps: between songs, her banter was rushed, sometimes fragmented, and peppered with profanity. … When she sang, though, it was like nothing else in the world existed for her: just the song and the microphone, a relationship she has mastered. … [Apple] made light of past blow-ups: ‘People come see me to see the crash,’ she said early on, and fell to the floor in a knowing pratfall.” Stereogum corroborates the night’s generally wonderful nature, reporting that the crowd “cheered as [Apple] bent her body into all manner of uncomfortable looking shapes, and shouted the occasional word of encouragement and love. But they otherwise they kept mum out of respect or a simple fear that they could frighten the fragile 36-year-old away at any moment.”

Then the respect/simple fear bubble burst. Close to the end of the show, a woman’s voice cut through some between-songs silence, shouting from the balcony: “Fiona! Get healthy! We want to see you in 10 years!”

Holy. Shit. Do not say that.

Do you maybe say that to a family member of yours called Fiona, after great thought, after sitting her down privately, with love and care and some tea? Maybe. But don’t say it to Fiona Apple. Does her weight trouble you? Perhaps it does. Did she bring tree bark from home to hold and deploy in a percussionary capacity on this tour? Yes, she did. And did she really promote this tour with a mildly unsettling non sequitur of a video filmed in her bathroom? Most definitely. And? And nothing; just shut it down. You didn’t buy the ticket that came with the pass to engage one-on-one with the genius-level talent onstage. Your Concerned Fan card was also revoked; you’re sitting in the balcony.

Apple didn’t say any of that, though. What she did say was: “I am healthy. Who the fuck do you think you are? I want you to get the fuck out of here. I want the house lights on so I watch you leave!” Another crowd member yelled, “You’re a has-been,” which, dude/lady, pleeeeeaaaase see previous paragraph. Have so few people really heard “Hot Knife”? FIONA WILL CUT YOU. (And/or: “Don’t call me frail. I’ll beat the hell out of you.”) But since there are multitudes who don’t understand or acknowledge this, another fucker yelled, “I saw you 20 years ago and you were beautiful!” Jesus. Apple, giving more than anyone had any right to receive, “fought back tears,” according to Stereogum’s report, then “pulled it together enough to perform an understandably intense version of ‘Waltz (Better Than Fine)’ that she sang through sobs. But the wellspring of feelings burst forth again. She raged, empathized, apologized, and departed. Show over.”

Sometime between the show’s detonation and conclusion, Apple said it was “a historically stupid night” and “I’m not going to convince someone I’m healthy.” She’s got a point there — could there be a worse use of her time? Even Stereogum’s writer, who relayed all this unfortunateness to us the morning after, called for convincing: “I, too, worried over Apple’s health when she first appeared. She looked gaunt and wild-eyed. Between songs, she would walk around uncertainly, sometimes confused. Then she would make odd moves like bending backwards over her piano bench or flopping dramatically on the stage.” Can Fiona Apple be Fiona Apple? Sorry she’s not sorry that she’s not Adele or Rihanna or whoever you’re looking for. Fiona’s been Fiona since day one. Deal with it, bitches.