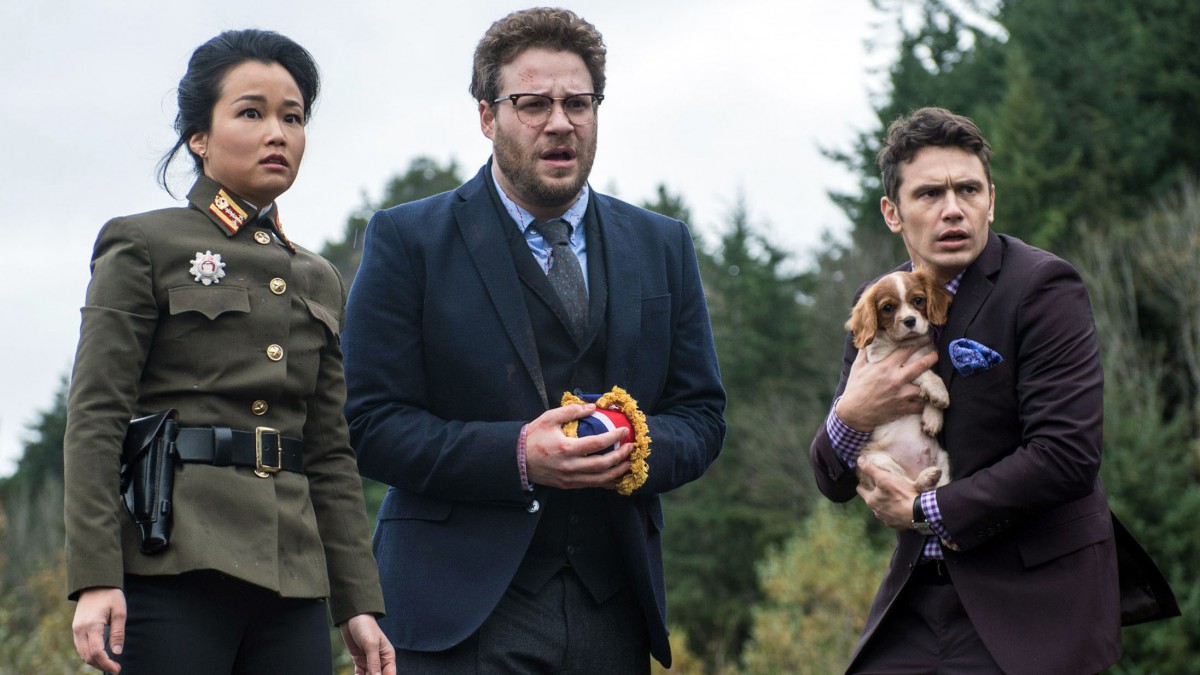 There’s a moment late in The Interview when the story about two Americans — a credibility-starved cable news producer and the himbo star of his tabloid-minded chat show — who’ve been conscripted by the CIA into assassinating the 31-year-old North Korean dictator Kim Jong-un might have lived up to the scandal it incited: the hacking into Sony Pictures Entertainment, the mass release of the company’s private documents and emails, the threat of a 9/11-type terrorism event if Sony released the film, the subsequent cancellation of its release, a public tiff between the studio and the White House, a last-minute decision to distribute the film to about 331 small movie theaters and via video-on-demand, a nation rubbernecking at a fiasco that sloshed from farce to potential tragedy back to farce.

In that moment you can almost see a worthy movie. In an internationally televised conversation, the himbo, a talk show host named Dave Skylark (James Franco), is image-bolstering Kim Jong-un with fluff questions. The plan is for him to pull a fast one and ask hard and incriminating questions. But will he? Kim and Dave are BFFs! Kim just gave Dave a puppy! Dave does it. He inquires about the country’s concentration camps and the starvation of its people. The dictator looks sheepish, then shocked. The host looks like he just came up with E = mc². It’s satisfying, watching Kim spin his wheels, Road Runner–style, above the trap door that’s just opened up beneath him. This is the cheap, moralist thrill of gotcha TV. Look at the gassy grandstanding on The Newsroom; occasionally, the gas was neon. The Interview is like the broken clock of international comedies: It’s right only twice a day.

The stakes are higher around this movie than in the movie itself. Until its gotcha moment, The Interview, a single-minded action-comedy crossing swords with satirical farce, is bad entertainment. Franco and Seth Rogen, who plays the talk show’s producer, Aaron Rapoport, are coworkers and buddies who go to Pyongyang to interview Kim (Randall Park) after Dave discovers that the show is one of Kim’s favorites. Before they depart, an American intelligence agent (Lizzy Caplan) intercepts them and explains that the government needs them to use the interview as a ruse to assassinate Kim.

Aaron and Dave accept the mission, but upon arriving at the dictator’s compound, Dave undergoes a change of heart. For he and the supreme leader are friends. They shoot hoops, do drugs, share feelings, spray each other with alcohol, and share an unpacked love of talking like black-thug stereotypes. (Every time Caplan’s Agent Lacey speaks, a tall, confused-looking black actor, playing her partner, stands somewhere in the scene; he might have two lines of dialogue.) When Kim shows Dave his tank (a gift to his grandfather from Stalin), “A Milli” plays on the soundtrack. Inside the tank, Dave comforts a chagrined Kim, who’s ashamed of his love for margaritas and Katy Perry’s “Firework” (maybe they’re gay). Meanwhile, Aaron has struck up an affair with Sook-yin Park (Diana Bang), an uptight, high-energy apparatchik who gets wind of the ruse and wants Kim, if not dead, then inexorably humiliated in front of his subjects.

Watching The Interview, the movie that came to mind more than once is another tale of two very close American buddies caught up in international intrigue — another movie mired in disrepute before it hit screens, another roving farce: Elaine May’s Ishtar, from 1987, with Warren Beatty and Dustin Hoffman. Ishtar’s notoriety upstaged what, for an hour or so, is a funny, insightful comedy about creative stagnation and American cluelessness. Can a couple of artistic failures bumble their way to success? The movie became what it was about. The question of failure gobbled it up. Similarly, The Interview takes cynicism as its subject while itself being wholly cynical about its fate and having more cynicism thrust upon it. A movie about knocking off a dictator was in effect censored, then uncensored, which had the effect of allying it with American values, with patriotism and free speech. A ticket purchased for The Interview — or download somewhere for $6 — is a vote for America (to quote the not-dissimilar Team America: World Police: “fuck yeah”).

The farce rippling around the farce hasn’t gobbled this movie up. It’s strengthened the illusion of credibility. A silly Hollywood movie has become an important independent film that has also paved a way forward for new distribution models (The Interview reportedly grossed $15 million in digital downloads over the holiday weekend). The scandal places it alongside piles of banned so-called dissident Chinese movies and Salman Rushdie’s Satanic Verses. It’s turned Rogen; his codirector, Evan Goldberg; and Franco into folk heroes. On Sunday, they live-tweeted their movie. Elaine May has yet to direct a follow-up.

There are other comedies that have thrived in the space between tasteless and righteous depiction of evil regimes: Mel Brooks’s The Producers, for instance, Barry Levinson’s Wag the Dog, Ben Stiller’s Tropic Thunder, and David O. Russell’s Three Kings, one of the few of these satires to risk making its points without the prophylactic of the entertainment industry. But The Interview is an object of politics, not a political comedy. Rogen and Goldberg, working from a script they developed with the credited writer, Dan Sterling, don’t have the chops for the latter. This movie’s CIA has no idea what it would mean to take out a dictator (and the filmmakers don’t seem to care that that assignment would resonate beyond the movie theater). It’s just supposed to be fun. What’s missing before that gotcha interview between Dave and Kim is some visual or narrative confirmation or confrontation of the regime’s cruelty and deprivation. Dave goes from following one script to following another. Rogen and Goldberg might assume we know the deal with North Korea, but the movie isn’t building to any kind of moral climax.

Instead, it doubles down on the dick jokes, gay gags, and racial pilfering that the other films they’ve either written, produced, or directed together secrete. This Is the End and Neighbors, and, to a much lesser extent, Pineapple Express, took those tropes, wrapped them in ideas, and pushed them to extremes. They were explorations of friendship and adulthood, but mostly of a genre that Rogen and Goldberg helped invent. None of that ingenuity or curiosity happens in The Interview. There’s just more cavalier almost-gay behavior (Aaron and Dave freak with joy and shock after Eminem comes out of the closet on Dave’s show) and brazen appropriation of black culture. If this is a satire of American manhood, taking it all the way to Asia seems like a waste of gas (and testosterone).

It might have seemed more subversive to bring Kim in for a bear hug than judge him, to ensnare him in the ambiguously gay glue trap of bromosexuality, mocking the poles of his masculinity by presenting him with, in Franco’s Dave, a character who doesn’t understand how masculinity even works. In other words, the bonding these two do is a form of compassion born entirely of Dave’s ignorance of North Korea’s atrocities. The movie, of course, knows, but only in the meaningless parlance of certain cable news programs where Kim Jong-un is a “modern-day Hitler.”

Really, he’s a third-generation heir of the nation’s atrocities, a de facto oppressor who also happens to seem terrifically strange. Turning him into the cartoon character he is in The Interview seems both easy, redundant, and beside the point. Mocking Kim Jong-un seems like taking North Korea’s bait. But the movie can’t risk humanizing him. Randall Park gives the cartoon everything he can, but it’s all fake: the rage, the tears, the simpering, the chomping on cigars, the chest-out bravado. It’s noxious hot air. Park had a much better-written role on HBO’s Veep, as an unflappable war vet running for president.

This part as Kim might be a more lucrative, higher-profile job. It’s thankless, though. As satire, Margaret Cho’s minuscule 30 Rock impersonations of Kim’s father, Kim Jong-il, as a doddering grandmother weren’t less problematic, just deadlier. She invented one ridiculous aspect of Kim and went to town on it. But none of the actors in The Interview knows what to do with this material. (That black CIA guy might be better off letting Caplan speak for him and everybody else speak “like” him.) Franco is especially lost. He’s loud and shticky. He has none of the unctuousness you need for the part of a cable talk-show host. The crass idiocy he’s playing is not his strong suit. He and Rogen condescend to parts that you’d like to see Beatty and Hoffman — or Matt Damon, Ben Affleck, or Michael Sheen — try, actors who can do a lot with a fool. Only Bang really goes for something even loosely novel: political and sexual revolution.

What’s wrong with The Interview is that it doesn’t know how to be the singeing comedy it wants. So it has to content itself with a chaotic action-film finale of gnawed off fingers and Kim’s melting face. This is territory better mocked, a decade ago, by Trey Parker and Matt Stone in Team America: World Police, another movie that attempted to laugh at the politics the entertainment industry proliferates. Kim Jong-il was the villain there. When it comes to North Korea, you always have the sense that the Kims are easy targets. You always have the sense that because their cruelties are so deeply local and their oddness so flamboyantly camera-ready, they’re asking for it. What are the repercussions for laughing at them?

The Interview, of course, would like to do more than laugh. It would like to lethally weaponize comedy. Not the way, say, Charles Chaplin did with The Great Dictator or the best of Sacha Baron Cohen can. It’s cruder than that. Quentin Tarantino’s Inglourious Basterds is a brilliant revenge comedy right up to the moment when it stops using comedy to draw its big bloodbath. Rogen and Goldberg have nothing that smart on their hands. Tarantino’s problem in the last act is their problem for most of the movie. They don’t trust comedy. The weapon in The Interview is a missile, and watching it sail, in slow motion, toward its moving target fails to unleash the amused catharsis of successful satire. The only target the movie hits is literal.

‘The Juliet Show’ Podcast: Chris Soules, the Next Bachelor