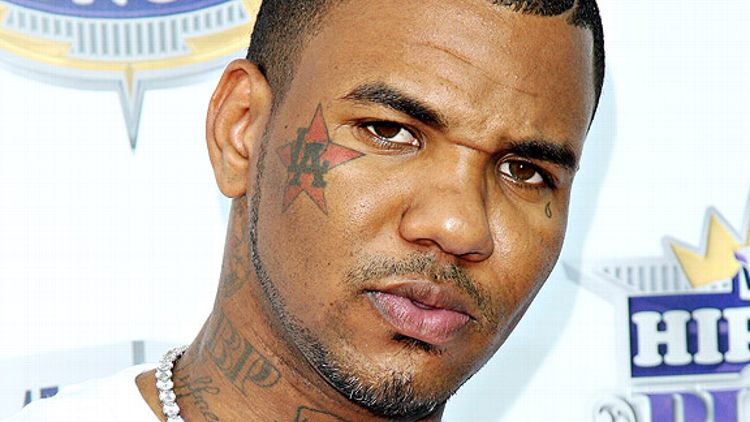 Some musicians are more comfortable being candid than others. Game — the rapper who releases his fourth album, R.E.D. Nation, this week — is one of those people. Whether it’s about his relationship with his parents, his children, his city, his record label, or Dr. Dre, Game, God bless him, likes to tell us how he’s feeling. His greatest moment of forthrightness came on the title track to 2006’s Doctor’s Advocate: There, with his voice near tears, and all while getting real nice on Belvedere and banana Snapple, Game rattled off a list of regrets spanning his entire life. It was a moment as worrying as it was awesome and, ever since, we’ve been keeping an eye on Game’s emotional state. So, on R.E.D. Nation, how’s he doing? Herewith our amateur psychological profile of Jayceon Taylor.

Excessive Anger
Patient is exhibiting familiar symptoms of rage toward his record label, Interscope. Background: following his beef with 50 Cent, Game was moved from Interscope imprint Aftermath — run by 50’s ally Dr. Dre — to Geffen, and it still hurts. On “The City,” he threatens violence, rapping, “Torn between Aftermath and Geffen/Interscope, now I got you in the scope.” On “Pot of Gold,” he makes more realistic claims, “Y’all don’t understand, I’m misunderstood / Give Interscope two more albums, then I’m done for good.” Emotions here, he admits, were exacerbated by the lukewarm reception to his last album: “Came with LAX / Since critics said it was average / I was stressed the f—out.” On “Martians Vs. Goblins” he threatens Rihanna (“Throw her in front of a f—— train”) and Lil B (“Tie [him] up to a full tank of propane”). Patient seems unstable.

Delusions of Grandeur
Our patient is prone to self-aggrandizement, even beyond the usual hip-hop braggadocio. At one one point, he declares himself one of the best five rappers of all time despite overwhelming evidence to the contrary, then claims to be metaphorically superior to Kobe Bryant (Game’ll “give you 84” — three more than Bryant’s career high). Also, at one point, he says he’s Jesus (“You test me, you test God / I’m his son”).

OCD
The patient references A&E homicide investigation show The First 48 excessively, roughly five or six times over the course of the album (“First 48, they don’t find me, case closed,” “Sleep the first 48, and wake up in the A-Town,” “I watched First 48,” etc.). Symptoms of obsessive behavior? Or is it just a really good show? Note: Investigate further.

Signs of Stability
Over the course of album, patient becomes more comfortable with accepting responsibility for his actions. At one point, he admits that he “had to leave Aftermath, Dre said I was too defiant / That was five years ago, look how fast it go / Destroyin’ Interscope, shot myself like Plaxico.” He questions his purpose in a healthy way: “Sometimes I feel like this rap shit is heaven sent / Then I get a high, feel like it’s irrelevant.” And, as always, patient is ready and willing to share: “I got some shit on my chest that I want to get off.” (As explained in an interlude, “red” is representative as “a very emotionally intense color.”) By the end of the album, following a track lovingly describing the birth of his daughter, Game has found a purpose. As friend-again Dr. Dre explains: “Taking care of your family — that’s the most gangsta shit a nigga could ever do.” Finally, Game himself, on “California Dream”: “Am I happy? Hell yeah!”