Arthur Chu, the Richard Hatch of ‘Jeopardy!’: What’s Not to Love? 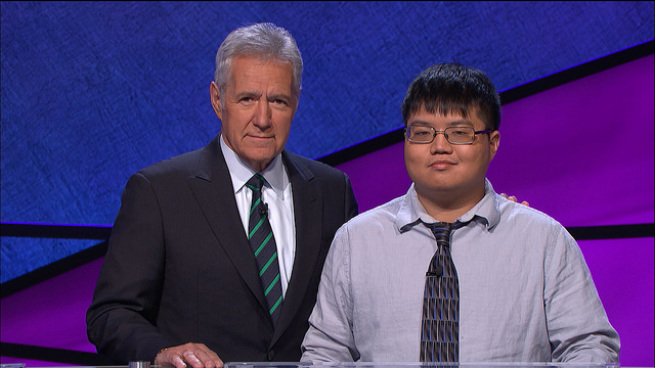 Reigning Jeopardy! champion Arthur Chu, whose four-game winning streak will be interrupted by a “Battle of the Decades” match before he returns on February 24, has won more than $100,000. He did his homework before appearing on the show, Googling for strategy tips and drilling himself on topics about which he was less informed. He “lurked” on fan boards and read up on the victories and foibles of past contestants, both real and fictional. And yet, apparently, some of you don’t like him very much.

Jeopardy! strategy is not like Survivor strategy, but it’s equally unnerving when a contestant on either show strays from what might be called good sportsmanship. Chu compared himself to Survivor’s first winner, Richard Hatch, who seemed to corrupt the game with his ruthlessness even though there was no road map in existence to revolt against. He invented the alliance, now a mainstay of Survivor gameplay, but he was calculating in a way that was morally off-putting even before we knew he didn’t like to pay taxes and had fathered 200 children. Unlike Hatch, Chu didn’t really invent anything: In an interview with Mental Floss, he cites 1985 contestant Chuck Forrest’s category-hopping (the “Forrest Bounce,” also a good name for your woodland theme park) as inspiration, noting that it was also used by IBM’s computer Watson. “Watson knew that the bottom two rows of the Jeopardy! board are more likely to contain Daily Doubles and it knew that whoever gets the most Daily Doubles is the most likely to win the game — that’s just statistical analysis. So it was programmed to hunt those Daily Doubles, and I figured I had no reason not to do that.” Yes! Why not do that? Besides the fact that it’s more of a brain strain to hop around the board willy-nilly, Chu mentions “sportsmanship” and “tradition” as being two possible reasons people pass up the opportunity. Those reasons are also why Chu has ruffled some feathers, though probably far less than headlines would lead us to believe. His strategy, he admits, is “less pleasant to watch” than the traditional format.

What is Chu’s game theory, exactly? While most players opt to stick with a single category and work through it from lowest to highest prize amounts, crossword-puzzle style, Chu begins with the most difficult clues in an effort to solve the Daily Doubles and doesn’t hesitate to lay down the big bucks when he finds them in a topic he’s familiar with. If the question belongs to one of his less-practiced knowledge categories, like sports, he’ll only wager $5 and throw it away, knowing that it’s off the board for his competitors. He also spat in the face of the $1-over wager tradition in Final Jeopardy, in which the extra dollar prevents a tie; instead, Chu intentionally bet to tie twice, though only once did he and his competitor (Carolyn Collins) both answer correctly and move on. This is not a humanitarian move, by the way, but it is a clever one (Keith Williams, former Jeopardy! winner and obvious math person, breaks it down for you in detail here): Playing to tie increases your chances of advancing both because of game theory and mind-fucking your opponent (“if your opponent knows you’re going to wager for the tie, he might disregard a rational wager and go for broke in an attempt to tie you”). Chu is also quick to buzz in, which is perhaps the most useful Jeopardy! skill of all.

Chu is an aspiring actor and comedian who relied on his “scripted play” to quell his nerves. He was in the zone, focusing on the economics of his rehearsed moves and even playing the depersonalization game to stay chill. He told Mental Floss “I was adopting this persona that I’d built up in my head. Like, a Jeopardy! champion wouldn’t freak out, a Jeopardy! champion wouldn’t hesitate. A Jeopardy! champion would grit their teeth and lean in, be super-focused and engaged, and so that’s the version of me that people are seeing on TV.” Backstage on Twitter, his refusal to apologize for actually playing to win has been interpreted as smugness, which is even more bizarre than that he’s accrued any animosity to begin with.

In March, we will have been acquainted with Jeopardy! for 50 years (fun fact: Saturday Night Live’s Don Pardo was its first announcer). One of the rare benefits of growing old is that you have more knowledge available when you pursue your ambition$, more resources from which to pull information, and more mistakes from which to learn. Chu’s gameplay didn’t stomp on anything other than an orderly looking board and convention. He worked for his earnings, and worked hard. Unlike past champion Ken Jennings, who Chu supposes was just “naturally gifted,” Chu studied and obsessed and toiled over making himself a better player. That’s not a hack, it’s effort — brainy, focused, and effective. It turns out there’s more to Jeopardy! than translating chess pieces into German, and that’s a game-changer.