The BadGalRiri Effect: Imagining the Fallout From a Rihanna–Chris Martin Affair 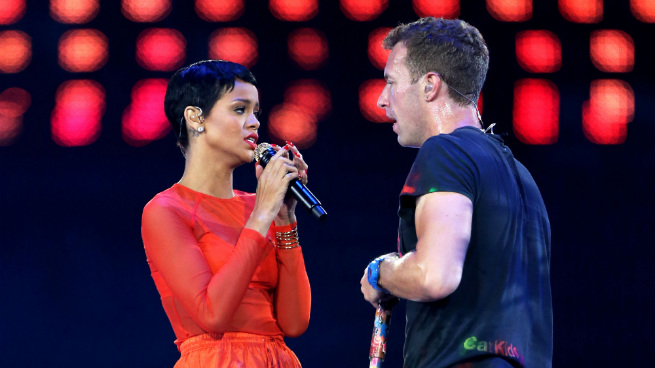 Gwyneth Paltrow was staring into the gazing pool in her Brentwood backyard, thinking positive, #blessed thoughts and telling the water she loves it very much, when a horrifying image appeared. Suddenly the water transformed into a scrying mirror, in which she could see a vision of her ex-husband Chris Martin at a fancy restaurant, having dinner with a beautiful young woman. She peers deeper into the image, trying to identify the mysterious visage of Chris’s dining companion. Recognizing the unmistakable face of Rihanna, Gwyneth screams and pounds her fists into the water, accidentally manifesting beautiful eggshell-colored bone horns out of her head. Her trusted Dr. Emoto, who has been living in the guesthouse on call, runs outside to stop Gwyneth from being violent against H20. The BadGalRiri Effect strikes again!

Now, it could be that Chris Martin and Rihanna were just talking business. It wasn’t necessarily a date, even though Chris is consciously uncoupled and Rih and her on-again, off-again love Drake recently split up once more. That doesn’t mean it was a date, even if they left the tony Santa Monica eatery Giorgio Baldi conspicuously through different exits. They were probably just talking about working on another song as a follow-up to their 2011 collaboration, “Princess of China.” Or they’re fucking. Maybe it’s both!

Gwyneth continues to cosplay her latest role as “the chillest ex-wife ever,” remaining good friends with Chris, hanging out with him around L.A., and maybe even still living together while also encouraging him to move on. But this glitch in the GOOPtrix could have far-reaching consequences. For example …

June 9, 2014: Drake burns all of his Coldplay records in a bonfire at his Calabasas estate, but Drizzy accidentally puts out the fire with a shower of his ice-cold tears, leaving him with a pile of half-melted vinyl and misty colored memories.

June 13, 2014: After “accidentally” bumping into Rihanna at the Chateau Marmont, Gwyneth tries to strike up a casual friendship with Riri by comparing her goth see-through Alexander McQueen dress from the 2002 Oscars to Rihanna’s recent crystal-studded naked dress.

July 5, 2014: Pictures surface on the Internet of Chris and Rihanna sucking face at a Malibu barbecue. The ones of Chris and Riri blazing up a spliff and then eating a whole roasted pig cause Gwyneth to finally snap, descending into a juice-cleanse, hunger-fueled rage.

July 6, 2014:  Gwyneth posts a pictures of Rihanna and Chris on her Instagram captioned, “THESE HOES AIN’T LOYAL!”

July 8, 2014: After rejoining Instagram, Rihanna posts a pic of herself tanning naked in an English garden with Chris’s hands covering her crotch, captioned, “WHAT’S IN THE BOX BITCH?”

July 9, 2014: Rihanna becomes best friends with Winona Ryder and announces they are costarring in the sequel to Shakespeare in Love.

July 12, 2014: Under the influence of boyfriend Chris Brown, Gwyneth gets into tagging and spray-paints a huge Goop logo on the front of Rihanna’s house.

July 14, 2014: In concert, Chris Brown changes the lyrics of “Loyal” to “got a white girl with some organic titties,” prompting Gwyneth to flash the goods at a Jumbotron while giving double middle fingers and screaming, “WATCH IT ALL FALL OUT!”

July 25, 2014: In the Hamptons, Rihanna takes a massive group selfie with enemies of Goop including Madonna, Angelina Jolie, Graydon Carter, Ben Affleck, Kate Moss, Martha Stewart, and Anna Wintour, captioning it “You can’t sit with us.”

August 2, 2014: Chris Brown gets back together with Karrueche Tran.

August 3, 2014: Riri and Chris tell Gwyneth they want to continue as a twosome without her. Gwyneth pretends to be super cool with everything, then goes home and gorges on bacon bits (THEY’RE VEGAN).

August 15-17, 2014: Gwyneth spends a wild weekend with Drake, which crashes and burns on Sunday night when he gets too high, puts on “Days in the East,” and opens up to her about his feelings for Rihanna. Gwyneth pretends to listen while ordering her Uber under the table and thinking to herself, My god, I’ve got to get out of Calabasas and back to Brentwood!

October 25, 2014: Gwyneth and Chris remarry, with a lavish re-commitment ceremony at David Geffen’s estate in Malibu ministered by Kanye, who has permanently changed his name to “Sir Kanye Kardashian” in an act of performance art after Marina Abramovic suggests the idea to him.

November 13, 2014: Gwyneth is caught cheating on Chris with Rihanna, when the two are discovered by paps in a Tulum love nest.

November 14, 2014: Gwyneth, Chris, and Rihanna vow never to see each other again (except for parental visitations for Gwyneth and Chris). All that remains is a memory of the Hamptons.

Hollywood Prospectus Podcast: 'Game of Thrones,' 'Fargo,' and 'Orange Is the New Black'

Ask the Maester: The History of the Wall, Invasion Strategies, and Maester Aemon