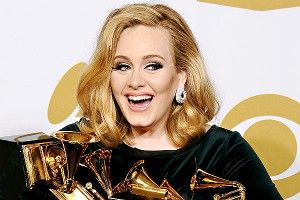 Grantland’s complete reaction to last night’s Grammy Awards is forthcoming later today, but for now, below, here’s a partial list of the winners. As you may have heard, Adele dominated, both through her widely praised performance of “Rolling in the Deep” and through her uncanny ability to mind-meld her name into basically every envelope that was opened. The other story of the night was, of course, the tributes to Whitney Houston, most notably Jennifer Hudson’s rendition of “I Will Always Love You.” But if there’s one other thing that people will be talking about, it’s Justin Vernon’s acceptance speech.

The Bon Iver front man has been talking down the importance of the Grammys for months now, and maybe really didn’t expect to win. Guess what? He did! Off-screen, Vernon took down Best Alternative Album for his self-titled latest, then got to trot up to the podium when he snatched an unlikely victory over Nicki Minaj in Best New Artist (also: Right, yeah, in what universe is he a “new” artist, etc.). Thankfully, he had a speech prepared, and managed to expertly skirt the line of jerkiness, indifference, and genuine appreciation. The important bits:

“It’s really hard to accept this award. There’s so much talent out here, on this stage, and a lot of talent that’s not here tonight. It’s also hard to accept because when I started to make songs I did it for the inherent award of making songs. I’m a little bit uncomfortable up here, but with that discomfort I also have a sense of gratitude to all the nominees, all the non-nominees, that have never been here and never will be here … “

And here is where fellow nominee J. Cole’s face did this:

Then Vernon wrapped up with ”I also wanna say thank you to all the voters. Sweet … sweet hookup. All my bandmates, old and new. The city of Eau Claire, Wisconsin … and of course most of all my parents.”

Speaking of practice nonchalance, here’s Louis C.K.’s tweeted reaction to his Best Comedy Album win: “Im cooking rice green beans, steak for the kids (gf chicken fingers too) and someone just told me i won a Grammy. well golly … Thank you to whoever decides to give those things to people. And thank you to people who buy things that i make and then laugh.”

OK, and now on to the people who won Grammys and then seemed to actually care about them! The list (via the AP):

The Walking Dead Recap: We Hear It's Pretty Nice in 'Nebraska'