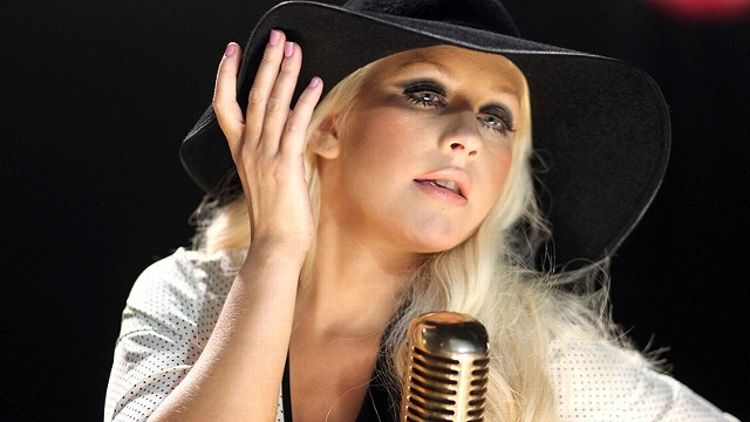 Christina Aguilera: Xtina “is still a boozing mess!” At Spago she “drank so much wine and champagne that she couldn’t even walk to her car.” Boyfriend Matt Rutler supported her on the way out to the car. “Christina loves to drink and has a problem with knowing when enough is enough. Matt has told Christina that she should slow down on the alcohol when they are at dinners, but she gets mad and tells him she’ll do what she wants.” She hates dieting and “lives off champagne and pasta. But she still believes she is healthy and doesn’t think that she needs to work out.” All she wants to do is drink her rosé!

Harrison Ford & Miley Cyrus: “Harrison Ford has taken Miley Cyrus under his wing, determined to school her in America’s past.” I would watch that movie. In fact, I wish I were watching it right now. Miley is in Philadelphia while her fiancé Liam Hemsworth shoots Paranoia with Indy. “Harrison told her that she should visit the Betsy Ross House. Miley was like, ‘Who is Betsy Ross?’ Harrison thought it was cute. Adorable though Miley’s ignorance may have been, she took his advice to check out the city’s historical highlights. She also went to the Liberty Bell and the Declaration House. She really fell in love with the city.” As well she should have: Philadelphia is awesome, and it has Tastykakes.

Ryan Seacrest: “Seacrest out … of his mind?” Ageless host demon Ryan Seacrest “has become what one insider calls “obsessive,” almost paranoid about his health. The 37-year-old host and producer has assistants tote around a chilled briefcase filled with a custom macrobiotic green drink he chugs to stay young.” And that makes him different from everyone else in Los Angeles … how? “He has also been taking human growth hormones and stem cell serum to keep his skin youthful. Ryan’s girlfriend of two years, Julianne Hough, 24, isn’t thrilled with the new regime. She loves pigging out a few times a week and sharing a bottle of wine with her boyfriend. But now all those indulgences are off.” I forgot my mantra.

Amanda Bynes’s Breakdown Continues: “How much trouble can you get into buying a cupcake? Plenty, if you’re Amanda Bynes.” In late September, “the spiraling starlet” wandered through a cupcake shop in New York “and even locked herself in the bathroom for an astonishing 30 minutes.” Maybe that is how long it takes her body to process a cupcake. An eyewitness says, “Her behavior was unlike anything I’ve ever seen. She was wearing sunglasses — at night — tiny shorts and high heels, just walking around staring at the cupcakes — for two hours.” Well, there are a lot of flavor choices nowadays! “Amanda, 26, barricaded herself in the rest room of the tiny bakery. The staff knocked on the door for ten minutes. A firefighter happened to be in the bakery and worried Amanda was in trouble. He kept yelling ‘Please give us a sign if you are conscious’ but no one was responding so he called the police and threw himself against the door to get in. But before New York’s Bravest could bust down the door, a nonplussed Amanda sauntered out. She said very calmly, ‘Oh, excuse me — I was doing my makeup’ and left.” Ugh, poor Amanda.

Jude Law’s Midlife Crisis: “Jude Law was once considered Hollywood’s hottest bachelor, but lately he’s looking more like an unpaid extra.” YA BURNT, JUDE LAW! “Friends of the formerly hunky British actor have noticed him growing increasingly unhappy and disheveled as he struggles with a midlife crisis. He doesn’t know what to do to make himself feel better.” His latest film, 360, bombed. “He’s staying up late, drinking, smoking, and eating junk food. It’s all driving him deeper into depression. Another problem is his fading sex appeal: The studios think his movies are flopping because he doesn’t have the pretty-boy sex appeal he used to. Jude was never concerned with being handsome. But now that he’s starting to age, he’s realizing he was actually very dependent on his looks. Jude’s greatest vice has always been women, but they are not falling into his lap the way they used to.” What’s it all about, Alfie?

Misc/Etc: “No, that’s not a giant burrito” “high-fives from Fergie” “which would make the fresh-faced actress 29 or (gulp!) 30” “Candy is supposed to end up in your tummy, not your vacuum!” “Backstreet’s back with double coupons!” “Clearly, she used to be a model!” “She has perfect cleavage” “the girls she showed off on the big night were working just fine” “struggling celebs often ‘lose’ their sex tapes” “Word is you’ve got mad stamina” “already adopted the old actors’ attitude that exact age should be a closely guarded secret.” “It’s sad when your clothing is as messy as your personal life” “We apologize to Mr. Cage” “That bod is a national treasure, Johnny, so please take care of it” “If he’s not hanging the bong, he’s trying to bang the models” “Kim will only cuddle Mercy for the cameras”

Melissa Etheridge: “I am very good at thumb wrestling.” I bet you are, Melissa. Oh, and also, “Brandon Lee wanted to be my boyfriend. He couldn’t believe it wasn’t possible.” One more: “I can shake my eyeballs fast.” Ahhhhh!

Tina Fey: “I would like to state for the record that I beat Jon Hamm in Words With Friends yesterday.”

Kate Upton: “The body part I like to accentuate? I’d say my eyes.” Girl, you know that’s a lie.

Anne Hathaway & Adam Shulman’s Wedding: “The whole thing was very romantic.” The ceremony sounds really similar to Natalie Portman’s, which also took place under a traditional Jewish chuppah on a cliff in Big Sur. Hathaway’s wedding involved an “off-the-shoulder silk tulle gown with embroidered satin flowers and pink-shaded train” made for her by Valentino. She wore a “1920s-style headband” over her pixie-cut hair. “Thoughtful touches included fuzzy blankets and shawls,” and “white balloons, lit so that they glowed,” hung “in the sky over a nearby barn.” A breeze blew Hathaway’s train all around, but she just “started laughing.” Sounds like a regular expensive-ass big celebrity white wedding, but hey, at least it wasn’t at a plantation!

Taylor Swift: “It’s not that I’m this egomaniac and I don’t want to hear anything negative. But I’ve never developed a thick skin.” Only thick bangs.

Jenny McCarthy: “I wanted to be a nun for a one-way ticket to heaven. But nuns can’t have babies, so I checked out!”

Misc/Etc: “She was no fluff piece!” “When you wear magic hair, like I do” “glamorous yet youthful” “She is a goddess in my metallic shimmering sheath!” “in your pocket you’ll find a bag of Cheerios” “It’s not the devil!” “Zach Galifianakis used his lungs” “I was dating a lot of guys and it’s slim pickings” “They love singing together. It brings them even closer!” “We took the goalie out of the net and said ‘let’s see what happens!'” “They’re very passionate, very tactile” “continue their fauxmance for fame and money” “waiting to get cake smashed in my face” “It was wickedly magical” “He’s all boy, all the time!” “Plus one very understanding wife” “It’s a sleazy mishmash” “Dr. Drew Pinsky and Heidi Fleiss”

Britney Spears & Jason Trawick: He’s been spotted out in Hollywood going to clubs with his guy friends, very much sans Britney. “Six attractive women in skimpy outfits were at the table next to them. Jason kept looking over at them.” His role as Britney’s co-conservator has fractured their relationship. “Britney wants to be home with her kids. Jason always wants to go out to clubs and restaurants.” There are rumors that Jason has bought a “bachelor pad in Hollywood.” Spears has been spotted without her ring. “Sadly the ‘Piece of Me’ singer may be starting to realize the piece of her Jason wants isn’t her heart.”

Leonardo DiCaprio’s Girlfriend Makes Him Diet: “To date a Victoria’s Secret model, you’ve got to look the part — or at least that’s what Erin Heatherton told Leonardo DiCaprio!” DiCaprio has been looking exactly like Jack Nicholson lately in the candids from the Martin Scorsese movie he’s currently shooting, The Wolf of Wall Street. “The actor, 37, recently shed 20 pounds” with classes at SoulCycle (LOL), bike rides, and walking. “In the past the actor would crash diet before a movie and then gain it all back afterward, but Erin’s changed all that.”

Misc/Etc: “I entered the Matrix” “O, get happy!” “She’s in love and has the perfect family” “racy photos of the pair went viral” “with their koala purses in tow” “Botox right in the middle of my eyebrows” “They barely want to be around each other unless they have to” “It’s her worst nightmare to fail twice” “They’ve all gotten plastic surgery” “He’s the guy next door whose jewelry design business is just getting off the ground” “amongst majestic sequoia trees” “low-key and rustic, yet very elegant” “her flashy, untrustworthy ex” “all the things you want a partner to be” “just be a quarterback and not focus on anything else” “I always wished I was her!”

Kristen Stewart & Robert Pattinson & Rupert Sanders: “Kristen is saying all the right things to Rob, but she’s not being totally honest with him. Rob made her promise to stop talking to Rupert, and she’s broken that promise already. Kristen has been secretly texting Rupert. Kristen justifies it because technically she’s not actually talking to him, so she feels like she’s still keeping her word. But there’s no doubt Rob won’t see it that way. Kristen swears she’s only keeping in touch with Rupert because she feels sorry for him.” Maybe she’s trying to text someone “R U up?” but it accidentally gets sent to Rupert. “It’s not that she wants to start seeing Rupert again, but she does still value his friendship, and more than anything she feels bad for him. She regrets ever hooking up with him because the relationship was actually more of a friendship than anything else, and now she’s forbidden from even being his friend.” Well, I mean, duh, Kristen Stewart.

Kanye West & Kim Kardashian: “He told her she needs to chill out or he’s going to bounce.” MAYBE SHE SHOULD.

Misc/Etc: “giant old Chilean mesquite tree” “chats on a bejeweled cell phone” “a registered psychological support dog” “Could Bill Murray and Justin Timberlake be rehearsing a scene for a much-anticipated Caddyshack 3?” “a cyber criminal” “It’s okay, but let’s be honest, it’s kind of weird” “finally you can tweet naked pictures and no one will care” “It’s kind of ironic that I went to Hawaii to look for someone and then I found someone who’s from Hawaii” “she lost her good girl image and her innocence” “her manager wrote it off as a teachable moment” “She really took it as a sign that she’s the prettiest and most interesting out of all the girls”