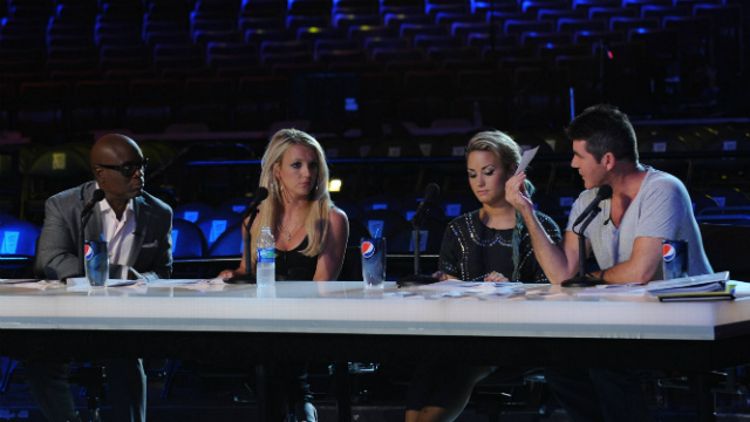 For reasons still not entirely clear to them, Grantland editors Jay Caspian Kang, Mark Lisanti, and Emily Yoshida have decided to track the second season of The X Factor. Abandon all hope, ye who mistakenly inter-navigate to here.

The X Factor began its Thunderdome stage last night. 120 tweens, olds, and groups converged in Miami to see which 24 would make the semifinals. Britney made like 15 weird faces in the first three minutes, L.A. Reid brought back the “totally inappropriately timed head shake,” Demi put that great sea foam ponytail into a French Braid, and for the first time on the show, we actually saw some decent competition!

So, because we have been so down on The X Factor and because Emily apparently wants to get credentialed to go hang out with the contestants, we will lighten up the mood. We won’t even splice in Presidential Debate jokes.

Girls: Diamond White and the Great Whitney-Off of 2012

Kang: I’m not amending my “Don’t ever go Whitney, especially Bodyguard Whitney unless it’s absolutely, absolutely necessary. But damn if Diamond White didn’t eke out a credible version of “I Have Nothing”!

I can’t remember if I’ve written this before — seriously, Yoshanti, in 2015, we should all compile everything we’ve written about singing competitions and see if we can fulfill the Thousand Monkeys Typing on a Thousand Typewriters rule. We can split the advance 50 percent (Kang), 25 percent (Lisanti), 25 percent (Yoshida). Here’s the opening line: “Simon sucked in Miami while ‘Hallelujah’ played. Everyone committed suicide” — but here’s my Whitney rule: “Never go Whitney unless you have to go Whitney, because even if you bang out Whitney (unlikely), you’ve got nowhere to go after Whitney unless you can really get to a fucked-up place with a Celine power ballad.”

This goes double if you’re going to go for THE BIG SONG. Last night, both Paige Thomas and that thin-lipped girl who looks like Audrina Patridge had a baby with Lion-O from Thundercats went after THE BIG SONG. Both failed. Paige curdled my cat’s milk. Lion-O Patridge, well … she wasn’t bad, was she?

This is a problem for Paige, who might be the most photogenic person on a singing competition ever. (Cue Lisanti cuing up Megan Joy Corkey YouTube videos and sending and deleting e-mails to uncorkmyjoy@earthlink.net.)

Lisanti: There’s nothing more fun than making insane predictions way too early in the competition, but who are you going to choose to win it all at this point besides Diamond White? She’s got the name (built-in branding), she looks like a young Whitney, and she sings like a young Whitney who could stand a year or two of vocal coaching. (Maybe when Tara Simon finally snaps and tries to sing a 25-minute rendition of “Barracuda” while splayed out on the judges’ table, dousing herself with cups of Pepsi and pawing at Simon’s V-neck, the producers will put her on retainer for our sparkling little Diamond.) (See how easy it was to go there? BRANDING.) Please, Nigel Lythgoe in Heaven, don’t let our precious Diamond become Whitney. Does Bobby Brown have any sons we have to Looper out of existence? Maybe just to be safe, we hop in the time machine, travel back to 1997, and shoot off Bobby’s penis with a blunderbuss. You know what? Maybe make it ’83, we solve a whole bunch of problems, and next week we turn on the show and discover Whitney is now magically a judge.

Now that we’ve saved Diamond from certain ruin and fixed the present/future, this would be a good time to show the Great Whitney-Off:

I’ll say this about CeCe Frey: Her gluing-feline-themed-shit-to-her-temples game is ridiculous. Where the rest of the world walks into the Hot Topic, sees the untouched rack of Cheetah Face™ decals and keeps walking over to the display of scented Belieber candles to buy a five-pack of Vanilla Swagger, CeCe finds an entire identity.

And I will also say this about Paige Thomas: I liked her version better. Go ahead, shoot me. No, really. Then I’d never have to hear THE BIG SONG again. Fine, just fire the gun close enough to my ears to permanently deafen me. I can work with you on this.

Yoshida: Obviously, THE BIG SONG is THE BIG SONG because it takes a whole lot of nuance and technical skill to make the listener forget that they’re just being shouted at for three minutes. (I’d kind of love someone to take the much more subdued Dolly version of it; that would honestly be a more gutsy move in this, the Bronze Age of singing competitions.) Maybe it was my distaste for the Cheetah Girl to begin with, but I got a lot more of the shouting vibe from her. Paige didn’t quite nail it, but at least there was something gentle and genuine about her performance.

And Diamond White? I’m sorry, guys, I’ve finally gotten to the dark, inhuman place where I’m comfortable just out and out saying that I don’t think she’s very good. I think she will be in three years — she’ll also shed some of that pre-teen nervy gawkiness — but her boot camp performance paled next to Jessica Espinoza, who was the most undeserved cut of the night.

Kang: … You guys, please take this. I’m going to go back to pulling my cuticles out of my hand with a pair of pliers.

Yoshida: Nope. He’s gone. Speaking of him now would only give his ghost more power.

Lisanti: I definitely didn’t just go check his YouTube channel to see if he’s posted a video of himself twirling sadly in the middle of his bedroom, oblivious to his mother’s cries that his Kraft Cheese and Macaroni is getting cold downstairs, honey, you have to eat sometime, there’s always still AGT, they’ll appreciate all of your gifts there.

Kang: I know I hated on him before, but Willie Jones really won me over this week. First, he’s totally punking Iman Shumpert in the high-top fade competition. Second, he’s not a terrible singer. Third, he’s totally unbelievably likable. How could anyone dislike this guy? He’s like [REDACTED OBAMA JOKE].

Yoshida: I’m not entertained by Willie Jones so much as I am entertained by Britney’s fierce, inarticulable dislike for Willie Jones. Would love to see these two in a Louisiana-set, Odd Couple–style three-camera sitcom. It would be an easy check for Britney; while Willie basically carries the show all by his charming self, becomes an international sensation, inspires innumerable personal grooming trends, and single-handedly brings back the bolo tie, all she would have to do would be to sit and wince and occasionally look at the camera and croak out her single catchphrase, “I didn’t like it,” to the sound of riotous canned laughter. If Britney were worried about hanging on to relevancy after The X Factor train eventually crashes and burns, I think she’d better hop onto Willie’s denim coattails while she still has a chance.

Lisanti: What I want more than anything in life at this exact moment is a segment of Willie Jones and Paige Thomas touching up each other’s heads with some Wahl clippers.

Lisanti: I’m still convinced he went in the wrong door for The Voice auditions, and here we are.

Yoshida: He’s one of the few contestants I have not yet looked up on any social media platforms, but I imagine his Twitter bio simply reads “a self-styled gangster Josh Krajcik.” Given that I’m probably one of five people who would be intrigued by such a combination, and I am not at all, I’m not sure how much time this guy has.

Hey xfactor, stop making them look like the﻿ douchebags you want them to be.
—YouTube user xoxogravityxoxo

Oh, xoxogravityxoxo. Someday, when you’re all grown up and have a Ph.D. in Bro Psychology, you’ll realize that The X Factor doesn’t want Emblem3 to be douchebags, Emblem3 want Emblem3 to be douchebags — they just don’t realize that the actual term for what they want to be is, in fact, “douchebags.” Which means that right now they’re about as pure a representation of reality-show assholery as can exist. But even as you read these words, Keaton, Wesley, and Drew are processing their own image on the television, the synapses are slowly firing in their kush-baked skulls, and they’re realizing that whatever they were doing before, whatever came naturally to them (i.e., employing a “gay” lisp whilst throwing shade at the other boy bands), is getting them more camera time. By the time we inevitably see them at the live shows, the circle of self-awareness will be complete, so we should appreciate this fleeting moment of innocence while it lasts. Stay gold, you fiercely heterosexual sun-kissed demigods.

Kang: I love them. They’re quote machines — “I see these dudes saying, ‘I wanna be a star.’ Dude be a musician.” And so many more, including the obligatory Huntington Beach bro shirtless shot by the pier and the hard-core version of the Goo Goo Dolls song from City of Angels.

And finally, Simon! A stroke of genius. The only way to fuck with bros with endless confidence is to take them away from their support group. It will take about three seconds before King Bro ditches his now useless bros to hang out on Demi’s skyyyyscraaaaaaaaper.

Lisanti: This is exactly like that time in 1961 when David Little-Brodington, the host/mastermind of the BBC’s Let’s Have a Quick Look at Britain’s Most Promising Young Fellows, Shall We?, suggested that John Lennon might be better off “going it alone.” Lennon, of course, took his advice, and went on to a decent enough solo career. But imagine how great he and his talented but untested boy band might have been had they decided to ignore the svengali’s advice and continued to grow together. We may have witnessed the same kind of history last night. Let’s just hope The One In The Hat stays loyal and doesn’t deprive the world of something truly special. We can’t abort The Beatles twice.

Lisanti: I feel like Britney is telling me, “Oh, you don’t like how my first season is going, and so you keep throwing out all these alternate versions of reality you might prefer to this one? Poor you.” She can say so much with a look. She’s lived a life.

Rap Genius Gets a $15 Million Investment, Wants to Create 'The Internet Talmud'; Here’s Who’s Mad About It