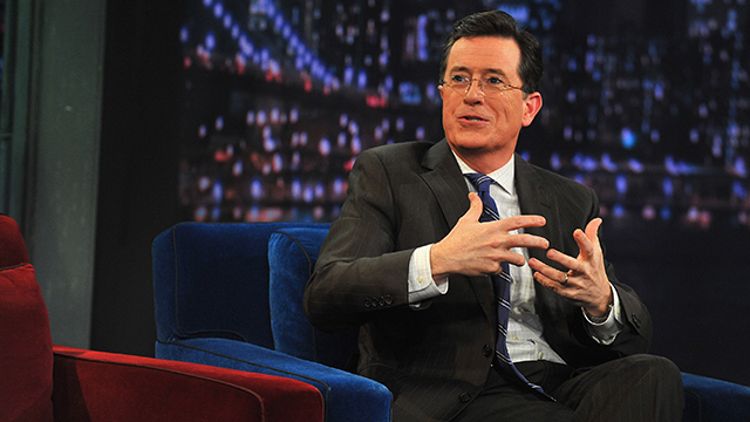 And the timeless saga of Stephen Colbert vs. Daft Punk rolls on! This all started just about a week ago, when Colbert revealed on air that the famously reclusive French duo had canceled their scheduled appearance on his show because they’d promised an exclusive secret appearance on MTV’s VMAs (going down later this month). Colbert, clearly pissed off about the last-minute dereliction of duty, took it more or less in stride, subbing the robots out for Robin Thicke and a star-studded dance party to “Get Lucky.” And lo, all the people of Earth (and even some of the people on Elysium) rejoiced! Then, just about by the next day, the tenor of the conversation took a slight turn toward aggravation. Again, Colbert addressed the no-show on his program, but this time to directly knock Pitchfork’s (and other publications’) speculations that, seeing as Comedy Central and MTV are actually both owned by Viacom, the whole thing might have been a promo gag for the VMAs.

Sayeth Colbert: “Well I’ve got one thing to say to Pitchfork: Busted! Ya got me! They’re good. These guys are good. We thought we’d tricked you by flying in the disco decepticons from Paris in a sophisticated pantomine to fool everyone, even myself, so committed was I that Daft Punk was coming, all just to help someone else’s show on another network a month from now. But we can’t put one past you, Pitchfork. Oh, what a load off, the guilt was killing me. And now that I’ve come clean, I can just do what I love … promote the VMAs.”

And then the latest: On Monday, on Paul Mecurio’s podcast, and possibly in hopes of putting the whole thing to bed for good, Colbert shared the details of the rigmarole. Turns out, Colbert and the writers were trying to put this together for a month, and were knocking around ideas to play off Daft Punk’s eternal silence. THR has the pertinent details:

[Colbert] originally intended to perform a six-minute monologue while Daft Punk nodded alongside him and he tried to enlist their manager for a speaking appearance, while also riffing on the fact that they refused to perform.

As part of the gag, Colbert also had an idea to create a star-studded video of various entertainers rocking out to the group’s “Get Lucky” in an effort to goad the duo into performing. While the video ultimately made it to air, the context changed. Interestingly, said video was nearly cut, as Daft Punk is said to have been “uncomfortable” with the gag and requested that Colbert and his writers try again. “It’s playing too much on the idea that they’re not performing as opposed to the joy of them being there.”

So, in conclusion: No, Colbert wasn’t faking. Yes, it’s hard to get Daft Punk to do so much as nod at you. And, yes, we’ll probably find a way to still be talking about this a week from now. And now you know how your late-night fake-news comedy sausage gets made.