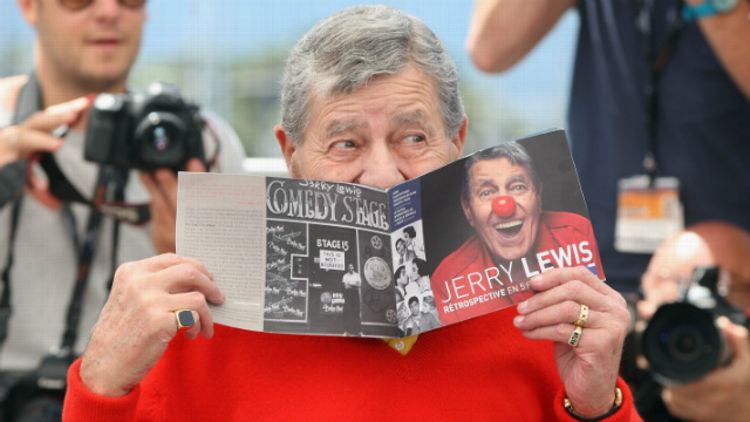 At the end of last week, a Flemish-language website unearthed and posted some previously unseen behind-the-scenes footage from one of the most infamous suppressed films of all time. The movie is The Day the Clown Cried, a completed-in-1973 comedy-drama directed by and starring Jerry Lewis as a German circus performer who entertains the children of Auschwitz during World War II.

Yes, that Jerry Lewis, and yes, that Auschwitz. The Day the Clown Cried is reportedly a very, very bad movie, undone by the fundamental incompatibility of its subject matter and the persona of its director/star, who wanted to make a serious tragicomedy about genocide but could not resist changing the protagonist’s name from “Karl Schmidt” to “Helmut Doork.” Lewis apparently agrees. He’s never allowed Clown to be released or publicly exhibited, not even in France. And at a live Q&A in Los Angeles earlier this year he admitted he was “embarrassed” by the finished product. “I was ashamed of the work,” he said, “and I was grateful that I had the power to contain it all, and never let anybody see it. It was bad, bad, bad … It’ll never be seen.”

This is as good-sportish as Lewis can really be about Clown. When you’ve made a bad movie, you can admit to its badness and possibly participate in its re-estimation as kitsch. You can take your lumps and accept your Razzie in person and demonstrate an ability to laugh at your own mistakes. That avenue’s not really open to people who’ve made a bad film about one of modern history’s most horrific mass murders, one that ends (as scripted) with the sound of children’s laughter echoing off the walls of a gas chamber. Lewis can’t go on a podcast and explain that, because no explanation would be satisfactory. It is not a good look to be in on the joke when the joke is you accidentally trivializing the Holocaust.

“[Lewis] reportedly keeps [a copy of the rough cut] in his office,” Bruce Handy wrote in a 1992 Spy article about the film, “protected from harm and unclassiness by a Louis Vuitton briefcase.” Handy also quotes journalist Lynn Hirschberg (who says Lewis screened parts of the film for her during a Rolling Stone interview years ago, and turned cold when she admitted she hadn’t enjoyed it) and Simpsons voice actor and This Is Spinal Tap star Harry Shearer, whose account of his experience is the stuff that cults are made of:

With most of these kinds of things, you find that the anticipation, or the concept, is better than the thing itself. But seeing this film was really awe-inspiring, in that you are rarely in the presence of a perfect object. This was a perfect object. This movie is so drastically wrong, its pathos and its comedy are so wildly misplaced, that you could not, in your fantasy of what it might be like, improve on what it really is. ‘Oh, my God!‘ — that’s all you can say. …

The closest I can come to describing the effect is if you flew down to Tijuana and suddenly saw a painting on black velvet of Auschwitz. You’d just think, My God, wait a minute! It’s not funny, and it’s not good, and somebody’s trying so hard in the wrong way to convey this strongly held feeling.

Although the movie remained virtually unseeable, the script was easy to obtain via mail order. By the late ’90s, comic Patton Oswalt was hosting staged readings of Clown at clubs in Los Angeles and New York, with Mr. Show’s Jay Johnston as the clown and future stars like David Cross, Will Arnett, Stephen Colbert, and Jack McBrayer in supporting roles. (According to a message board, at one of these performances, Fred Willard played a death camp commandant and delivered all his lines in the voice of Begbie from Trainspotting.)

In 1997, the movie’s producer, Michael Barclay, showed up to a Clown event in L.A. with a cease-and-desist order; that same year, the Italian comic actor Roberto Benigni wrote, directed, and starred in the Academy Award–winning Life Is Beautiful, a tragicomedy about a father and son who laugh their way through life in a concentration camp. “I hate to say this about another comedian,” Shearer told Spin’s Bowman Hastie in 2001, “but Jerry’s timing was off.”

How bad could it be? The new Clown footage (embedded below; it made its way to YouTube over the weekend, and is still there at this writing) doesn’t really answer that question. Aside from a few shots of Lewis mugging in clown makeup (straining to light a cigarette with a trick candle, etc.), we see nothing from the actual film. It’s mostly Lewis — who was in the throes of a 13-year addiction to the prescription painkiller Percodan at the time, and looks haggard — playing the role of serious, dedicated auteur.

Here’s Lewis consulting his painstakingly annotated copy of the script, operating a reel-to-reel tape machine, and carefully applying his own clown makeup in the mirror! Here are Lewis’s good friends Serge Gainsbourg and Jane Birkin — who despite rumors to the contrary probably did not act in the film — smiling as if they aren’t watching one of movie history’s greatest train wrecks in progress! Only the Flemish narration (helpfully translated by a YouTube commenter) under a montage of Lewis attempting to juggle four balls at once hints at discord: “A funny moment can be very cumbersome to produce. Things will go wrong shortly, and you can hear that Jerry isn’t happy about this.”