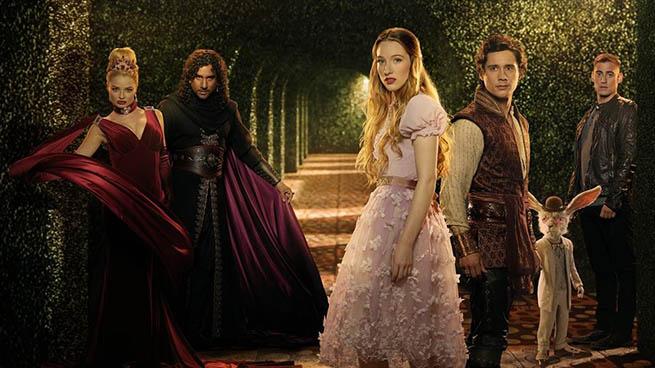 Is Once Upon a Time plenty of storybook-based TV fantasy for you and yours? Good, because Once Upon a Time in Wonderland isn’t coming back for a second season. “The series, starring Sophie Lowe as Alice, was always designed to be one-self contained season, but if it proved successful, producers were open to a potential Season 2,” TV Guide reports. If you’ve been meaning to check out the spinoff since it premiered in October, you’ve got a week to watch the first 12 episodes and then live-tweet the finale on Thursday with the rest of the sad Wonderland-ers.

Girls won’t be allowed to film at the University of Iowa.

Looking to earn $125 and live reasonably close to Toronto? Someone will pay you to follow Mayor Rob Ford around while playing tuba for eight hours. It’s based on a Family Guy gag. Tuba proficiency not necessarily required. [via]

Maybe some of you caught this, but I can’t live through the weekend without ensuring you did. Taco Bell hired people named Ronald McDonald to endorse its new breakfast menu.

Seth Rogen interviews Hannibal Buress, and Mindy Kaling and Mike Schur do a banter-licious interview together at a press luncheon.

Richard Linklater’s Boyhood — the one he spent 12 years filming — is coming July 11.

Shia LaBeouf continues his campaign of not-famousness by exiting Barry Levinson’s Rock the Kasbah. You don’t ditch Bill Murray, Danny McBride, Bruce Willis, and Kate Hudson unless you ARE famous, though, right?

From the Why Not? Department: Allow composer/Arcade Fire colleague Owen Pallett to explain the popularity of “Get Lucky” using music theory.

House of Cards might find itself in a pretty serious dispute with Maryland if the series follows through on a threat to film elsewhere.

If you heard anything about a free streaming service from Amazon, you can ignore it, apparently.

And Peter Dinklage is doing Pixels, an Adam Sandler/Kevin James joint — hold on, though! — based on Patrick Jean’s amazing short film (embedded below) from a couple years ago. “The movie follows a group of videogame experts who are recruited by the government to help deal with the threat.”