Songs of the Week: Oscars Edition! 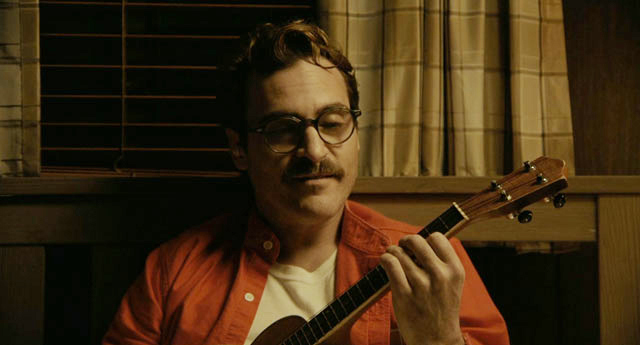 When the Oscar nominations were first announced, arguably the biggest surprise was the inclusion of “Alone Yet Not Alone” — the theme to the obscure faith-based movie of the same name (it played in nine theaters over one week) — in the Best Original Song category. The dream was short-lived: When the Academy discovered the composer of “Alone Yet Not Alone” had attempted some technically outlawed campaigning tactics to possibly game the system, the song got booted on home. Which means we only have four nominees this year (all of whom will be performing at this Sunday’s Oscars), led off here by Mr. Pharrell Williams himself.

“Happy” is also the anchor to G I R L, only Pharrell’s second solo album, coincidentally dropping just after the Academy Awards. Speaking to GQ about why, despite his manifold pop success, he’s never fully figured out the solo lane, Pharrell takes us back to 2006’s In My Mind, his first crack at it: “Talking about the money I was making and the by-products of living that lifestyle. What was good about that? What’d you get out of it? There was no purpose. I was so under the wrong impression at that time … The money was too loud. The success was too much. The girls were too beautiful. The jewelry was too shiny. The cars were too fast. The houses were too big. It’s like not knowing how to swim and being thrown in the ocean for the first time. Everything is just too crazy. You’re like, flailing and kicking and whatever, and you know what happens, don’t you? You sink.”

Anyway, prediction time: Pharrell and his new batch of good vibes takes home the Oscar, watches G I R L pop big, and continues to bloom into the biggest star the world has seen since NYPD Blue–era David Caruso.

You might not know this song, but the youth does: Disney’s runaway animated smash has been fueled, in large part, by its throwback heart-stirring soundtrack. “Let It Go,” the big number, will be belted out by Broadway champ Idina Menzel on Sunday. Go ahead and learn the words now so that the 9-year-olds at your Oscar party won’t think you’re super lame. (Impressing 9-year-olds at parties: always a very important thing to do?)

“The Moon Song,” Her

Karen O at the Oscars! Whoo! Now I know “The Moon Song” is quite tender, and I certainly don’t wanna force anything, but there was a time when the Yeah Yeah Yeahs were quite the rambunctious types (from a 2003 New York Times interview: Q: “Your performances, which are wildly theatrical, are becoming legendary” A: “It’s a cliché, but I’m supershy. I get nervous before we go on stage. For a while, I’d drink tequila. If I put even a drop of tequila on my tongue, I want to karate-chop boards.”) And so if Karen just so happens to feel like channeling the good ol’ days, it seems like the big glitzy Academy Award stage would be the place to do it.

If U2 wins this category (as it did at the Golden Globes), you know what we’re getting, right? We’re getting a Sanctimonious Bono Speech about freedom and stuff! Get psyched.

And that’s it! We’re out of nominees. Now, on to some hoi polloi.

As EW explains, “Perhaps the most enraging element of this year’s Best Original Song category is that one of the most important songs in any film this year … was not even eligible for a nomination because it incorporated too many elements from older folks songs (though when you hear T. Bone Burnett talk about its construction, it’s clearly an original work).” Why “important,” you wonder? Go ahead and jog my memory if I’ve forgotten, but I can’t seem to recall any other song this year featuring our future Darth Vader dramatically enunciating the words “OUTER SPACE.”

“Young and Beautiful,” The Great Gatsby

Speaking of snubs: Lana Del Rey’s contribution to The Great Gatsby was short-listed for the category, and even seemed like a favorite going into the nominations. And, then: bubkes. Now, go ahead: Listen to “Young and Beautiful” and imagine a world where LDR received not only the nomination she so richly deserved, but the actual statuette as well. Yes: Imagine a world where Lana Del Rey is an Oscar winner. Imagine … a better world than this.

As far as American Hustle’s many manic music moments go, it’s tough to pick between this and Jeremy and Christian drunkenly dueting on “Delilah.” But when it came down to it, J-Law’s psycho cleaning/crooning face just had to take the cake. (Also: The “Delilah” footage from the movie wasn’t on YouTube.) P.S: David O. Russell says he’s not against turning this all into a musical.

Whoa, Tom Cruise, what are you doing here? Look: Say what you will about TC’s recent dabbling in not-fully-baked sci-fi post-apocalyptic-ism. Just don’t deny that — between M83’s “Oblivion” and that “This Is Not the End” song from the Edge of Tomorrow trailer — it has gifted us some pretty solid European electropop.

Ah, can’t make it all the way through an Oscar Songs list without nodding back to the strangest moment in Elliott Smith history — and a pretty fantastically strange moment in Oscars history, too. Bet you forgot all about how Smith’s sweet rendition of achingly depressing “Miss Misery” was followed by Madonna’s arms in peak American Gladiator mode?

Humming, The Wolf of Wall Street

Filed Under: Songs of the Week, Oscars, Her, u2, frozen, Pharrell Williams, Karen O, Academy Awards