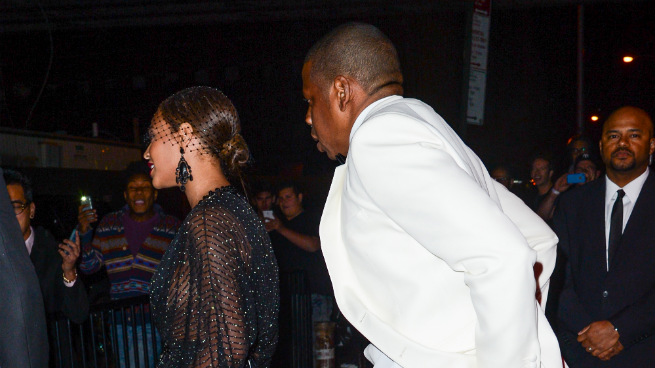 Do power couples owe their public everything or nothing? Can you sell some aspects of your life and retain any personal privacy? Jay Z and Beyoncé have leveraged their marriage into a brand. They topped Billboard’s Power 100 list and were edited onto the cover together. Tickets are already sold out for their On the Run dual-headlining stadium tour, and by now the average price of a scalped ticket is $342.67, more expensive than tickets for either of their solo tours. By way of comparison, tickets for Eminem and Rihanna’s “Monster” tour are going for about half as much. But Eminem and Rihanna are just artistic collaborators. The excitement of the On the Run tour was that it might shine a light into the private world of the Carters.

It’s been a crazy few weeks for private leaks: First the Donald Sterling and V. Stiviano tape toppled the racist Clippers owner, and now a camera-phone recording of an elevator security monitor showing Solange Knowles and Jay Z having a physical altercation is the latest secret surveillance bombshell. The fight, which took place at a Met Ball after-party at the Standard Hotel in New York City last week, is very hard to watch, because it is obviously genuine and because we clearly were never meant to see it. However much we might have thought we wanted to peek behind the glass, watching the TMZ video is uncomfortable.

In the video, Beyoncé, dressed like a mafia widow, reacts strangely by not reacting at all. Caught between her sister and her husband, she outwardly sides with neither. Attempting to figure out what is going on in the tape is like watching a Brian De Palma movie. It’s not clear enough to lip-read, but there’s a lot of body language to decode, as well as what’s on the public record. Beyoncé and Solange recently performed their close sisterhood in front of a crowd at Coachella. Beyoncé and Jay Z are going on the tour together no matter what.

What went down among Beyoncé, Solange, and Jay Z in the elevator is the new “Who is the Yellow King?” Why is Solange so angry? Why doesn’t Bey try to break it up? Who leaked this video, anyway? It’s not that the public wants to feed on Beyoncé’s private pain like scum-sucking vampires, although some people certainly do. Beyoncé’s family drama has been leaked to the public before, when she fired her father, the manager who had groomed her into superstardom, after it came out that he had been cheating on her mother. She doesn’t generally talk about it publicly. Beyoncé and Jay Z will most likely never put out a statement about the elevator incident, because commenting would only bring more attention to it. Most likely they will try to maintain their image as a classy, discreet couple by brushing this latest bit of dirt off their respective shoulders and never revealing what happened.

Beyoncé’s “Partition” is all about the ultimate luxury for an A-list couple: privacy. Couples don’t roll up partitions or close doors just so they can have sex. Sometimes it’s so they can fight in private. Celebrities stay at chic hotels because of the promise that their privacy will be respected. The whole reason the Chateau Marmont is so popular with celebrities is that it has a no-photo/tweeting policy so that famous people will feel comfortable. No snitching, essentially.  This is the most unexpected scandal since paparazzi caught Kristen Stewart cheating on Robert Pattinson with her Snow White and the Huntsman director, Rupert Sanders. It also reminds me of when Britney Spears’s medical records were leaked.

Yesterday, Bey and Jay were courtside at the Nets-Heat game with no sign of whatever private turmoil occurred last week. Honestly, I think it’s kind of comforting that the Knowles-Carter union might not be as perfect as it seems on the surface. You always get the sense that Beyoncé is holding on to some part of her life for herself, even as she gives us everything as a performer, and I respect her ability to compartmentalize. Coupledom requires a kind of omertà. Maybe everything isn’t always perfect in the private world of a couple, even a very rich, famous, and powerful pair with a seemingly ideal life. Sometimes people fight behind closed doors, and sometimes romantic partners clash with family members. All this says to me is that Jay Z and Beyoncé are a pretty normal couple after all.

Where in the World Is Casey Kasem?