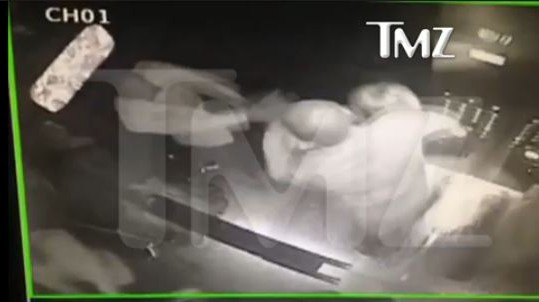 Earlier today, TMZ posted a security camera video of Solange attacking brother-in-law Jay Z in an elevator at the Standard Hotel in New York following the Met Ball. Beyoncé seems to be standing by and letting the fight happen. We asked the staff: What the hell is going on here?

Zach Dionne: Jay’s earning a (significantly?) bigger cut on the On the Run super-tour with Beyoncé; this is what happens when Solange finds out. Each time she strikes him, she’s saying the name of a Bey song that’s better than Jay’s entire post–Black Album career. “‘COUNTDOWN’!” “‘FLAWLESS’!!” “MOTHERFUCKING ‘PARTITION’!!!”

Steven Hyden: I have two theories. The first: The video was staged. While we’re busy talking about this, the shadowy Black Hand that controls human civilization is quietly rounding up the latest group of uncovered dissidents and and swiftly transporting them to a top-secret work camp. The second: Jay was caught sexting with newly single Gwyneth.

Wesley Morris: Whatever “This time it’s personal” means outside of Jaws: The Revenge, this is it. I’m very sorry I had to watch that yet half hoping it’s on her mind when she goes back into the studio.

Juliet Litman: A few minutes earlier, Solange started telling Emma Stone and Andrew Garfield about how she doesn’t think the U.S. should withdraw troops from the conflict in Vietnam, while Jay Z interjected to cut her off to say that he stands with the president. He has always supported the president. Solange was pissed that he embarrassed her like that, and, no, she does not want to sit outside.

Mark Lisanti: [Jay Z, whispering.] “You know, everyone thinks you’re secretly the more talented one.” [Jay Z, laughing loudly.] Just playing! Bey is so much better. Don’t be crazy. Can you press P1?”

Amos Barshad: Jay accidentally let it slip about that time he and Bey went to Roberta’s with Chris from Grizzly Bear and totally didn’t even invite her.

Bill Simmons: My initial thought: Solange is a huge OKC fan who didn’t appreciate Jay making fun of Scottie Brooks running the same high-post iso play for KD 23 straight times down the stretch of Game 4. But the “Solange saw Jay Z flirting with some floozy, took it personally and unleashed some sisterly justice on him” theory just seems more likely. Either way, I think it’s important to remember in these trying times that New York is still the concrete jungle where dreams are made and where there’s nothing you can’t do — like kicking Jay Z in an elevator.

"I will confess, however, that when Sony called me on Friday with the news, there was brief discussion at the end of the call about the concept of the show living elsewhere, and I was definitely in the “eh” column. For a million reasons, some selfish, some creative, one logistic, five sexual, three racist (in a good way) and, oddly, nine isometric. I won’t bore you with them. [...] But it doesn’t matter right now WHY I’d be lukewarm or if my reasons would be valid, what matters is, I won’t be lukewarm. I’ll heat up." -- Dan Harmon on the idea of continuing 'Community' away from NBC