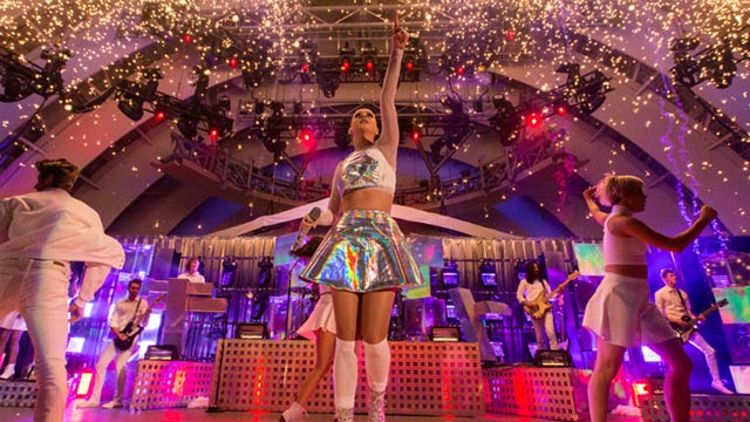 Last night, Molly Lambert and Tess Lynch ventured once more into the Hollywood Bowl, for the Katy Perry We Can Survive breast cancer benefit concert. It was truly the night of a thousand women. Well, OK, seven — Bonnie McKee, Kacey Musgraves, Tegan and Sara, Sara Bareilles, Ellie Goulding, and the lilac-lipsticked “Roar”-meister herself. We wondered how the Katy experience would measure up to the fine evening we spent at the Bowl with her boyfriend, John Mayer, earlier this month, and we traveled up several flights of stairless escalators to survey the Katycat scene.

Molly Lambert: It was another gorgeous night in the most beautiful venue in L.A., but with a totally different demographic than the Mayer concert. For one, there were children. Lots of them, everywhere, in tutus and glitter and rainbow-colored wigs. It was like being at a baby rave. Plus, instead of last time’s garlic mayo–and–weed smoke vibe, Katy Perry’s curated night smelled like caramel popcorn.

Tess Lynch: A kid fell onto our feet on the escalator, and we realized that instead of the drunk couples roaming around at the Mayer concert, this crowd was super-buzzed on Mountain Dew and Swedish Fish. The energy was crazy, plus all the musicians kept thanking everyone for buying tickets in support of the Young Survival Coalition, so in addition to the sugar and caffeine, everyone was feeling pretty good about themselves. Katy Perry handpicked the other artists, too, and was pretty candid.

Lambert: It was an inspiring night. Is it OK to say that? That I felt uplifted and inspired?

Lynch: I was inspired, too! There were many dazzling lights. What are those things called?

Lambert: I think they’re still called glow sticks, but I feel like the LED ones should be called something else.

Lambert: I call them “bioluminescent jellyfish tentacle wands” in my mind. Maybe rave aesthetics have moved into every genre.

Lynch: How would you rate the pre-Katy acts?

Lambert: Well, I love Tegan and Sara, and I thought they were great. They were the surprise guest when I saw Taylor Swift, and they seemed a little wonderstruck, if you will, by her big stage set. They seemed more comfortable at the Bowl.

Lynch: (An aside: we had really great seats, and I could not stop obsessing about Tegan’s skin. We also both commented on Ellie Goulding’s shoes, which were very impressive. It was hard to step out of lady mode in this environment.)

I appreciated the fact that this stage setup was so straightforward. It worked for everyone, and who needs trap doors when you have pyrotechnics?

Lambert: I liked when I told you that T&S were Canadian and you said, “Oh, that’s why Tegan has such great skin.” Can you elaborate on your theories about Canadian skin care?

Lynch: Everyone I know who’s Canadian has a glow. They know something we don’t.

Lambert: I figured it was something about, like, the air up north.

One of the awesome things about this show was that there was never any lag time between acts. They kept it moving the whole night. Even Katy’s set was just the other side of the opening acts’ set.

Lynch: Yes, they wasted no time. Both the Mayer concert and this one were sold out, but this one felt much more crowded. Maybe that’s because children move so fast, they seem to take up more space around their bodies. We also saw some teenagers dressed as fairies climbing trees and taking pictures of one another.

Lambert: Yeah, it felt a lot like Disneyland, this sort of whimsical chaos. Tegan and Sara also had the most charming stage banter.

Lynch: It was about borrowing tights and feeling naked in muumuus. Who can’t relate?

Tell me, Molly, what you thought of Sara Bareilles.

Lambert: Ha-ha-ha. Well, first we should say that we missed Bonnie McKee and Kacey Musgraves, who both came out at the very end. And now I feel like I’m walking into a piano-shaped trap.

Lynch: Hide under this fedora, where no one can see you.

Lambert: I am not the biggest Sara Bareilles stan. BUT I may have an internalized prejudice against certain kinds of singer-songwriters. Especially piano-based.

Lambert: Yes, too much earnestness makes my skin crawl. You compared her to Jason Mraz, which seemed apt. They both like to wear hats. The crowd was loving it, though, and I felt alienated from everyone.

Lynch: Bareilles was very pleasant, but she did have a Mraziness to her. She seemed to be really great with the younger set especially, because everyone under 12 digs a sing-along. Then again, she did drop an F-bomb. I kind of liked the F-bomb.

Lambert: Yeah, that won me over too. It summed up the whole night in a way. Good clean fun with a [WINKY FACE EMOTICON].

Lynch: I wouldn’t have wanted to follow Tegan and Sara. Everyone developed crushes on them during their set. Ellie Goulding was also very charming.

Lynch: She had some sound issues after removing her jacket, and had to wait around while it was getting fixed. She said she was “quite shy” and wiggled around. Perhaps that was divisive.

Lambert: I kept saying that Ellie reminded me of Lita Ford, because her one move was doing this sort of guitar solo backbend, and then she did it with an actual guitar and I was even more into that. I love dubstep as hair metal.

Lynch: Her hair was a huge presence in this concert.

Lambert: We were debating whether it was a Kim Zolciak–esque weave for a while.

Lynch: I was dying to know what Katy would wear, and when the platform revolved and she emerged for “I Kissed a Girl,” it was not what I expected.

Lambert: What did you expect? Perhaps a jungle-leaf bra or white miniskirt combo?

Lynch: This, basically. So, yeah, what you said.

Lynch: What does Prism mean in the context of a metallic, flared miniskirt?

Lambert: Well, it made me realize that her styling this era has been totally Amber from Clueless.

Lambert: Does the purple lipstick make the prismatic outfit goth?

Lynch: It was the purple lipstick and very tight ponytail.

Lambert: The ponytail was very Madonna.

Lynch: I guess the whole look was pretty Madonna.

Were you excited to see Juicy J guest on “Dark Horse”? I was. It almost made me forget my disappointment when, later, Snoopzilla failed to appear for “California Gurls.”

Lambert: Oh my god, I was so excited for Juicy J, and also vaguely embarrassed he was there, but like, you do you, Juicy J. We were definitely the only ones yelling out a request for “Slob on My Knob.”

Lynch: I still don’t see why they didn’t all get together for that one.

After Juicy J left, Katy performed “Part of Me” and “By the Grace of God.” The whole time, I was thinking about that video of Russell Brand that went around earlier this week. It gave me feelings. That part of the show seemed really personal. I still don’t like “By the Grace Of God,” though.

Lambert: Oh my god, let’s talk about how she subtweeted Russell.

Lynch: At one point before “Unconditionally,” she was talking about universal love, and she totally shaded Russell for that picture he tweeted of her without makeup.

The context was something like, “You know that person who makes you so insecure you feel like you have to wear makeup to bed?”

Lambert: Yeah! Followed by like, “I used to be that girl, but I’m not anymore.” Oh man, Katy is so likable.

Lynch: I still think that was such a lousy thing to do.

Lambert: Yeah, boooo Russell. He also broke up with her via text, which she sings about in “Ghost,” another song off Prism that she didn’t do at this show.

Lynch: It was impossible not to root for Katy after that. I mean, seriously. That picture speaks of something so dark.

I was glad she busted “Teenage Dream” right after “California Gurls.” Her voice sounded great. I wondered how much it was sweetened, but I didn’t actually care.

She sold her Prism tracks well — she really played up how vulnerable she felt about them, so you couldn’t ignore them as easily as you would have if you had already decided Prism was too adult-contemporary for you. But nobody was going to leave without “Teenage Dream.” The strobe part of “Walking on Air” really tortures me, though. It was pretty much the same performance we saw on SNL.

Lambert: “By the Grace of God” was a weird choice. There are a lot of other Prism songs I would’ve liked to hear before that one, including some from the more adult-contemporary second half of the album. But yeah, hearing “California Gurls” reminded me I didn’t really like that song very much. And maybe “Roar” is just Prism’s equivalent? But then again, “Roar” sounded great tonight. “Teenage Dream” sounded better, because “‘Teenage Dream’ is a perfect pop song,” as Grantland’s Juliet Litman (who was also in attendance) texted me after the show.

Lynch: It is. But really, I never was all that keen on “Firework” until it slapped the hater out of me last night. It was the last song before the encore, and everybody there was feeling those fireworks over the stage SO MUCH. The 5-year-old in a pompom hat, the surly older gentleman near us who was probably one of the teenager’s dads, the ushers. Everybody.

Lambert: It has also just been long enough since we heard the Teenage Dream songs that we’re not SO SICK of them like everyone was when they were supersaturated. You can appreciate them again for what they are: sick jams. But the fireworks made us dumb, in a good way. We turned into Katycat kids for a few moments.

Lynch: It was Katy’s first performance at the Hollywood Bowl, and she called out all the different sections. It felt kind of like she’d thrown a big outdoor slumber party and then served a giant ice cream cake of visuals at the end.

Lambert: She’s pretty irrepressible, but I never felt hammered over the head. Just sort of like, glittered on.

Lynch: Every time we go to the Hollywood Bowl together, we leave less cynical. Even with the stacked parking.

Lambert:  We left feeling totally euphoric and ready to line up for tickets to the Prism tour. 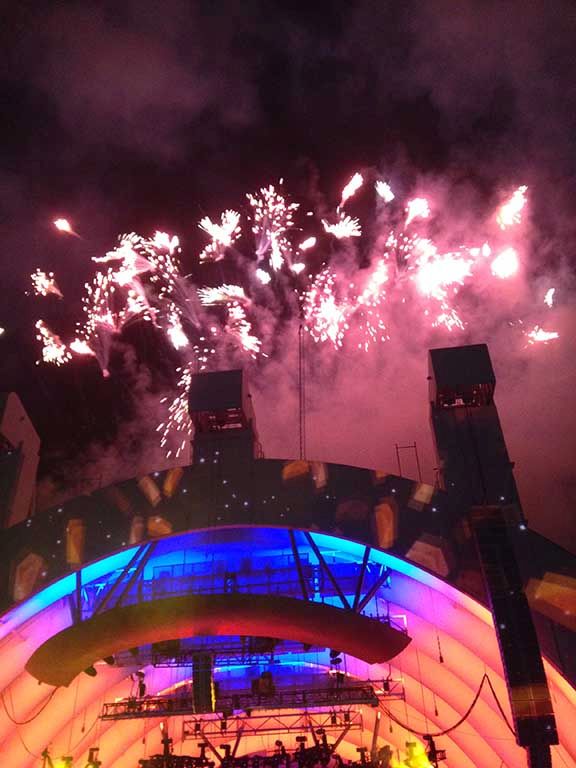