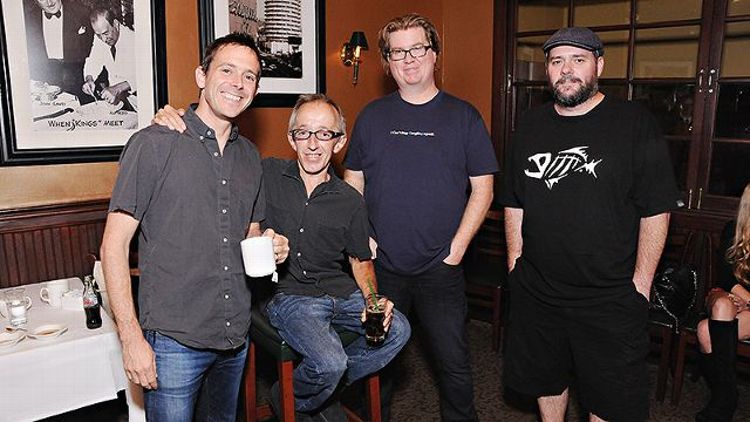 Welcome to Escape From Pop Purgatory, where we check out new music made by people who are more well known than 98 percent of the oppressively “cool” artists over whom the media obsesses, and yet are commonly perceived to be years past the point of their cultural relevance. (Pop Purgatory is fame plus time.) Because we’re unwilling to let albums released by established if unfashionable pop culture institutions come and go without a proper listen, we’re giving these damned souls a shot at redemption — or at least some much-needed publicity outside of their respective fan bubbles. In this installment, we look at the new album by nice-guy ’90s alt-rockers Toad the Wet Sprocket.

Period of Peak Fame: 1991-94. Toad the Wet Sprocket wasn’t necessarily huge in the ’90s — in the realm of whimsically monikered pop-rock groups, Toad the Wet Sprocket lagged considerably behind Hootie & the Blowfish and Barenaked Ladies in terms of radio popularity and record sales (though it did rank ahead of Crash Test Dummies). But, as we’ve witnessed time and again in this column, it was absurdly easy to move units 20 years ago — so much so that Toad the Wet Sprocket had not one but two platinum albums, 1991’s Fear and 1994’s Dulcinea. The group essentially subletted from R.E.M. on the pop charts, utilizing the slightly quirky but still immediate pop of the latter’s Out of Time period as a blueprint for hits like “All I Want,” “Walk on the Ocean,” and “Fall Down.”


What’s Happened Since: Familiar-story alert: In 1997, Toad the Wet Sprocket released Coil, the band’s requisite “post alt-rock boom times” record, which failed to even go gold. The following year, the band broke up because of ur-requisite creative differences, and lead singer Glen Phillips commenced a solo career. Toad the Wet Sprocket went on to be remembered as the Strawberry Alarm Clock of the ’90s — an easy punch line with a stupid name signifying everything that’s dated and harmlessly white-bread about the youth culture of its era.

Where They Are Now: Here’s the thing about “irrelevant” ’90s bands that secretly sold a ton of albums: They have fans with fabulous memories who still listen exclusively to ’90s bands. This explains why Toad the Wet Sprocket was able to raise $50,000 for the recording of its first album in 16 years, New Constellation, in less than 24 hours. (The group went on to raise an additional $214,000 after that. “Walk on the Ocean” changed lives, man.) Because this group was basically willed back into existence by the financial support of stalwarts, it’s not really surprising that Constellation is very MOR even by this band’s stringent middle-riding tendencies. Whatever the opposite of a power chord is, that’s what the guitar playing sounds like on this record. The attempts that Toad the Wet Sprocket gamely made in the ’90s to rock — that riff on “Fall Down” is sort of gritty in a watered-down New Miserable Experience kind of way — are gently retired on Constellation. From the beginning, this album was a risk-averse investment tasked with delivering modest but reliable returns.

Representative Track: For the record, I think it’s now illegal for a band to sound as unironically Caucasian as Toad the Wet Sprocket does on New Constellation’s title track. Fortunately, late 20th-century pop-rock bands get the grandfather exception.

Escape From Pop Purgatory: No, though Toad the Wet Sprocket is obviously content staying right where it is.