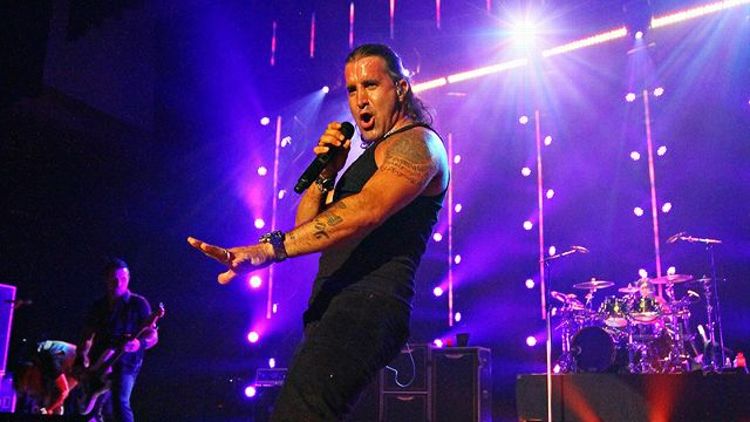 Welcome to Escape From Pop Purgatory, where we check out new music made by people who are more well-known than 98 percent of the oppressively “cool” artists over whom the media obsesses, and yet are commonly perceived to be years past the point of their cultural relevance. (Pop Purgatory is fame plus time.) Because we’re unwilling to let albums released by established if unfashionable pop culture institutions come and go without a proper listen, we’re giving these damned souls a shot at redemption — or at least some much-needed publicity outside their respective fan bubbles. In this installment, we look at the new album by former Creed singer and popular rock punch line Scott Stapp.

Period of Peak Fame: 1997-2001. Before I dig elbows-deep into Stapp’s latest solo statement, I want to be clear about my intentions. Most rock critics are physically incapable of writing about Creed without immediately devolving into a douche-nozzle dismemberment device. The compulsion to ridicule this band is simply too powerful. (For instance, I have already implicitly called Stapp a douche-nozzle.) But I want to be better than that, and confront the new Stapp album on its own terms, the way my hero Roger Ebert would when confronted with a new Deuce Bigalow film.

If only Stapp didn’t make mockery such an easy and enticing proposition. As Creed’s figurehead, he was easily the most recognizable and therefore most ridiculous band member. As far as most people are concerned, whether they like Creed or hate Creed, Scott Stapp is Creed. This is obviously a mixed blessing for the other dudes in Creed. Associating with Stapp is like having sex with an insanely rich man infected with herpes — sure, you might get a nice apartment out of the transaction, but you’re also irrevocably tainted.

No matter how evenhanded I try to be about Creed’s music, which is at worst soullessly generic and at best harmlessly boneheaded, Stapp’s unrepentant jackassery always pulls me back into an irreverent pose. Take the video for “Higher,” one of Creed’s biggest late ’90s hits. As a song, it’s workmanlike rock radio fodder that isn’t quite as hateable as people believe. As a showcase for Stapp’s comically overblown persona, however, it’s unintentionally hilarious. I mean, the guy frickin’ levitates while striking a Jesus Christ pose in the video eight years after Chris Cornell made fun of rock singers striking a Jesus Christ pose in a Soundgarden song. This suggests that while Stapp famously pilfered from vintage grunge acts, he wasn’t necessarily a student of them.

Look, it’s not going to be easy, but I’m going to buckle down and address this album with the thoughtfulness that all music deserves. I’m a professional, damn it.

What’s Happened Since: Stapp had a rough early ’00s. He was famously sued by fans after appearing drunk on stage at a Creed concert in Chicago, which turned a snarky critical inquiry into an actual legal question: Is it possible for something to be too shitty for Creed fans? (Sorry. That one just slipped out.) Creed broke up in 2004 as Stapp descended into a morass of alcohol and drug abuse. In 2002, he was arrested for drunk driving, and the following year he pondered suicide, according to an interview he later gave to Rolling Stone. (He believed the Creed camp wanted him to be a “Kurt Cobain martyr-type,” therefore goosing record sales.) By 2005, he pulled himself together enough to record his first solo album, The Great Divide, and by the end of the decade he was back touring again with Creed. So, you know, a happy ending for everyone.

Where He Is Now: Stapp appears to be in a good place in his personal life. He’s married to a former Miss New York USA winner, and he has three kids. (His oldest, Jagger, was the subject of Creed’s “With Arms Wide Open.”) But Stapp isn’t allowed to write songs about how bitchin’ it is to wed a pageant winner. You must summon your inner angst and flex your sizable persecution complex to make Creed and Creed-like music. On Proof of Life, Stapp is preoccupied with fighting metaphors and battling amorphous, unseen forces that conspire to keep him from being the Scott Stapp he was born to be. “Why can’t I be who I am?” he demands over battering-ram guitars on the lead-footed harangue “Who I Am.” Yeah, Mr. Vaguely Defined Adversity, what’s your deal, bro? “I came to win, I came to destroy,” Stapp bellows, his epiglottis vibrating with intense purpose. Clearly, Stapp feels besieged, and he’s not about to take it lying down. “Is that all you got? C’mon, hit me more,” he taunts on “Hit Me More.” “I want you to give me your best Muhammad Ali.” (Hearing Stapp sing “Ma-hamid A-leee” is exactly as incredible as you’d imagine.)

Musically, Proof of Life is a slight pivot away from Creed’s signature sound, pushing Stapp toward Matchbox Twenty–style, MOR pop-rock. (Several tracks feature a light sprinkling of electronic shadings.) In an interview with CBSNews.com, Stapp described Proof of Life the only way he knows how: with a whole lot of clichés. “The seeds were planted in 2007. I just had a lot to go through and to get through in order for it to be born,” he said. “I’m glad it’s finally here. It’s a huge sense of accomplishment and I feel like almost a weight has been lifted that it’s finished.” This record wouldn’t exist without the planting of seeds, the lifting of weights, and the birthing of emotions. Unfortunately, Stapp delivers his new songs with the originality and subtlety of his sound bites. On “Break Out,” he defiantly states his intentions to “break free” from whatever constrains millionaire rock stars who never have to work another day in their lives. (Later, he says he’s “not gonna think twice,” because the problem with Stapp in the past obviously has been his tendency to be overanalytical in his lyrics.)

Representative Track: When scanning the track list for Proof of Life, the song I was immediately most interested in hearing was “Jesus Was a Rockstar,” for obvious reasons. (The main reason being that it was a Scott Stapp song called “Jesus Was a Rockstar.”) I was very curious to hear the scripture-based argument for Stapp’s claims. When I finally arrived at the song — out of respect for the artist, I listened to the songs on Proof of Life in order — the bullet points were familiar: Jesus cured the blind, brought the dead to life, and turned water into wine. When he spoke, he drew crowds, and he inspired whomever he encountered. But I couldn’t see how this made Jesus a rock star. Then I realized Stapp’s true point: It’s not that Jesus was a rock star, it’s that a rock star (specifically a rock star like Stapp) is just like Jesus. And that’s when I realized that writing about this profoundly stupid album non-ironically was impossible.

Escape From Pop Purgatory: If Stapp can cure the blind, then yes. Otherwise, no.