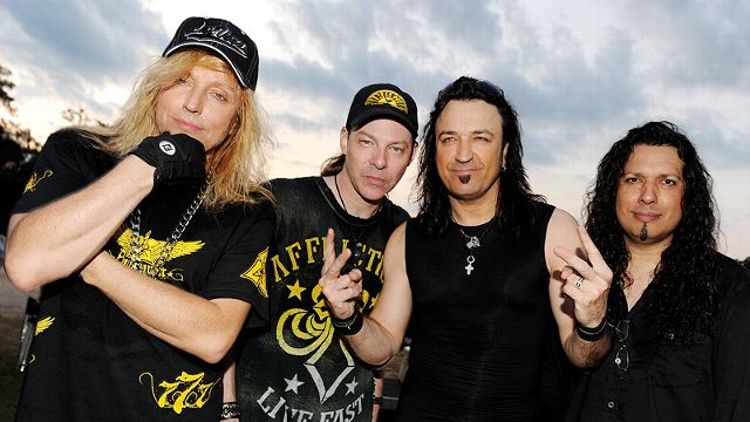 Welcome to Escape From Pop Purgatory, where we check out new music made by people who are more well-known than 98 percent of the oppressively “cool” artists over whom the media obsesses, and yet are commonly perceived to be years past the point of their cultural relevance. (Pop Purgatory is fame plus time.) Because we’re unwilling to let albums released by established if unfashionable pop-culture institutions come and go without a proper listen, we’re giving these damned souls a shot at redemption — or at least some much-needed publicity outside their respective fan bubbles. In this installment, we look at the new album by the most successful Christian metal band ever, Stryper.

Period of Peak Fame: 1986-88. There has never been a band that gave fewer fucks than Stryper. I understand that this might seem like a counterintuitive statement considering that Stryper famously fired Bibles into its audience while pointing a single finger to the heavens (rather than the satanic devil horns) and imploring fans to shout “777!” (instead of 666). When it comes to the never-ending battle between good and evil, and the unusual application of rock and roll against evil, Stryper did indeed give more fucks than most. But as far as caring about what’s cool, Stryper has always followed in its own perversely hallowed path. Seriously, is there a less desirable music genre than Christian heavy metal? As “Weird” Al has demonstrated, even Amish hip-hop has greater cachet. And yet, for a brief window of time in the mid-to-late ’80s, heavy metal was so popular (and feared) in Dungeons and Dragons–obsessed American culture that there was actually room for a bizarro alternative like Stryper on the radio and MTV.

Stryper’s 1986 album To Hell With the Devil is essentially the “Black Album” (Metallica edition) of Christian metal — it sold an astounding 2 million copies, far more than any record of its kind, and spawned legitimate hits with the sickeningly sweet power ballad “Honestly” (which nearly missed charting in the top 20 on Billboard’s singles chart) and “Calling on You,” which ranked among MTV’s most requested videos for a spell. Assuming that Stryper’s commercial success wasn’t fueled by rampant black-hearted ironic purchases, that’s a remarkable showing for a Christian act, no matter the genre.

The key to Stryper’s crossover appeal was (of course) obscuring its Christian message in songs that could just as easily be about a long-haired woman in flowing robes and sandals. “Calling on You,” for instance, is a fairly bitchin’ pop-metal track, with a workmanlike riff and searing, ELO-style backing vocals — it’s virtually indistinguishable from the field of Trixters and Wingers flooding the market at the time. But still, Stryper was a glam metal band, so it’s not like subtlety came naturally. Isiah 53:5 — the Bible verse from whence the name “Stryper” originates — is emblazoned right on the cover of To Hell With the Devil. And while Jesus isn’t name-dropped in “Forever,” the video makes it clear that Stryper is no mere Mötley Crüe knockoff. When the competition was dry-humping groupies and slamming Jack Daniel’s, these guys were kissing babies in front of American flags and rocking prayer circles backstage.

What’s Happened Since: With 1990’s Against the Law, Stryper attempted to pivot away from its God-rock reputation and toward a more conventionally metal sound and image. Oh, and they also decided to cover Earth, Wind & Fire’s “Shining Star” for some reason. This decision proved disastrous — the band’s religious fans bolted, and everybody else sensed desperation as glam entered the early stages of decomposition. Two years later, front man Michael Sweet departed Stryper and launched a successful career as a Christian artist.

Where They Are Now: Since re-forming at a Puerto Rican music festival in 1999, Stryper has toured regularly and put out five albums, including the new No More Hell to Pay. Remarkably, Pay became the band’s highest-charting album since 1988’s In God We Trust, debuting at no. 35 on the Billboard albums chart last week. In the realm of Stryper’s discography, Pay absolutely deserves to sell well. Yes, the songwriting is sometimes less than trenchant — like the song “Sticks & Stones,” which you assume isn’t going to incorporate the “sticks and stones may break my bones” nursery rhyme until the exact moment that it does. But Pay more or less delivers dependable throwback metal in tightly melodic and ridiculously operatic packages. And Stryper can still hit all the old paces with road-tested precision. The falsetto note that Michael Sweet pierces at the 1:23 mark of the title track is incredible. The guitar solo that squeals and then purrs for nearly 40 seconds on “The One” is gnarly. While the cover of “Jesus Is Just Alright” is a little on the nose, I could be talked into preferring it over the Doobie Brothers version.

No More Hell to Pay (along with recent efforts by Queensrÿche and Dream Theater) is part of a bumper crop of classicist metal records that I’ve dubbed TMS-core. Named after VH1’s venerable ’80s- and ’90s-favoring program That Metal Show, TMS-core records seek to re-create the sound of metal at its commercial prime for an audience unconcerned with what’s currently happening in the pop mainstream. (These groups typically only get press coverage outside of metal websites on TMS.) Media fragmentation, while hurting pop stars, greatly benefits artists that used to be pushed aside by restless media cycles. A band like Stryper can sell records in 2013 by sounding like Stryper in 1988 because there are people who never tired of liking that kind of rock music. And now, they never have to.

Representative Track: If anything, No More Hell to Play is somewhat heavier than those “classic” Stryper records, as the title track attests. This band has stuck around long enough to fine-tune its formula, with yellow-and-black striped guitars still intact.