For a Price, You Can Now Invite Your Favorite Top Chef Into Your Home, If That’s What You’re Into 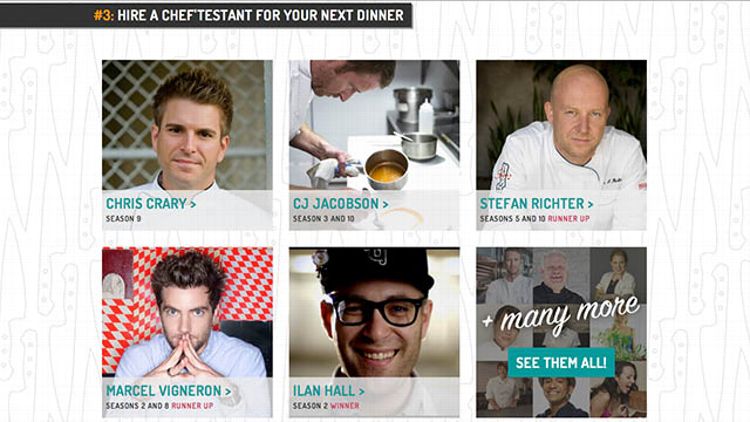 Top Chef, recently declared too “serious” for the Grantland Reality TV Fantasy League (because, as David Jacoby wrote, it didn’t contain enough “concealed erections or denied coitus” — a solid argument), has added another territory to its vast empire: your house. The show has joined forces with Kitchit, a goop-endorsed rent-a-chef service that allows you to choose a chef (Top or not) from its roster, with whom you can then create a customized menu for your party or event. The menu is priced per head and, according to Kitchit’s website, “the chef can play whatever role you’d like (hmmm) — whether it’s staying behind the scenes, introducing each dish as it’s served, or sharing insider stories from restaurant kitchens.” That means you can now hire CJ Jacobson, Richie Farina, Ilan Hall, or Jamie Lauren to do what you want to your pad thai if you live in one of Kitchit’s current markets (Chicago, Los Angeles, San Francisco, and New York).

Top Chef premiered in 2006 and has since spawned several international versions as well as a handful of spinoffs (Masters; Just Desserts; the Healthy Showdown web series; Life After Top Chef, in which the most memorable scene featured Fabio Viviani accidentally eating the wrapper of his In-N-Out burger; and the mysterious case of the disappearing Top Chef Junior, which was announced but never aired). It boasts an online culinary school, Top Chef University, a video game, a Food & Wine magazine tie-in, charity and holiday specials, and a line of cookbooks. It has inspired TV dinners labeled unfortunately as “Café Steamers,” which sounds like an Urban Dictionary term for an unmentionable act. But despite its reach, Top Chef is getting a little tired after 11 seasons.

What’s my evidence? Well, despite the declining general energy level of the judges, the New Orleans cheftestants were recently given a cream cheese challenge, and there was a poll asking viewers to rate guest judge John Besh’s hair (they found it to be just OK). There’s more: The chefs are being sucked into the Bravolebrity void. Season 5’s Jeff McInnis (who is not a sex object; he just worked at a place called DiLido Beach) is currently embroiled in a hot and salty argument with his ex-wife after allegedly “abandon[ing]” her and their daughter to romp around the N.Y. restaurant scene with this season’s Janine Booth. Top Chef has had its share of oddballs (John Tesar and his eccentric glasses-placement) and contestant rivalries (oh, that infamous pea puree), but even in its most personal incarnation, Life After Top Chef, the series was careful not to exploit its cast too much onscreen. It’s always about the food, and that brand of celebrity — cheflebrity? — seems like it’s a cut above the regular Bravo fare.

In a way, Top Chef has always seemed too highbrow for Bravo, a network that ironically found its footing as the most highbrow station of all. In the ’80s, Bravo was known for broadcasting international films, jazz concerts, and “documentaries about Latin America,” but after an early-aughts rebranding effort it became what we now know it to be: a knockoff purse that spills over with breast implants and appetizer trays, imprinting the assertation in its trademark sneer that it’s all ONLY BY BRAVO when you open it. I love Bravo for what it is — luxe trash — but the Top Chef contestants aren’t generally the types to risk damaging their reputations for the sake of the show. Its fans are loyal (some of them rabid food enthusiasts), and if the chefs compete well they can expect to enjoy a marked signal boost to drive fans to their restaurants. Maybe the Kitchit deal is what the show deserves: like appearance fees commanded by other reality stars for showing up to parties and events, but without the cringiness. There is an actual product — a premium product costing, in CJ’s case, $175 per person and involving “fresh market strawberry coulis” — to be sold, and 11 seasons worth of watering mouths to feed. It’s an enticingly intimate encounter with a TV personality and their creations, and a situation that seems like it could go horribly awry, like The King of Comedy with scallops. But I suppose that’s a risk you take when you can charge what you want. I hope none of the Kitchit customers try to pry out the “insider stories from restaurant kitchens” from their guest chefs, but if they were given willingly, that would be as satisfying as hearing your favorite protagonist read you fan fiction aloud while you slurp risotto. Sign me up when Tesar’s available. He’s got all the dirt. B:)