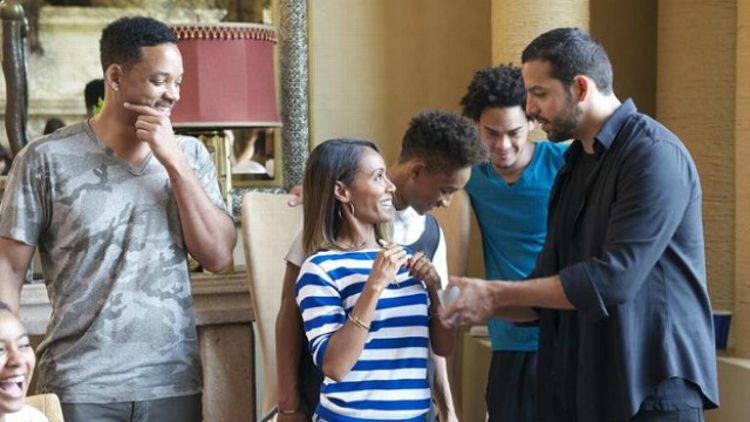 Cranston and Paul. Sudeikis and Wilde. Will and Jada and Willow and Jaden.

These were some of the groupings that got their lives rocked by magician spirit David Blaine during his 90-minute ABC special, David Blaine: Real or Magic, which aired last night.

In any Blaine special, you know you’re going to get a few things, always playing to his strengths. Some card tricks, a lot of calm talking, a hefty amount of glass eating, doing things with money, and magic done in the streets for groups of black people.

This is Blaine at his best: walking into a neighborhood and being a verifiable economic stimulus package, turning four teenage boys’ 10 dollars into 100 dollars.

And then, because they are black, and he is David Blaine, and this is magic, you get this reaction:

As Aziz Ansari said in his most recent stand-up special:

If anyone has footage of a black dude seeing a magic trick and not being blown away, show it to me, I’ll never say that again. But until I see that footage, that’s my favorite racial stereotype ever.

Me too, Aziz. He didn’t invent this theory, seeing as that I’ve been living it since the first time someone pulled a green bean casserole from behind my ear, but he couldn’t be more spot-on. And this special did wonders in making that exceptionally clear.

That wasn’t Blaine’s only trick, however. And the aforementioned celebrities were only a taste of the absurdity that was his crew of famous people to get BlainePunk’d.

Like the time he did magic on Kanye West and Woody Harrelson, who happened to be together. And the magic involved Blaine sticking an ice pick through his hand while Kanye watched. And then Blaine, in a classic Blainian move, getting Kanye involved by asking him to pull out the ice pick that was completely through his hand, because he’s a sorcerer.

Look at the way Kanye responds. Look at the glee and wonderment and hidden terror on his face, because Blaine is potentially the Lucifer foil to Kanye’s Yeezus. When is the last time you saw him react to something like a little boy? It’s been a while, right?

That’s what Blaine does to you.

Other people he did magic on in the special, in order of increasing “How did he get next to these people, do they not have security, or is security no match for a warlock?” status:

In a single magic special, Blaine did three-card monte in the lobby of a housing project, and also got the seal of approval from Hawking, via his speech synthesizer. Blaine has no peers, mainly because he’s probably not real.

Many of the clips are here and I highly recommend spending the entire day watching them. Things about the world become clearer after watching it. Like why Jaden has been acting so strange over the past few months. He got Blained too young.

Really, that’s the only thing that makes sense. That, and Blaine having complete mind control over the entire Smith household. It’s really a treat to watch Blaine harvest Will and Jada and Willow and Jaden’s souls on network television. Incredible stuff.

After this special, and everything in his past, you’re left wondering what (or who) he has left to conquer. What is the final act of David Blaine? Who’s left on his bucket list? Who’s the Blaine “final boss,” if you will?

Answer: Barack Obama. If he can make Barack react like a combination of Jaden, Will, Kanye, and those guys in the projects, with the end result being him running through the halls of the White House, ’01 Harlem Shaking, screaming “YO HOLDER, YOU GOT TO SEE THIS,” then Blaine wins.

Do You Like Prince Movies? Podcast: With Special Guest Bill Simmons!