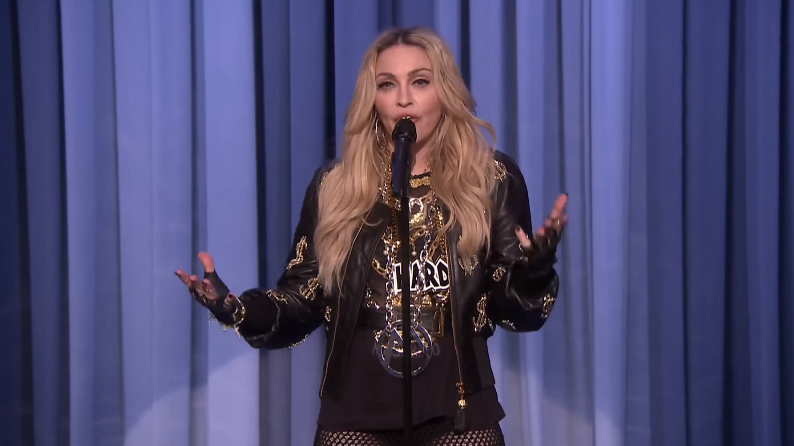 The Internet, in its ceaseless indignation, took to its fast-food-encrusted keyboards last week to discuss the most important issue of the day. No, not Iranian nuclear negotiations, nor the war in Yemen. Something far more important and far more terrifying — that Madonna performed stand-up comedy on The Tonight Show Starring Jimmy Fallon.

Twitter was a-titter with sass and snark; I’d link to some of the (no-doubt grammatically incorrect) tweets in question, but I’m not “that” type of journalist. Short story long, everyone was unilaterally horrified by Madge’s display.

For a first-timer, though, she really wasn’t all that bad.

I don’t mean to brag (because on no planet could this possibly be construed as bragging), but I host two (as in, more than one) open mics; this being the case, I consider myself a bit of an amateur comedy authority. On a weekly basis, you can find me listening to an endless cavalcade of clowners rambling about how hard it is to date and how easy it is to procure a medical marijuana card. When they inform the room it’s their first time performing, people are oft-inclined to give them a bit of a break. They invariably bomb nonetheless. Frankly, I wish more obscenely wealthy MILFs would show up at one of my mics and prattle on about how their former boy toys didn’t know who the hell Andy Warhol was.

Madonna certainly isn’t the first, nor will she be the last, celebrity to try her hand at the thankless, Sisyphean task of making a dark room of strangers eating chicken wings laugh. Copious online research (read: some light YouTubing) has revealed a number of sets performed by stars who had no business performing in the first place. I watched and compared their acts to those of actual amateurs so you don’t have to.

The former Laker and current Buddhist opens his set by asking the kind residents of Orange County to “make some noise”; they comply. By merely speaking, he kills far more than I ever have with written material. He informs the crowd that, even though he’s standing onstage at the Improv, he will not be telling any jokes. He fulfills this promise.

Score: 36 percent as good as comics who ask, of no one in particular, “So … what’s going on with me this week?”

As a card-carrying Friend of Tom, I’ve heard this set before; as a borderline madwoman who has all the Best Show sound collages saved on my phone, I have committed most of it to memory. In making the entirety of his set about his fear and inability to perform stand-up comedy, Grammer actually does a decent job of being an anti-comedian (or as I like to call them, “Kaufman-esque nightmares”). In spite of this, his highly relatable story about sailing fails to hit with the audience. Fun fact: This clip was taken from a 1994 showcase at the Just for Laughs Comedy Festival he cohosted. I’ve never showcased for JFL. This is quickly becoming depressing.

Score: 84 percent as good as that smelly prop comic who called himself “Mr. Television” and would cart a full-size replica television to open mics.

Sure, he may be an amateur, but if this clip’s any indication, Mayer has all the makings of a Catskills-honed hack. “Have you seen this?” he asks the crowd before describing the plot of To Catch a Predator, which I can only assume was a topical reference at the time. YouTube user “Jazzy Cat,” who uploaded the video, ends it with a message: “My advice to John? Your body may be a wonderland, but your comedy is not! Don’t quit your day job! LOL!!” LOL.

Epix’s slogan is “We Get Big Movies.” In this exclusive clip from Smith’s Too Fat for 40, it got bigger. Sweating like mad while wearing a novelty-size hockey jersey that reads, “Puck U,” Smith stands on a stage designed to look like the set from Clerks — y’know, the film that facilitated his entrance into pop culture. The quality of his material is “Puck U”–esque.

Score: 100 percent as good as every Bane impression I’ve ever seen.

Foley is a true Renaissance man — professional wrestler, New York Times best-selling author, and, now, joke slanger. He’s pretty successful, actually, and rightfully so — he’s the only celebrity on this list who writes real jokes. Granted, said jokes are about Jethro Tull and The Karate Kid, but they’re good enough to get him booked on @midnight. POINTS!

Score: 100 percent better than every Bane impression I’ve ever seen.

There are multiple clips over 20 minutes long of Piper doing stand-up online; I chose not to watch them, for life’s hard enough as is. In what is more a soliloquy than a set, delivered mostly to vacuous silence, Piper rambles about how Ric Flair is a piece of shit. Mercifully, the person recording the set on his phone was told to stop doing so about two minutes in.

Score: 17 percent as good as the host who once brought me offstage by telling the crowd I was a “hot piece of ass.”

Ah, Ron Jeremy and Juggalos — two great tastes that taste great together. A raucous crowd of Faygo-fueled gas station employees chant “whoop whoop!” during this, Jeremy’s set at the Gathering of the Juggalos, caterwauling in delight at his unspeakably blue material.1 His setup and delivery is classic, mid-century hackiness, but the subject matter is decidedly more “hip and with it.” It is a fascinating juxtaposition to witness. And good on him for bringing his own props, up to and including a bar of soap he drops during an inspired “prison sex” bit.

Score: 69 percent as good as this actual Juggalo performing stand-up.2

Megan Koester (@bornferal) is a stand-up comic and writer who lives in Los Angeles. She was named one of LA Weekly’s “Top 10 Comics to Watch in 2015.”