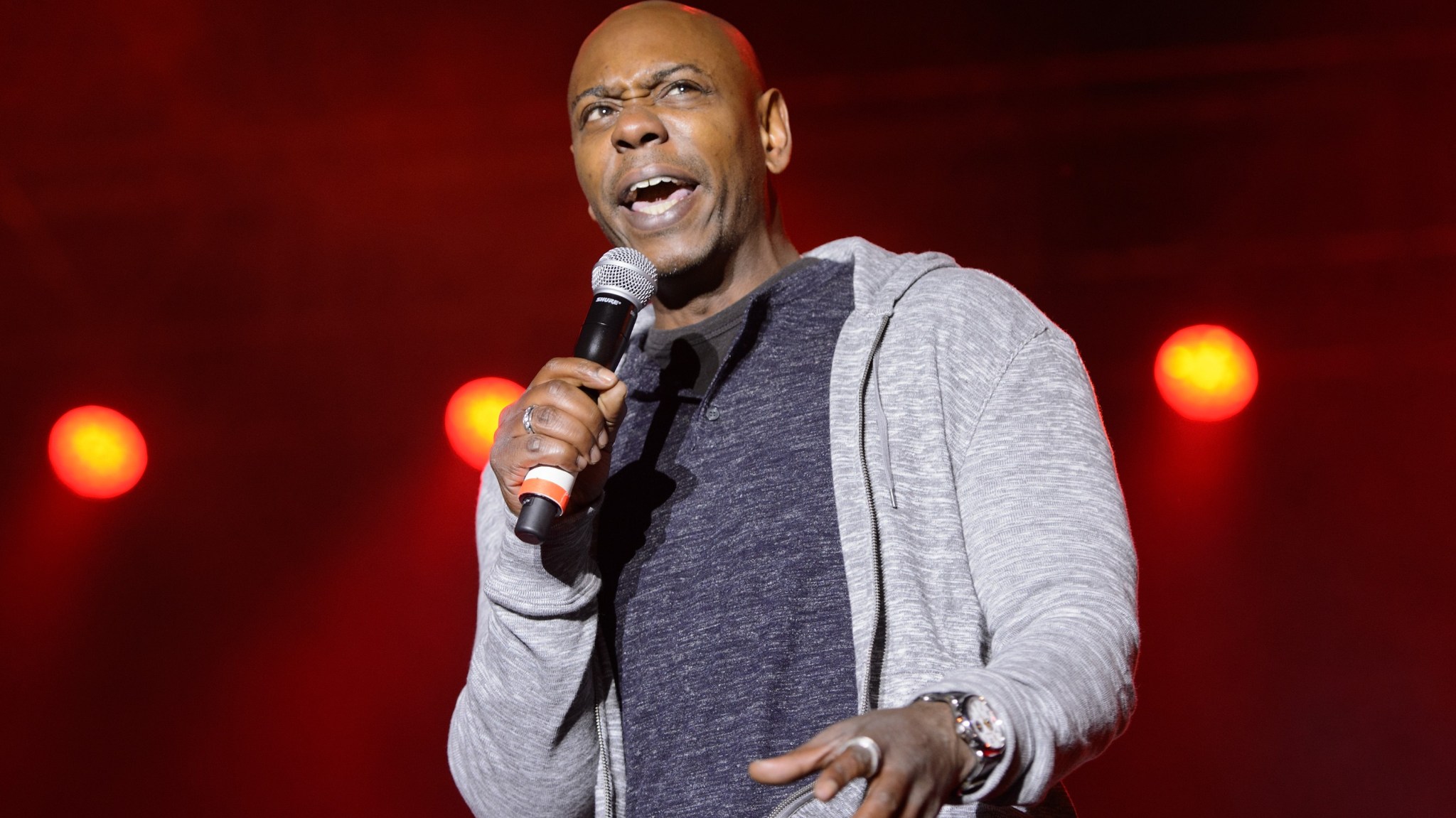 Between NBA All-Star Weekend and the SNL 40 celebration, this past weekend in New York was even more bold-named than usual.1 Which means Dave Chappelle’s five-night Gramercy Theatre residency got to slide a bit under the radar.

Tickets for every single performance still sold out, of course, and sold out fast, and then fetched hefty markup sums on the secondary market. For one thing, Gramercy is a 500-person venue.2 And for another: Despite his active and lovely 2014, Chappelle still feels, more or less, like a pop culture unicorn.

It seemed only appropriate, then, that last night — for the 10:30 p.m. show, the last one of the residency — we were asked to treat him with a certain hushed awe. Cell phones were strictly prohibited, the DJ warned before the set, and the bartender made sure to double down: “They’re serious with that shit!” Meanwhile, the bar could only serve in a rushed scramble in the minute or so of changeover between sets, which I don’t remember ever seeing at a show before.

It all seemed of a piece with Chappelle’s cautious return. First he co-headlined the lower-stakes Oddball Tour, then he bolted out on his own with a sparkling Radio City run; he covered GQ, and charmed Letterman, and could increasingly be found palling around with his famous friends and fans. And there was real hunger for him to go ahead and pop up with a monster: a late-night hosting gig! A movie! The New Chappelle’s Show! But he was intent on feeling his way back, one deliberated and controlled step at a time.

It’s tough for him to do that, though. Between the size of the venue, the lack of PR push, and the name of the run — “The Drawing Board” — it was clear the point was to lower expectations. And yet, as Dave’s DJ was fond of screaming — in between cutting from “Poison” to Queen to the goddamn Cheers theme song — “this is not your average comedy show, this is a Dave Chappelle show!” I mean: Rihanna, and her beautiful bedazzled denim jacket, and her human caravan, did brush by me.

Yes, that Shelley Long–loving DJ was right. When Chappelle finally did come out, in silhouette at first, a lit cigarette already in hand, it was enough to shock: We gasped, and cheered wildly. His abrupt departure and painful absence has ensured that, for at least the foreseeable future, every time out he’ll be greeted by an audience that, to some extent, is reacting like they’re seeing a dead man walking. “I see mostly white people,” he shot back. “Which means my financial situation is stable.”

Quickly, it became clear that Chappelle hadn’t mandated a strict cell phone ban because he didn’t want disruptions to affect his fragile psyche. He just wanted to talk shit without having to worry about where it’d end up tomorrow. He reminded us that these were jokes. He called it a Fight Club show: an underground thing, just for us here.

The point has been made, repeatedly, by titans of the form, that it’s unfair — and perhaps even reckless — to scrutinize material presented informally. Comedians can only work their stuff out in public, and that might mean awkward or offensive turns. Musicians don’t have to worry about hitting a wrong note on a guitar solo and having it become a national talking point. Chappelle seemed acutely aware that whatever he tossed off next could end up on Fox News all week.

Still: Loose and rambling, he went in. He’d just got back from London, he explained. “White Africa!” He was in Paris, too, where the citizens were still reeling from their “12-person 9/11.” He jumped to Oscar Pistorius and the audacity of white people: “I can’t let not having feet stop me from my dream!” Then he imagined Pistorius sharpening his blades into shivs in prison. He warned us: For 13 years, he’d cut back on booze and weed. But, “I should tell you, I’ve been drinking tonight.”

He struggled with his feelings on Bill Cosby, one of his comedy idols. He aptly and empathetically explained his understanding of the point of view of Cosby’s alleged victims, of why they’d be scared to come out, of why they’d do so years later. He imagined the conversations between rape victims and police investigators in the ’70s: “Back then, cops would just look you in the eyes and ask you if it happened. If you looked away — no conviction.”

He coughed. “I’ve been smoking weed, too.”

He got to Ferguson, and it was potent. He quoted the ugly, insane, fearmongering statements in Darren Wilson’s deposition: how Wilson said he felt “like a 5-year-old holding on to Hulk Hogan,” how it “looked like [Michael Brown] was almost bulking up to run through the shots.” Then he ticked off Wilson’s height and weight — 6-foot-3, 210 pounds — compared to Brown’s, who was about the same height but significantly heavier. “You understand what I’m saying? One’s in shape, the other one’s fat. And the other one didn’t have a utility belt full of options.”

As he moved to Eric Garner, who was killed while selling loose cigarettes in Staten Island, he wasn’t afraid to go for stretches without building to a joke. “In post-9/11 New York, it’s impossible to convict a cop.” Plus: “The only black people in Staten Island are the Wu-Tang Clan.”

“That shit’s not funny,” Chappelle would repeat throughout the set. “It’s not funny. Let’s not talk about that.” Then he’d pause. “No, let’s go there.” By the nature of it being Dave Chappelle talking, it had weight. But it wasn’t just that. His disposition was firm, and he was unafraid.

“When I’m in, you know, New Zealand, they treat me like I’m Thelonious Monk,” Chris Rock has said. “Like I’m John Coltrane. When Dave Chappelle is in London, that motherfucker is Miles Davis. That’s some shit. You make the money in America, but you are an artist when you leave America.”

Chappelle is only 41 years old. He’d been gone for a while, yeah. Maybe he’ll get back on TV (Netflix?! Amazon?!!). Maybe he never will. Either way, though, he’s got the rest of his life, if he wants, to be this artist.

“It’s not funny,” he’d say. “Let’s not talk about that.” Then he’d go in. “Donald Sterling — if you’re racist, maybe don’t tell your black girlfriend about it.” Pause. “That guy was fuckin’ 40 years before Cosby’s first rapes.” Pause. “These jokes are dark. I know! I’m sorry! Speaking of AIDS …”

At one point, he circled back to his and his fans’ dual obsession: his departure from Chappelle’s Show. Once again, he took responsibility for what happened, which was answered with a cheer from a white dude. “Thanks for validating me, champ.” He took a shot — well-deserved, but still surprising: “I need money … it’s cold out here! And I’m watching Key & Peele do my show every week.” Sharp, shocked laughs. “Chappelle’s Show lite, that’s what that is.” And as always, he managed to perfectly pin down his particular predicament: Even he’s not sure if he did the right thing. His friends told him, Fuck that money, at least you have your integrity, he recalled. “Yeah. Me and my kids love integrity sandwiches.”

He kept going, riffing off audience suggestions with intermittent brilliance, searching for that last good bit to close out on big. It never quite came. And he was fine with that. From that point of view, this tossed-off Gramercy run was quite possibly a more encouraging sign than his Radio City one. The latter felt a little bit inevitable: He was going to take a big shot at some point, right? The former is the more auspicious sign. In 2015, Dave is pleased. He’s feeling himself more and more. He’s just gonna keep on keeping on.

By the end of the night, he’d pose on stage, letting the crowd finally snap the pics they’d been dying to get. Then, to the sound of “CoCo,” he stage-dived.

But before that, he called up his old Chappelle’s Show pal Donnell Rawlings, a.k.a. Ashy Larry, who’d opened the show.

He gave him the mic. “Close me out, Donnell.”