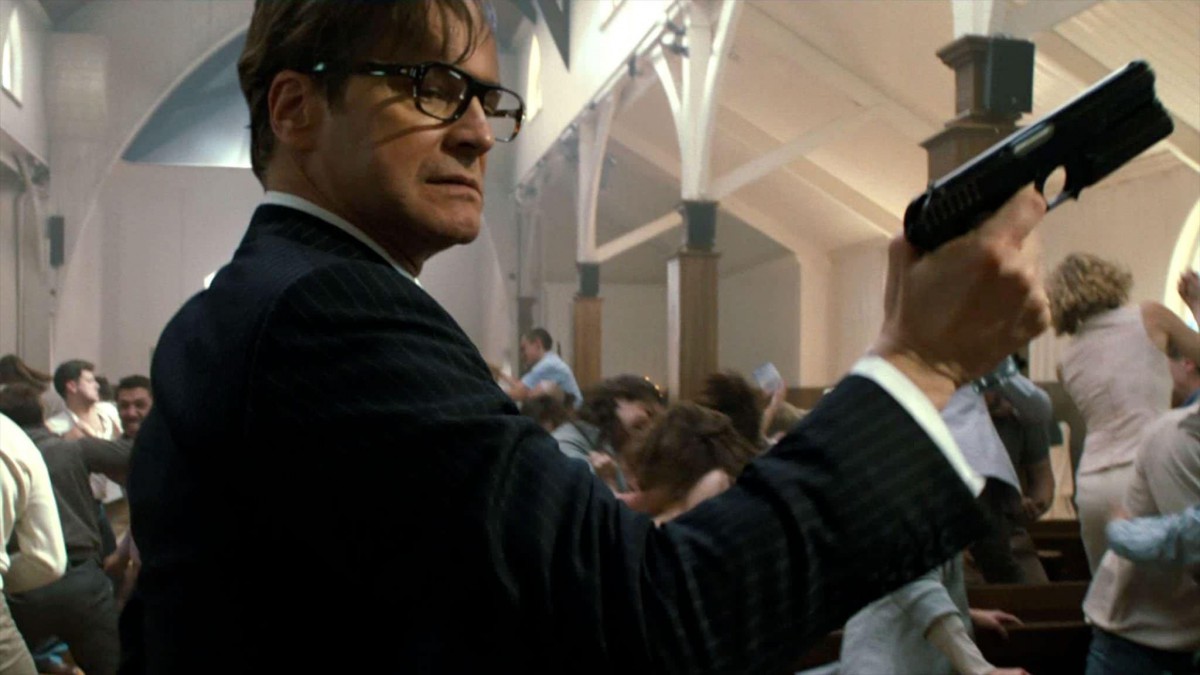 Sometimes it’s easy to spot a director’s favorite scene. Your pulse may not always go up, but it’s clear his does. The filmmaking changes. It was obvious, for instance, when David Fincher finally came alive in Gone Girl. The bucket of blood he’d been careful not to spill for 100 minutes finally tipped over. The film’s style loosened up just as the mystery got good and lurid. Kingsman: The Secret Service has a moment like that. One of the movie’s elite English spies — the one played by Colin Firth — drops in on a Kentucky church teeming with flamboyantly racist rednecks who turn into killer drones before a melée erupts. Why it has broken out and what Firth is doing at the center is a plot point for someone else to spoil, but the orchestrated chaos shoves the filmmaking into a new dimension of violence.

The parishioners and Firth attack each other with guns, knives, an ax, a pole, and whatever else isn’t nailed to the floor. The camera makes promiscuous leaps among attacking bodies the way a virus invades a host. Firth swerves and pirouettes from fighter to fighter, wielding something weaponized. He’s got big black glasses, and for about two minutes, he does such smooth battle that his hair is barely mussed. This is a variation on the joke told every time Firth uses his legs and fists to clean house in this movie: King George, the Thug-Zombie Slayer. By this point, there’s already been a long skydiving sequence, but the energy in this brawl is akin to being sucked out of a plane at 30,000 feet. Maybe it’s fun, but it feels like a hazard, too: You can’t breathe.

I’m sure director Matthew Vaughn would say he loves all of Kingsman, which is based on the Secret Service comic-book series and features a young U.K. street tough named Eggsy (Taron Egerton) training to become a superagent. However, that church brawl feels like a sequence that, for Vaughn, justifies making the rest of the movie. He wants it be a violent, rock-and-roll aria. But unlike, say, any one sequence in a Transporter film, either of the Raid extravaganzas, the preposterously amazing Old Boy or The Yellow Sea, the “Crazy 88” climax of Kill Bill Vol. 1, or the Guggenheim ramp shootout in The International, Vaughn’s mayhem moves so fast that it’s hard to believe. Firth seems insulated from harm by both his cool and the effects. Any sense of triumph is purely at the level of stuntcraft. The rest feels less than the sum of the moving parts. The sequence, for one thing, is almost ancillary to the story. For another, Firth is the only actual character in this video game. If this is an aria, it feels lip-synched.

Vaughn is a synthetic director. He must know it. The opening lick of Kingsman belongs to Sting singing “I want my MTV” from Dire Straits’s “Money for Nothing.” There are jokes about 24 and the Bourne movies, and constant allusions to James Bond. The nostalgic shots of boom boxes evoke the more convincingly loose Guardians of the Galaxy, and the satire here would be better off in the hands of a director like Edgar Wright, who can take a good script and give it strangeness and heart.

This film is a lot of zero-calorie flash that makes Guy Ritchie look like John Frankenheimer. Ritchie is insufferably derivative, but at least his commitment to masculinity can be sexy. His best capers are hung, while Vaughn’s pants feel stuffed. Vaughn does have a competence that tends to elude a filmmaker like Ritchie. Kingsman is well oiled. Its trapdoor opens smoothly and the vengeful jaunts to Eggsy’s fraught home life, which he shares with his mother and her abusive mobster husband, satisfy the itch for life-size justice. These strands manage to meet up, loosely, in a primary plot in which the Kingsman agency is trying to stop a lisping telecom mogul named Richmond Valentine (Samuel L. Jackson) from fulfilling his evil-genius plan for a kind of ecological apocalypse via SIM card. There’s a nice (if overlong) finale, and I was happy anytime the dancer Sofia Boutella showed up with spiked and bladed feet as Valentine’s chic henchwoman. After a while, though, it all starts to repeat itself, even Boutella’s high-speed fights.

Egerton is rough and mildly charismatic. For a lot of the movie, he dresses like Samuel Jackson — caps, sweat suits, swagger. In the big black glasses he gets from Kingsman, he looks like Gary Oldman, back when Oldman was one of the most exciting weirdos in the movies. Without them, he looks like a DiCaprio or a Wahlberg. Egerton is Welsh. It’s surely only a matter of time before Hollywood makes him do so many American accents that he will start to seem as body-snatched as this ironically respectable incarnation of Firth does. Firth has aged into dull stiffness. I miss the version of him that seemed to smell garbage even when he wasn’t starring in it. Now everything seems to smell the same.

Jackson is the best thing in the movie. He is given couture streetwear and uses that lisp the way some villains use cats. This is something you want from a star: for him to relish being in a game or a cartoon. Is it weird that this is yet another movie in which the primary heroes are white guys and the deadliest people are brown or female (or both)? Of course it is. But Jackson can usually get you past — or least complicate — a movie’s casual racism. He could be phoning in his performance, but he’s having a very good time instead. He slays without ever having to go into a racist church. 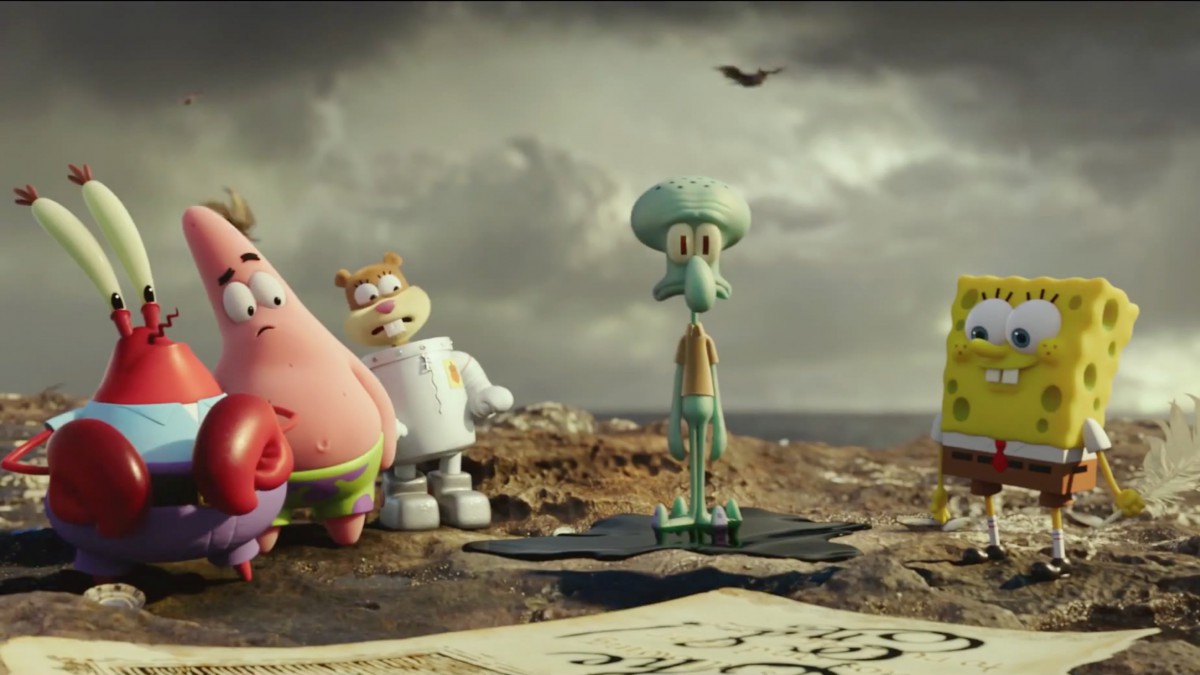 A steady diet of animated American movies gets you acclimated to a certain kind of regulated rambunctiousness. Sometimes I’ll leave a Bolt, a Rio, or a fiasco like The Nut Job wondering why more of these movies aren’t crazier. Part of what made people so happy about The Lego Movie is that, in its way, it got close to out-there. The SpongeBob SquarePants movies go further. The team that’s been doing the SpongeBob show on Nickelodeon has been at it for the better part of a decade. Out-there is now pretty much baked into every frame. This is how you wind up with Sandy, the cartoon squirrel who uses deep-diving gear to live underseas, turning into an actual squirrel in The SpongeBob Movie: Sponge Out of Water, and pretty much staying that way during the climax.

Once again, poor, bellicose Plankton tries to swipe Mr. Krabs’s secret Krabby Patty burger recipe. But the recipe vanishes, which brings riots and dystopia to the organisms of Bikini Bottom. Mr. Krabs believes Plankton is lying when he says he doesn’t have it, but SpongeBob knows Plankton is telling the truth, and the two enemies are more or less banished together until everyone figures out that the recipe is up on dry land, at which point the movie’s animation style switches from a charming, unsophisticated flatness to expensive-looking computer-generated stuff.

Sponge Out of Water is a big improvement over the previous, soggy 2004 film. It has a nutso, druggy quality that makes it feel like it’s up to more than its plot. Having Antonio Banderas play a live-action pirate named Burger Beard is one thing; having him narrate from an ancient storybook in his exuberant Spanish accent is proof of the movie’s arbitrary hilarity. Adults make up 40 percent of the show’s audience, but kids also seem to get the Burger Beard jokes. What’s true of Jackson in Kingsman could quadruple here for Banderas. I’ve never seen an actor work this hard, this embarrassingly, without actually embarrassing himself. The man is an international treasure.

It’s obvious that the people responsible for Sponge Out of Water feel free. They work with pleasing literalism, musicality, and an abundant appetite for throwaway lines and puns. (“Unleash the condiments,” says Mr. Krabs while at war with Plankton. “With relish!” says SpongeBob.) The alacrity is so contagious that even a few of the many fart jokes smell pretty good. I never know what I want from commercial animated entertainment, but I do know that I like being able to suspect that — by the standards of the competition — its makers might be outlaws and lunatics. 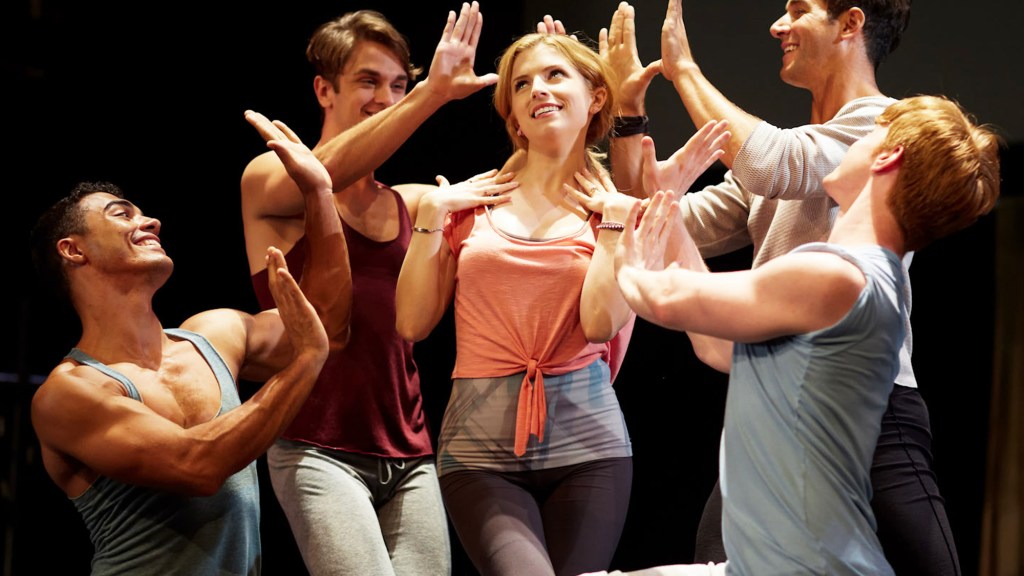 RADiUS/TWC The Last Five Years is a musical drama about Cathy and Jamie, a New York couple that meets, marries, and breaks up after his writing career takes off and her acting career goes in the opposite direction. It’s bland, earnest, and receptive, and in order to capture it, the director Richard LaGravenese thinks he needs more crane shots than Citizen Kane. But Anna Kendrick and Jeremy Jordan play the couple, and, as performers, they make the movie seem fuller than it is. Jordan is a theater actor, and a lot of his singing appears to be on the spot. He’s aggressive, eager, and spontaneous. Kendrick is more tentative, but you sense that it’s because she has put thought into the part. Her voice isn’t big or rich, but she controls it and can act out a song. When she’s not singing in a movie now, you’re almost disappointed.

The Last Five Years is based on a 2001 stage musical, by Jason Robert Brown, whose conceit is that Cathy and Jamie’s songs are duet-less, with one exception, and time is shuffled. LaGravenese’s adaptation puts Cathy and Jamie together a lot, so you notice that his numbers are all about how great life is and hers take up the cause of the unhappy and long-suffering. The gimmick doesn’t work in the film, because the story begins at the end. You know the relationship will never work. But even if it began at the start, you’d know which way things are headed. Standing side by side or in each other’s arms, they sing every which way but together.

‘The Bachelor’: Secret Virgins, Naked People, and the Five-Hour Race to the Fantasy Suites