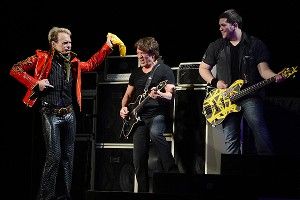 As of yesterday, Van Halen — who reformed earlier this year, for roughly the 10,000,000,000th round, this time with David Lee Roth up front once again — has indefinitely postponed almost the entirety of their summer tour. After their June 26th show in New Orleans, 30 dates across the US have been canceled. Why? Because they hate each other, of course. No, like, actually, that’s why. Rolling Stone (via Vulture): “Nearly all of the tour is promoted by Live Nation, whose reps wouldn’t comment. The band’s rep also had no comment. A source with knowledge of the tour tells Rolling Stone that Van Halen’s members ‘hate each other.’ Adds the source, ‘The band is arguing like mad. They are fighting.'”

Are you upset? Don’t be upset. I’m sorry if you already had tickets to one of these shows, and already had the date circled on your calendar. I’m sorry if you had read up on the early coverage of the band, and about how they actually were sounding pretty kick-ass. (Here’s Chuck Klosterman, on their surprise set at a tiny New York club in January: “The musicianship was muscular and impeccable … Robert Christgau once wrote that ‘this music belongs on an aircraft carrier,’ which he meant as a criticism — but for anyone who loves Van Halen, that reality defines the magnitude of their merit. These guys are hydro-electric destroyers. Watching Eddie Van Halen play guitar is like watching the detonation of a nuclear bomb from inside the warhead.”) I’m sorry if you had convinced yourself that this was it, the real, true, proper Van Halen reunion tour you’d been waiting for. And I’m sorry if you live in a state, like maybe New Mexico, that is usually on the back-end of a conventional tour schedule, and therefore you are always being canceled on when bands implode. I’m sorry if you’re the operator of one of the venues that Van Halen was supposed to play, and if you now have to scramble to return the tickets and fill their slot for the night and make up your losses. I’m sorry for all that.

But this is the way it’s supposed to be. Come on. It’s Van Halen. They hate each other. Still. And so they put together a high-profile reunion, manage to release a new album (mostly built on old stuff), and then call off their tour in a impulsive hissy-fit moment. Isn’t that almost comforting at this point?