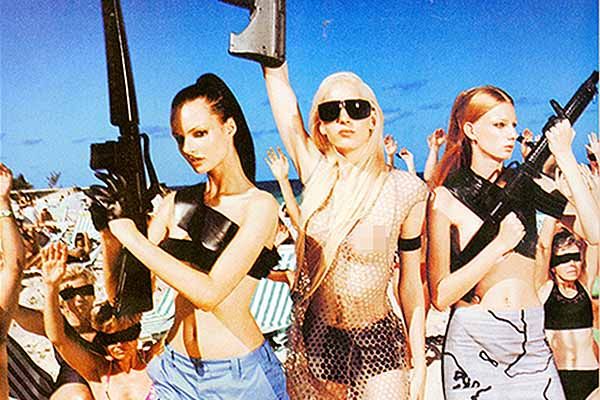 All week I’ve been wringing my hands with anxiety over the Coachella Valley Arts and Music Festival, which I will be attending for the first time in my little Californian life this weekend, and all week people have been telling me to calm down: You’ll have to wait in line to get in for only one hour; it’s actually really freeing to not have a cell phone connection for three days; most types of skin cancer are not malignant; and so on. I was starting to relax a little, enough to actually start thinking about what bands I wanted to see instead of how best to ward off the armies of caftan-clad looky-loos devouring fistfuls of molly out of their Navajo backsatchels. My secret dream was that post-hologram Coachella would be deemed too tech-oriented for scenesters, and everyone would observe strict midnight bedtimes so they could wake up bright and early for their morning jogs before the sun started melting the BPA-free water bottles right out of people’s hands. It would basically be like TED with swamp coolers.

Then I got the invitation. I’d always wished I had been cool enough to be witness to some Zoolander-grade ignorant fashion bullshit, and now my moment had arrived. I RSVP’d within minutes, avoiding the obvious problematic nature of the event, while remaining upfront about my level of enthusiasm. It was about that time that I started seeing the words “Guantanamo Coachella Party” popping up in my Twitter feed, and the incensed blog posts started rolling out. “I can’t believe Smashbox and True Religion would sponser [sic] such a thing,” one disillusioned commenter posted on Refinery29.

It was clear that Coachella’s shark-jumping was not going to result in a chiller, more laid-back weekend, but rather an increasingly aggressive commerce-driven train wreck, much like I’ve heard the Sundance Film Festival has become (another annual hypefest I’ve never attended; I don’t like to leave my neighborhood). But rather than it further intimidating me, I was starting to get excited; a real possibility existed that I was about to journey to the heart of vapid pop-cultural darkness and have the opportunity to stare it in its self-tanned face. Once the initial Twitter furor started to taper off, it was replaced with blanket disgust for Coachella culture at large — wouldn’t it be interesting to be at the site of the first real backlash?

Of course, it was not meant to be. By this morning, both Smashbox and True Religion had dropped out as sponsors. Smashbox issued the following statement yesterday afternoon:

Smashbox Studios agreed to sponsor the pop up photo session portion of Flaunt’s Coachella event not knowing there was a theme beyond it being a “feel good after party” to the music festival. We saw the invitation for the first time this morning, when it was thankfully brought to our attention by our concerned clients. In no way do we condone the artwork or title and have spoken with the magazine who have agreed to a name and artwork change. The theme is now: NIGHTSHIFT. The event has no affiliation with the Coachella Music Festival.

Then the company one-upped itself hours later:

Smashbox Studios will no longer act as a sponsor to Flaunt’s Coachella after party. We were not informed of the inappropriate theme prior to the release of the invitation today. We feel strongly that even with a new event title, the feel good atmosphere of the party has been tainted.

True Religion released a similar statement this morning. Now, regardless of how believable it is that a company would spend thousands of dollars to throw a high-profile party at a high-profile music festival without being fully aware of all its particulars, I was disappointed. Smashbox and True Religion were denying Coachella culture a chance to fall on its face, and denying all of us the fun of watching it. Backtracking now would offend fewer people and perhaps be the smarter thing to do, but it would not result in the same paradigm shift of the original, horrible concept. I still have the invitation, I’m still invited. But now it’s just another party; it doesn’t feel like something I need in my life anymore.

Maybe I’ve grown up a little since yesterday. Maybe we all have.