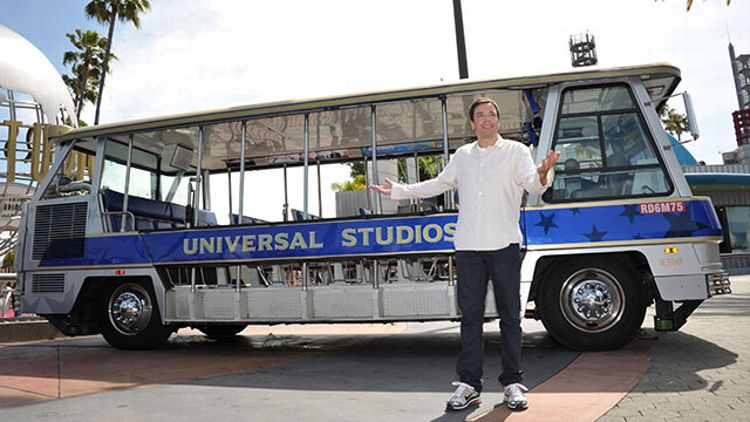 Dreams grow big in Hollywood, but fall as quickly and easily as bowling pins. So it was on Monday afternoon when I decided to give a shot to my childhood fantasy of becoming a Universal Studios tour guide.

The call came Saturday afternoon, when Grantland editor Mark Lisanti forwarded me the announcement for an open casting call for guides. I looked at the information and took a deep breath before informing him that, yes, I would do this. With one caveat, however. This was to be no stunt report. If I got the job — when I got the job — I would kiss the fetid ranks of journalism good-bye forever and go off to fulfill my glamorous destiny: introducing tram-loads of tourists to the wonder of moviemaking.

As a boy and budding film nerd growing up in Los Angeles, the Universal Studios tour was my personal Stork Club. Children of the ’70s, the tour and I grew up together. I am old enough to remember when the attractions on the tram ride consisted of some foam rocks falling into a gully and a guy in a Wolf Man mask running at the bus and growling. As the years marched on, I was thrilled by the addition of the Jaws attack and the Airport ’77 reenactment show, and again as trams drove through the avalanche cage where the Six Million Dollar Man had fought his historic showdown with Bigfoot, and once more with the addition of the breathtaking Battle of Galactica.

As I grew older, I moved on but never forgot, especially as an ever-more-dazzling line of stars — Jimmy Fallon, Jack Wagner, Conan O’Brien, as well as some of the greatest executives entertainment has ever known — emerged from the tour-guide ranks to take Hollywood by storm. Never far away was the memory of the Animal House epilogue, the information that Babs Jansen had become a Universal tour guide. “Ask for Babs,” it said, and I promised myself that someday I would.

I arrived half an hour early for the 2 p.m. call, but the line in front of the VIP Experience Lounge was already several hundreds of hopefuls long. With a mere 40 guide slots at stake, suddenly, my slam-dunk chances seemed less dunkable. Worse still, I noticed, in addition to the résumés we had been asked to bring, nearly everyone on line was waving around head shots. I had assumed that the “open-call audition” language was just in keeping with the magic-of-the-movies theme; but no, apparently Universal meant audition literally. And the perkiness level was alarmingly high. Way above civilian standards. How could I compete with this?

As a massive windstorm broke out, the line crept forward. I shivered with my fellow hopefuls in the vast Universal quad as a trickle of tourists purchased tickets for the tour that a handful of us would someday guide. I checked out the multiethnic group of mostly twentysomethings. Many of the women wore smallish dresses, which they spent the hours ahead struggling to hold down in the wind storm. The men were, to a man, dressed in the modern office-park uniform of black slacks and open-collar dress shirts, often purple. My khakis and non-dress shirt, I quickly calculated, were several factors cooler than these getups. Could I be back in the race?

Another scan of the crowd revealed, however, that in my 40s, I was just about the oldest person around. Looking harder, I saw an elderly African American woman, probably in her mid-70s, and a man who looked like Mark Harmon, if Mark Harmon had been homeless and sleeping in gutters for the the past two decades. On the one hand, bleak company for me in the senior category; but on the other, I wondered if there could be an elderly quota. If these two were my competition, I was a shoo-in.

As the hours passed, I got to know my neighbors. In front of me, two young women discussed pescetarianism — which one practiced and the other was unsure about. They were not, it turned out, actors, but dancers. When pressed what type of dancers, one offered, “You know, YouTube and that kind of stuff.”

Behind me were two young men in dress shirts and slacks. Alex (not his real name) was a native of Puerto Rico and had been in Los Angeles for several years, trying to break into acting but mostly doing “hidden-camera shows.” It was his first time coming out for the guide call, but he had been here to audition for Universal’s Halloween Horror Nights crew, which consisted of screaming in one of three monster characters. He hadn’t gotten the job but had scared a woman in the room “really good.”

Jason (also not his real name) was a clean-cut, aw-shucks Dixie native who bore not a hint of resentment for his three years attending open casting calls found on Craigslist without yet landing a part. Jason pointed out that Whoopi Goldberg had been rejected as a guide. “See,” Alex said, for some reason directing the comment at me, “don’t feel discouraged. If you’re turned down, you can end up doing big things.”

About halfway into the line, we were given forms to supplement our résumés. I filled in my contact info but paused when it came to the line for “Performance or public speaking experience” before writing: “Hosted a podcast.”

A casting call official in white shirt and black tie worked his way down the line and paused to chat with the people in my cluster, advising us that the best plan for the audition was “don’t suck.” His conversational voice, I noticed, was louder than my yelling voice. One of the girls in front of me complimented his shoes, a pair of laceless black sneakers. He asked our section of the line to play the game “guess who my shoes are by.” Remarkably, Jason the country boy won by calling “Aldo.” The official’s perkiness was at a wattage that I could never approach in a thousand lifetimes; I despaired.

I saw my chance, though, when his faux-hawked partner came by to check our papers. I beckoned him. “I was told to ask for Babs,” I winked.

He eyed me nervously. “Babs?”

His confusion and, perhaps, fear didn’t abate. “I don’t know who that is but I can check for you,” he said. I told him to never mind and slunk back into formation.

As the line dragged on, well into our second hour, I noticed with no small degree of pleasure that the general level of perkiness was noticeably flagging. Alex and Jason quietly discussed the price of fame. Jason said, quite convincingly, that he didn’t seek fame, and would be content with the smaller parts so he could still go to Starbucks without being harassed. Alex, less convincingly, agreed that fame distracts an actor from “the craft.”

Trying to keep their spirits up, the girls in front of me practiced their moonwalking to the side of the line.

“Your backward slide is good,” Jason the country boy complemented.

“It’s called moonwalking, yo,” one of the girls answered.

“Backward slide is the technical term. It’s much easier when y’all go in circles.” The girls looked at him, confused, both about the instruction and the innocent face giving it. “It’s about distribution of weight.” Still not getting through, he stepped forward from the line and demonstrated a remarkably proficient, elaborate moonwalk routine. “I did some B-boy,” he shrugged.

After two hours, we entered the VIP Experience Lounge — a dining and conference center in olde-timey country style, decorated with framed photographs of Universal stars Pierce Brosnan and others on the wall. The line snaked up the stairs, out onto a balcony, and into another hall. Then, finally, our moment arrived. We approached the meeting room; at five tables, casting representatives sat receiving the guides of the future. I checked my hair and outfit, cleared my throat. After standing up online for two hours, my throat was parched and my back ached but my heart pumped with excitement; after decades of waiting, my moment of destiny was here at last.

When my turn came, I was beckoned to a round table and a man in his mid-30s with a snidely welcoming look pasted on his face. I sat in the chair in front of him while he glanced at my résumé, listing my wealth of experience writing for some of America’s finest websites and publications. He looked from my face to my résumé and back again and I detected, just in the corner of his eyes, the faintest flutter of incredulity that I was there.

“Soooo,” he said. “Why do you want to be a Universal Studios guide?”

“I love Universal. I love moviemaking … I love guiding.”

He gave me a moment to continue.

“I love giving people tours. Of the city. And things.”

“Uh-huh.” He scanned my résumé and forms further, looking for some glimmer of hope, really, I thought, trying for me. “So what is your podcast about?”

“Culture!” I shot back, reaching for my inner reserves of perkiness or at least loudness.” Cultural affairs! And entertainment, too! We also have discussions!”

“OK … So the way it works is if we are interested in you moving forward to the next round we’ll call you tomorrow at the number you provided, and if you don’t hear from us that’s it. So thanks for coming.”

I stood up. “Thank you!” I stuck out my hand. He stayed seated; his hands stayed at his side.

“Right. OK. Then thank you for having me!” I glanced at the table in front of him and noticed a large bottle of hand sanitizer and many crumpled-up tissues. And with that, the dream of my youth died. And less than two minutes after I had sat down, I was on my way to the rest of my life.

Outside, I caught up with Jason. I asked how his interview/audition had gone. “Great. It was really fun,” he told me. I asked if he would be waiting at home to see if they called tomorrow. “Oh no,” he explained. “You can’t wait around. You’ve got to just go and do it and then just try and get on with life.”

I would if I could.

Richard Rushfield (@richardrushfield) has observed Hollywood for decades and now does so at RushfieldBabylon.com.