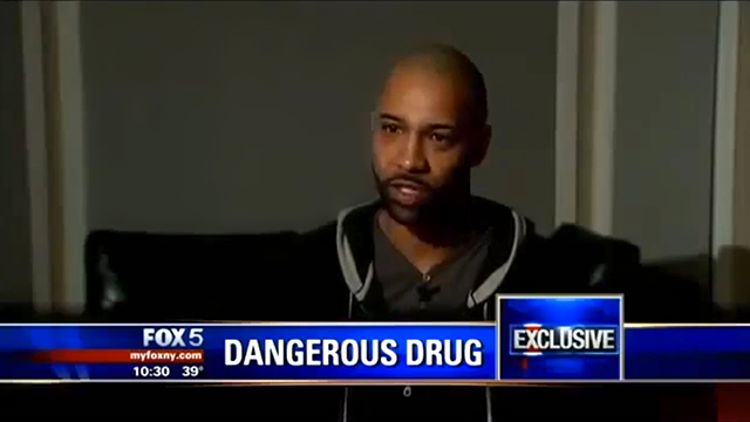 Earlier this month, the rapper Joe Budden — he’s a “star” of VH1’s Love & Hip Hop, but you probably still know him best for “Pump It Up” — went on local New York affiliate Fox 5 News to bravely tell his story. See, all summer he’d been experimenting with Molly, and Molly almost killed him dead. “I didn’t see a problem with the fact that maybe five days would go by without sleeping,” Budden told gravely concerned reporter Lisa Evers, while the two reclined on a plush couch in his New Jersey home. “I didn’t see a problem with the fact that maybe I was hallucinating at times.” He managed, just barely, to fight it off, Evers told us grimly, with the help of people who loved him, and he hopes his plight will send the message to the world: “Popping a Molly can make you feel happy and sexy. But experts warn that just one dose can mess up your brain for life.” Then she plugged his new album.

I’m not trying to take the piss out of Budden’s, or anyone’s, legitimate substance abuse issues. But this, at least as packaged, is something else. The ominous allusions, the scarred survivor story, the aggressively substance-free reporting — this is a bit of Drug Trend Paranoia 101.

At pretty much any given time in America, there’s a reigning Drug Trend Paranoia. Most recently, our nation was struck by the terror of bath salts — but that one kind of got muffled when it turned out that the guy who ate that other guy’s face was just high on regular-ass weed. Before that, for a minute, there was something called K2 fake weed, but I’m pretty sure the only ones trying to make that particular Drug Trend Paranoia pop off were the producers and purveyors of K2 fake weed. And before that we had Four Loko, which was actually a totally legitimate Drug Trend Paranoia without technically being drugs. (Then again: have you had original recipe Four Loko?)

And the whole time, right in front of our noses, was Molly. It wasn’t dangerous, at first: for actual young people, it was what you did when you went to see Skrillex; for the rest of us it was a cheap and easy shorthand for “youth culture” (I’ve probably made some version of the blah blah blah “young people” blah blah blah “too busy popping mollies to do their geography homework” reference dozens of times on this very site alone). Seeing as it was purportedly MDMA, a pure version of Ecstasy, it actually seemed way safer than the whip-it-chuggin’ and turpentine-huffin’ these crazy kids would be doing otherwise.

Now, a couple of questions: Does the fact that local news is getting in the game — via Joe Budden a.k.a. Rap Game Surgeon General’s Warning — mean Molly paranoia is about to belatedly rise? And if so, would that have anything to do with hip hop’s reappropriation of the drug from EDM?

That rap stole Molly from EDM is noteworthy enough on its own. How often does a branded substance switch music genre affiliations? But how it happened isn’t all that complicated. EDM DJs don’t get to talk about the shit that they’re doing, because they are DJs. Rappers, though — talking about the shit that they’re doing is like their whole thing. Hip hop wanted Molly, so it took it. And it’s not like kids aren’t tripping balls at Skrillex shows anymore; Molly’s probably safely embedded as the electro festival opiate of choice for years to come. But at some point, roughly mid-2012, hip hop started making the louder Molly racket in public.

On Blue Dream & Lean, Three 6 Mafia’s Juicy J re-emerged solo, as a human garbage disposal gobbling up anything and everything: “Smokin’ weed from the bong / and the lean got me sprung / Molly in my veins got my heart beatin’ like a drum.” But dude’s tastes in illicitness were catholic — you might be able to say no to ratchet pussy; Juicy J can’t — and therefore his sponsorship less effective. Kanye namechecking some nice lady “gone off that Molly” on “Mercy” was bigger for the movement. And then Trinidad James came along and most beautifully sounded the clarion call. It can be argued that the man’s entire career pivoted on his delivery of the words “popped a Molly, I’m sweatin’, whoo.”

Now, it’d be irresponsible to suggest that all Drug Trend Paranoia for Molly started with hip hop’s embrace. The first big flash point came, actually, with Madonna. In March, plugging her new album — titled, um, MDNA — she showed up at the Ultra Music Festival to introduce Avicii, and shouted, “How many people in this crowd have seen Molly?” After that a little beef, between her and EDM’s self-appointed schoolmarm Deadmau5, popped off: he was chagrined the cultural tourist would be pushing Molly on innocent tweens, all of them surely waiting to get fucked up until Madonna told them what drugs to do; she was shocked he thought she was talking about drugs, and apologized via Minnie Mouse.

By August, CNN was namechecking the incident in a story ingeniously headlined “There’s Something (Potentially Dangerous) About Molly.” (I mean, seriously: Pulitzer, to that headline writer, now.) Taking us deep into the dark heart of Molly culture, CNN pulled back the curtains on people … swaying:

“Have you heard of Molly?” the girl next to me asked. She was swaying from side to side, bobbing her head to the bass vibrating throughout the sold-out venue … There was less than an hour until showtime, and I was about to see one of my favorite artists, so I was feeling pretty good. The girl next to me, Jessica, was obviously feeling better.

I turned to my fellow concertgoers, watching as they met Jessica’s eyes, nodding their heads knowingly. Of course they had heard of Molly.

Turns out, Molly is a pretty popular lady these days.

(For added impact, imagine the above line, between “Molly is a” and “pretty popular lady,” with a sharp drag on the last cigarette from a rumpled soft pack of Lucky Strikes )

Later in the piece, CNN admits that “For now, the DEA is more focused on fighting the abuse of prescription medications such as Oxycontin and Valium,” and then gets professional smart person, Columbia professor Carl Hart, to tell it not how it is, but how it should be: “What we’ve done and what we consistently do is we include people that exaggerate the harms. Kids are not listening because they’ve already had the experience. … They (think they) should reject everything we’re saying because we’re not being accurate, and they know it.” But nevermind all that! Molly! Drugs! Scaaaaaary!

By the end of the year, post Trinidad James, it was rap and Molly, hand in hand: In December MTV reported on “Molly, Hip-Hop’s Latest Drug Trend,” trying to parse out exactly the kind of dangers the culture was dealing with. Which opened the door for a savior to rise, in the form of Joe Budden, Lisa Evers, and the Fox 5 News team. Maybe it’ll be easier to demonize Molly now that rough-and-tough hip hop is into it. Maybe it’ll be easier just because there’s a critical mass of famous people shouting it out. Either way, the seal has been broken on Molly’s histrionic local news reports. Let’s see what comes down the pipeline next.

For now, as to truth versus perception on Molly’s nefarious spread — leave it to Juicy J, as always, to be the voice of reason: “Back then, some people were just keeping it on the low and doin’ it how they want to do it. This year everybody’s like, ‘Fuck that shit, yeah I’m on Molly.'”