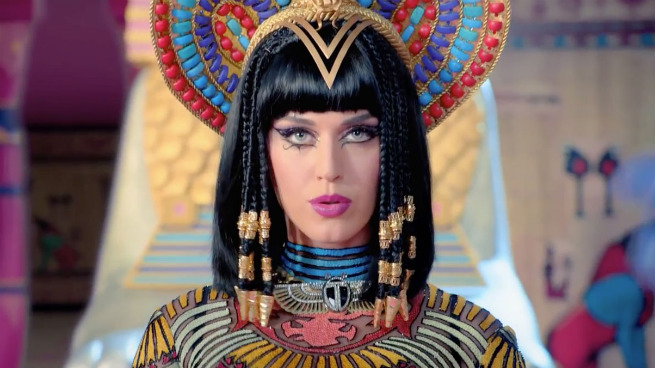 Long ago, there was a time when “Dark Horse” seemed like a glimmering highlight on Katy Perry’s otherwise incredibly safe fourth (if you’re counting 2001’s past-life release Katy Hudson) album. It was the one track that didn’t just feel like a post-divorce Teenage Dream retread, all that fun-loving Katy Perry pop you love, now with more caution. But now that the non-single tracks from Prism have melted away in the consciousness of everyone but die-hard KatyKats, “Dark Horse” has superseded its album’s profile, and the amount of time we’ve had with it has not exactly done it any favors.

“Dark Horse” is in many ways a quintessential Overplayed Song, because its repeated exposure both in airplay and in increasingly kitchen-sinked televised performances has given us far more opportunities to overthink it than it probably warrants or supports. Observing the process will change it, as will playing it every five minutes. With every new listen, you find a new piece of clunky songwriting or phrasing, something freshly ridiculous about Juicy J’s PG rap verse, even if you’re not particularly looking for it. There are stages, of course: On the first 10 listens, you’re just glad J’s verse is better than Kanye’s “E.T.” verse and wondering how many millions of dollars it takes to make it worth it for hip-hop artists to guest on Katy Perry tracks. On listens 11-38, you’re realizing “dark horse” might not be a metaphor, and that Katy might actually just be singing about how she’s like a dark-colored horse. On listens 39-110, “[she] turned the bedroom into a fair” emerges as the high point of the track.

The song is strangely legal in nature — part contract (“Once you’re mine, there’s no going back”), part release form (“You should know what you’re falling for”). It’s kind of like if “Poor Unfortunate Souls” from The Little Mermaid were a love song; it’s definitely a supervillain song. But despite this and its car-rumbling bass floor, “Dark Horse” is as weightless as one of those levitating birds Katy talks about. Katy’s always leaned toward songs built off similes and metaphors (baby, you’re a firework; boy, you’re an alien; you make me feel like I’m living a teenage dream), but here they’re mixed up so willy-nilly that the song loses all lyrical coherence.

This must have made it difficult to decide on a theme for the video, as was probably not the case with lead Prism single “Roar.” (Roar! Animals! Jungle!) Do we go equestrian? Do some sort of Craft thing off of the “play with magic” part? Nautical, vis-à-vis “a perfect storm”? The neon Egyptian theme that ended up in the clip is fun, but like the song, becomes too silly for its own good. “Dark Horse” wants to be sexy-scary, but it’s not a vibe Katy can sustain for too long before breaking out the Flamin’ Hot Cheetos, inviting Boo for a cameo, or otherwise breaking character. And I don’t think it’s a vibe she particularly wants to pull off. Katy does love-struck and blissed-out better than anybody, but “difficult lover” is a harder character for her to play, which has as much to do with the persona she’s built for herself as how we’ve gotten used to processing it. “Dark Horse” is a thin stage façade. If you lean-dance too close to it, you’re likely to tear it down.

Final verdict: Light as a feather, stiff as a board