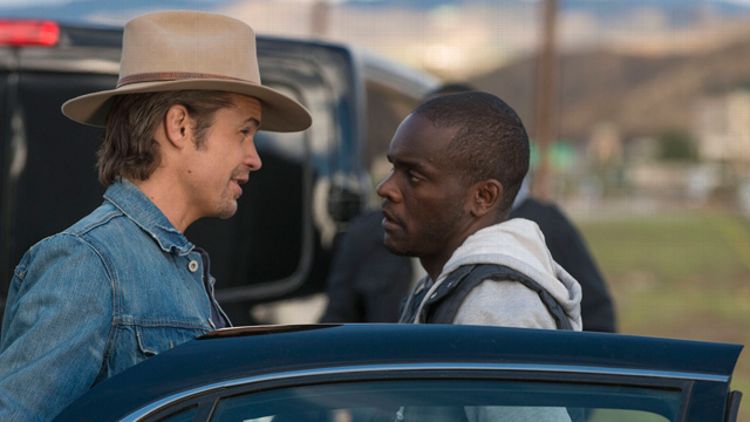 It’s been a long time since Raylan Givens killed anyone. In fact, I was racking my brain trying to figure out the last time he unloaded his gun into a suspect and drawing a blank. I’m pretty sure he’s resorted to nonviolent means for most of this season, so that puts us back to Season 3, when my memory gets a little fuzzy. If you’ll recall, when this show began, one of its conceits was that Raylan Givens was the Old West lawman transplanted to modern-day Kentucky. The gunslinger was going to have to modify his ways to fit into the modern-day world, and one of the major conflicts seemed like it would be the Western trope of shooting first and asking questions later, juxtaposed with the “realities” of contemporary law enforcement. (I use the quotes because obviously Justified takes place in a very heightened reality.)

Yet after the first season, the show gradually retreated from that idea. I’m sure it’s been intentional in a lot of ways. The series has gotten better the more it’s turned its focus onto its setting and the colorful characters who inhabit it, and Raylan has become a better character the more he’s forced into unlikely, uneasy alliances, sometimes with the very criminals he has to put behind bars. But I also like to think that has come with an intentional bit of subtext. One of the undercurrents of the series is how Raylan Givens grows up a little, stops being such a hothead, and starts accepting that he doesn’t have to solve every problem in the world. In this fourth season, in which we’ve seen him open up even more than usual to people around him, it would only make sense that he’d be more reluctant to pull the trigger. There are all sorts of people to banter with in Harlan, but you can’t banter once you’ve shot them.

“Money Trap” is one of the season’s lesser episodes, but I ended up quite liking the main plot after not being entirely sure where it was going at first or why I should be invested in it. In particular, the plot incorporates the character of Jackie Nevada, the last left-over bit of story from Elmore Leonard’s Raylan, a full-length novel about the Raylan Givens character that was inspired by Justified, which was in turn based on his original fiction. (Other characters from the show pop up in the book, but they’re put through the inimitable Leonard filter.) Raylan isn’t one of Leonard’s finest works, but it’s an enjoyable novel, for the most part, and the pieces the series has pillaged so far — like last season’s kidney-theft subplot or the Bennett boys of Season 2 (though they appear only very briefly in the novel) — have mostly been very fun.

Jackie Nevada, on the other hand, feels sort of like an afterthought in the book, which is already mostly a collection of loosely strung together short stories with Raylan as the common thread. She has roughly the same back-story and motivations in this episode as she does in the book, though the book makes it much more explicit that she and Raylan hook up. (Yes, even more explicit than her stripping down and getting into the shower while he’s in the room.) She feels sort of like a fantasy figure, a hot-to-trot college student who pops up in the middle of another investigation, then becomes a kind of junior partner to our hero. As played by Shelley Hennig, who was one of the few fun things about the mostly dire The Secret Circle, I kind of enjoyed Jackie in spite of myself, but I still wondered if she was one element too many in an already overstuffed episode.

Raylan comes upon Jackie because he’s going after Jody, the fugitive he ran down then stuck in his trunk back in the season premiere. (As it turns out, it’s been just six days in the show’s timeline since the events of that episode, which is sort of hilarious if you think about it long enough.) Jody managed to escape with the help of a wannabe filmmaker named Kenneth Blanks, played by Michael Gladis. (That’s right, Paul Kinsey.) Anyway, the idea of Raylan tracking down the same guy all over again isn’t all that interesting at first, but it takes on a kind of sad certainty as the hour goes along. This guy’s a legend in his own mind, and he truly believes he’s going to be the one to gun down Raylan. But we’ve followed this show for three and a half seasons. We know where this is headed. And, of course, Raylan shoots Jody through the chest, and that’s the end of him. (Who makes off with the money that kept Jody hanging around Harlan? Why, Jackie, of course, though Raylan tries to lay a guilt trip on her about giving it back to Jody’s ex-wife and kids.)

This is very pointedly a bit of a break from the Drew Thompson plot for Raylan, but I do like that both he and Boyd start out the episode thinking, “Hey, I’ll do this one quick thing, then get back to hunting for Drew,” and instead find themselves trapped in far more complicated situations. On Boyd’s end, the trip up to the swingers party ends up being an opportunity for some of America’s finest character actors (including Sam Anderson, Bernard from Lost, among a million other credits) to pull him aside and tell him that he’s killing a guy for them, because they owned his daddy, and they’re going to own Boyd, too. It’s not the most promising beginning for a story, but I liked that Walton Goggins gave Boyd a spare, haunted look as he realized just how hard it was going to be for him to overcome the years of prejudice he faced because of his family name. That idea of a Crowder being just as good as anybody else floated last episode seems like more of a pipe dream than ever. (Then again, if I’m betting on anybody on this show, I’m betting on Boyd. He’ll be back.)

Ava’s end of this plot is, sadly, a bit less interesting. There’s a scene where someone pulls her aside and pretty much just tells her that, hey, women have all the power, and maybe she should do something with hers, but it really feels like the show doing its level best to make what’s been Ava’s subtext for a while now into text, for those of us who weren’t quite following along. Couple this with the absence of Rachel and the general “male wish-fulfillment” aspect of Jackie Nevada, and you don’t have the best week for the show’s women. Now, granted, Justified is a pretty male-centric show, and that’s fine. But I’ve always liked that the women in its orbit are tough and capable, without the show drawing too much attention to that fact or spelling it out for the audience. This episode was a letdown in that regard.

On the other hand, we can always count on the complicated web of relationships that exist between Raylan, Boyd, and the father figures in their lives. Even though Art’s barely in this installment, he offers a vivid reminder of why his little catch-ups with Raylan are often the best things in any given episode. His talks with his most irascible employee at the show’s start (when he tries to get Raylan to go talk to Arlo, all the better to figure out what’s up with Drew, though he almost pitches it as a family bonding opportunity) and at its end (when he chuckles about the Jackie situation) are indeed compelling. But the real meat, as always, comes from Raylan meeting with his actual father in an attempt to get him to open up about Drew, only to mostly abandon that plan immediately. Blood is thicker than water on Justified, but that blood also tends to be filled with heavy pollutants.

Todd VanDerWerff is the TV editor of The A.V. Club. His writing has also appeared at Hitfix.com, the Los Angeles Times, and the House Next Door.