FX’s New, Ultraviolent ‘The Bastard Executioner’ Will Make You Want to Lop Off Your Own Head 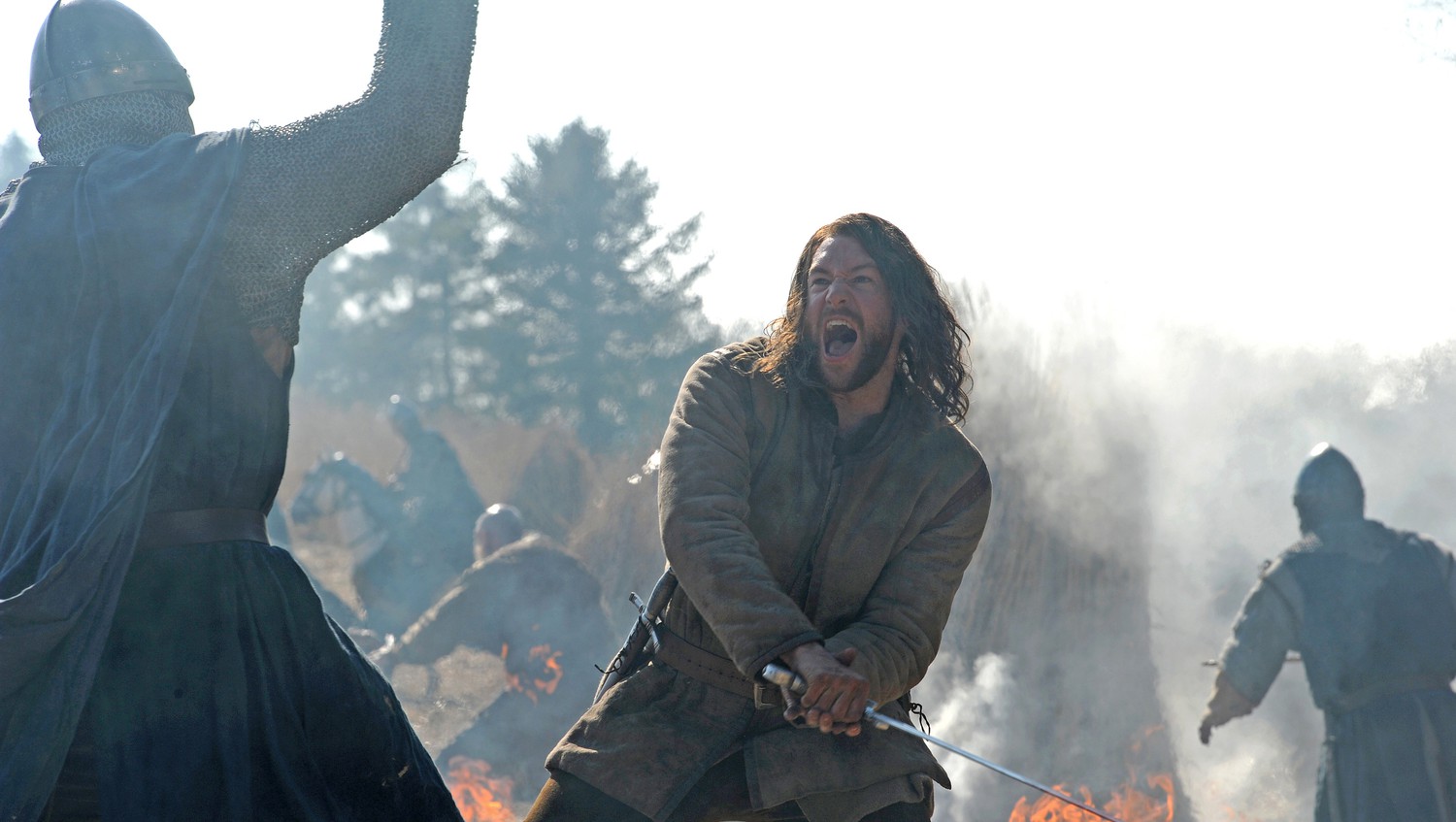 Judging by recent history — anecdotal and otherwise — I am something of an anomaly among my critical peers, because Kurt Sutter has never called me a cunt. Over the course of his six years spent riding high on the hog with Sons of Anarchy, Sutter gained a reputation as the most pugnacious of high-profile showrunners, quick to defend his work from insults, perceived or otherwise, with a flurry of his own. Watching him lash out, quasi-apologize, then double down and fight again has been both terrifying and instructive — an occasionally necessary reminder that the people making television are often far more sensitive than the tortured souls they create onscreen.

The fact that I’ve managed to avoid Sutter’s wrath doesn’t make me special or a fan. What it makes me is ignorant. I’ve never seen a moment of Sons of Anarchy, not the early seasons when (I’m told) it achieved a rare and potent blend of quasi-Shakespearean grandeur and down-and-dirty pulp, nor the later seasons when (again, I’m told) a character played by Sutter bit off his own tongue. This is a significant gap in my television knowledge and I don’t confess it out of any pride. Actually, it’s the opposite. When I took over the TV beat full-time in 2011, Sons was about to launch its fourth season. At the time, this felt like an impossible number of episodes to catch up on — how naive I was! — and, since we’re being honest, the hyper-violent travails of an outlaw biker gang didn’t sound like my thing. And so I was content to let Sutter’s crazy train motor right on by.

This ignorance is nothing to brag about, but it does offer me a unique opportunity. I am able to approach The Bastard Executioner, Sutter’s new drama, which debuts Tuesday night at 10 p.m. ET on FX, from a uniquely pure perspective. Unlike just about every other human involved in the television business, I have no deeply ingrained opinions of either the man or his work. I hold no grudges. I carry no expectations. Indeed, I am as innocent and freshly scrubbed as Elen Rhys’s Petra, a Welsh peasant and the beatifically pregnant wife of the show’s titular executioner. That, at the end of the two-hour premiere, she and I ended up in about the same degraded state speaks volumes about my first visit to Sutterland. I’m not entirely surprised that The Bastard Executioner isn’t for me. After enduring three hours of it, the bigger question is: Who, exactly, is this show for?

Before we get into that, let’s take a step back and set the scene. Executioner trades the open, American highways of Sons of Anarchy for the dung-smeared trails and barley farms of 14th-century Wales. Baron Ventris, a cruel English potentate played with smugness and steel by Brían F. O’Byrne, is crushing his subjects with high taxes. Milus Corbett, his conniving right-hand man, played by True Blood‘s Stephen Moyer, would love nothing more than to crush them in a more literal fashion. The locals, as they say, are restless. As I’m quickly learning, “restless,” in a Kurt Sutter production, tends to mean “donning black hoods and slitting the throats of their oppressors.” But on one particular barley farm, Wilkin Brattle (Lee Jones) appears content to leave the fighting to others. This is thanks to some rough personal history: The series opens with violent scenes of Wilkin’s past, when he was a vicious soldier in the English army. An angelic vision convinced him to trade his sword for ploughshares, and now he’s happily settled with the aforementioned Petra. The two canoodle and scamper in golden light the way only the truly besotted and/or the truly doomed can. 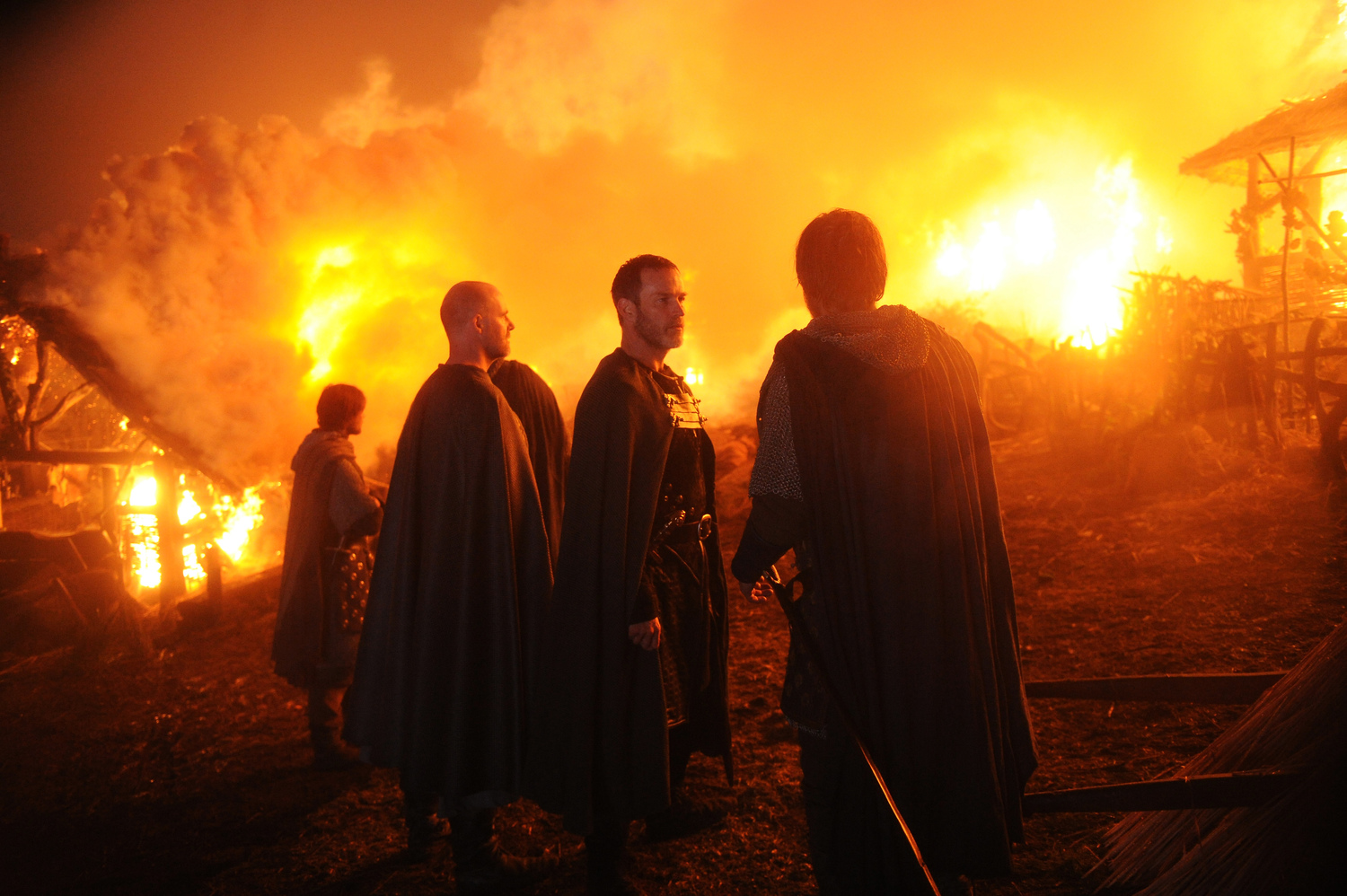 Of course, Wilkin isn’t just a changed man — he’s also a good one. So when his neighborhood pals (including characters played by ace English actors Sam Spruell and Danny Sapani) suggest saddling up for a message-sending raid on the taxman, Wilkin agrees to ride along for moral support. This all goes about as well as you might imagine. I’ll save you the ugly details — though, rest assured, Sutter does not. Suffice it to say, when the smoke clears and the veins stop gushing, our man Wilkin ends up undercover within the local English outpost, tasked with dispensing the rough justice of a king he neither serves nor supports. In the backroom palace intrigue — not to mention the abundance of lusty rutting — there are traces of Game of Thrones. In the savagery and politics of a violent realm, there are whiffs of Braveheart and Robin Hood. And in the crazy performances of Katey Sagal (Sutter’s real-life wife) and Sutter, who play a tattooed Slavic witch and her mute, severely burned bodyguard, respectively, there is a full blast of not-unwelcome WTF. (One that put me in mind of another beloved historical revolutionary: Ferris Bueller.)

Sutter clearly relishes the filth and depravity of his chosen setting. The opening hour alone features men being flayed alive, children being knifed to death, and repeated jokes about sheep buggery. O’Byrne’s villainy is affirmed not through his actions in combat but rather those in the commode: Director Paris Barclay’s camera lingers lovingly on both O’Byrne’s scatological grunts and upon the unlucky towel a Welsh servant uses to scrub O’Byrne’s royal backside. With a title like The Bastard Executioner, I was prepared for heads to be severed, but seeing them run through, like a martini olive with a toothpick, was a surprise. Is it any wonder that the prevailing aroma wafting off of The Bastard Executioner is gangrenous and rotten?

These gory flourishes — and the enthusiasm with which they’re presented, each hack marked with a corresponding slash of electric guitars and a tumble of tribal drums — were enough to send me packing. And that’s OK. I’m generally squeamish about bloody kid-murder, and there are plenty of other shows on the air able to explore the contents of skulls without providing literal evidence in the process. Besides, these three hours were enough to recognize Sutter’s skill as both a provocateur and, oddly, as a bleeding heart romantic: There’s clearly something to his furious vision of a world suffused with celestial love but ruined by mortal barbarity, his willingness to play fast and loose with ideas both pop and primal. For someone like Sutter, who has wrestled so publicly and so noisily with his demons, the allure of a world in which demons are both literal and slayable is understandable and compelling. His storytelling has guts, in all senses of the term.

But what The Bastard Executioner appears to lack, at least for now, is a pulse. The pilot is frontloaded with adrenaline and horror in order to test viewers’ mettle — a test I clearly failed — but also, perhaps, to distract them. Once you move beyond the terrible poles of murder and mercy, there simply isn’t very much here to savor. It doesn’t help that Jones is a wan performer, but I’m not sure if anyone could raise Wilkin above the level of noble cipher. (Matthew Rhys, on loan from my beloved The Americans, eats Jones’s breakfast, lunch, and elevenses in his few scenes as a beardy, Welsh brigand.) Freed of his fangs, Moyer appears eager to sink his teeth into a villainous role, and Flora Spencer-Longhurst is sufficiently regal as a sympathetic baroness. Yet these are stars yoked into a rough and generally unpersuasive orbit. Outside of an abundance of violence — and, yes, sheep — I remain unconvinced as to the merits of 14th-century Wales as a dramatic destination. (Sutter and his willing actors do their best, but lines like “To what end does this devilry serve?” are always going to be tough sells, doubly so in the buyer’s market that is contemporary TV.) I understand that life back then was brutish and short, but surely not all of the people were, as well? Like its nefarious Englishmen, The Bastard Executioner holds a sharp blade to our necks to demand respect. So far, though, it does little else to earn it.