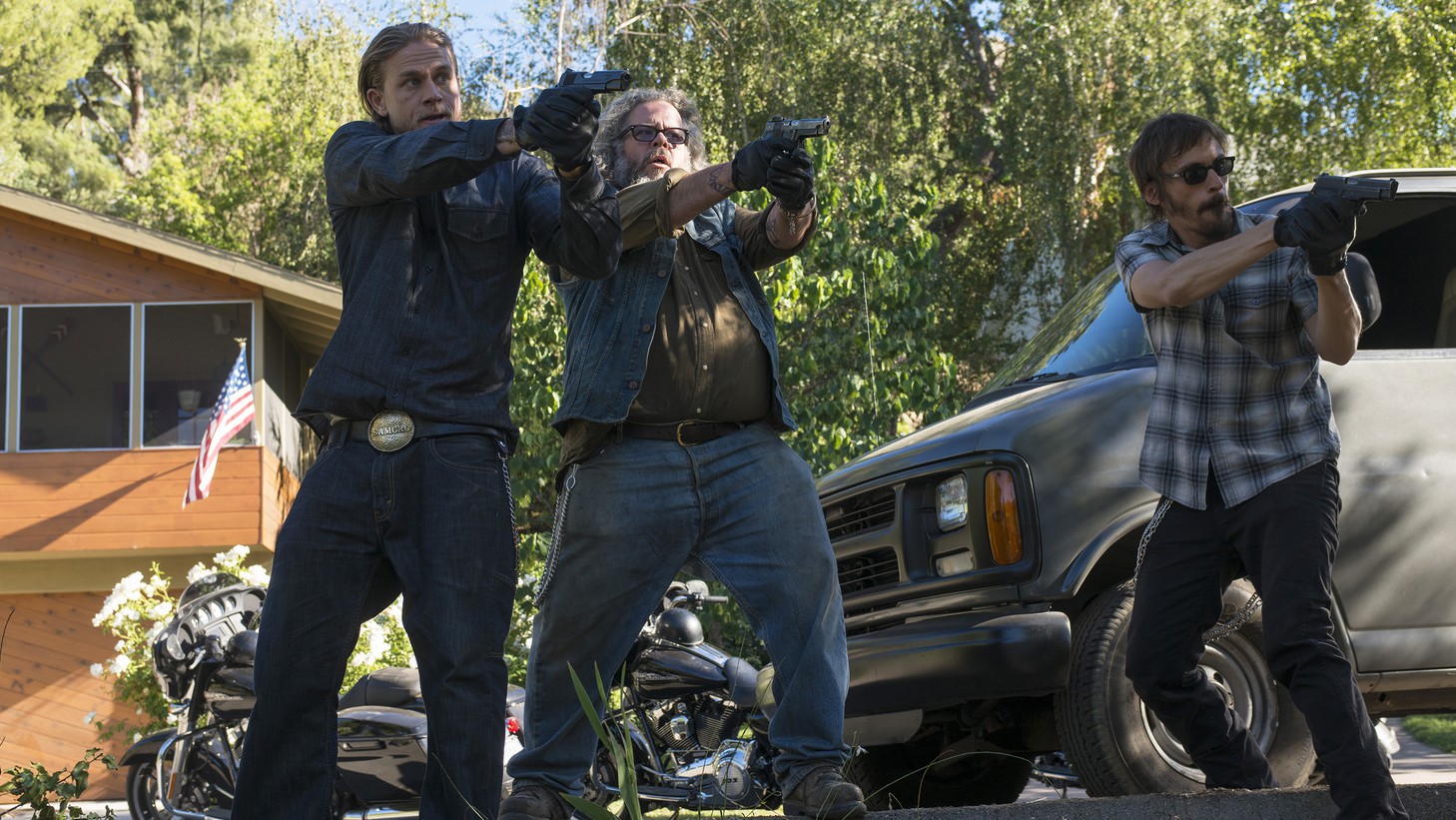 Sons of Anarchy is a television show. It’s on FX. Let me tell you a little about it. I’ll start with the part where a guy bites his own tongue off:

There’s a scene in the last episode of Season 5 of Sons of Anarchy where a guy bites his own tongue off. He does so because he wants to let the police know he won’t be giving up any information about the Sons of Anarchy, the motorcycle gang to which he belongs and whose members the show revolves around. After he bites it off, he throws it at the one-way mirror window in the interrogation room in which he’s being held (which doesn’t make much sense to me) and then he starts crying (which makes more sense).

On Tuesday night, Sons of Anarchy will air its final episode. I’m sad, and if you are not sad, you should be. It is a wonderful show, and does a very good job of balancing all of the ridiculously violent things that happen in it with enough tension and plot twists to keep it from becoming a chore. (Nearly every season ends with a string of events being tied together perfectly into a big, beautiful master plan that’d been laid out right under your dumb face; it’s a play that never gets old, and two of the season finales rival the complexities of Breaking Bad’s masterfully choreographed mayhem.)

I don’t want to write about all six seasons of Sons of Anarchy that have aired, or even about the episodes of the seventh season that have already run. That seems silly. If you’ve watched all of everything, then you know all of everything that’s happened and you probably also read all the reviews that were written as the show was unspooling itself these last six years, as I did. If you’ve not watched the show, it’s because you simply aren’t interested. That’s OK, but it’s also very tragic because it truly is a fun universe to know about for an hour a week or whatever.

So instead there’s this thing:

That’s the Sons of Anarchy: Kill History chart. Everybody likes to look at a chart.

This one shows all of the murders committed by the members of Sons of Anarchy and the season and episode in which each took place. A gun icon means the death was caused by shooting, a knife means stabbing (or, in the case of the third episode of the first season, castration, which then led to bleeding out), a car means running over someone, a bomb means an explosion, a hand means choking, a bathtub means drowning, a pillow means suffocation, and a window means thrown through a plate glass window and impaled with glass. If an item is red, that means it was a murder of true importance, either to the show’s story line or its general nature. If an item is gray, that means it was an ordinary murder of someone not that super-essential. And if there is a block of black items, that means those murders all occurred during the same event, like an explosion or a shootout.

If a person was murdered by someone who isn’t/wasn’t in the Sons of Anarchy Motorcycle Club, then it wasn’t included here, even if the person being murdered was a member. So, for example, Opie Winston, the show’s most tragic figure and the second-most well-acted role, was killed in prison by some nobodies. His murder isn’t on here. The only murder committed by a non-SOA member was Gemma Teller’s murder of Tara Knowles, partly because Gemma was a vital member of the show for all of its seasons and because she always knew more about the inner workings of the Sons of Anarchy than anyone else, but also because that was just oh my god, oh my god, oh my god.