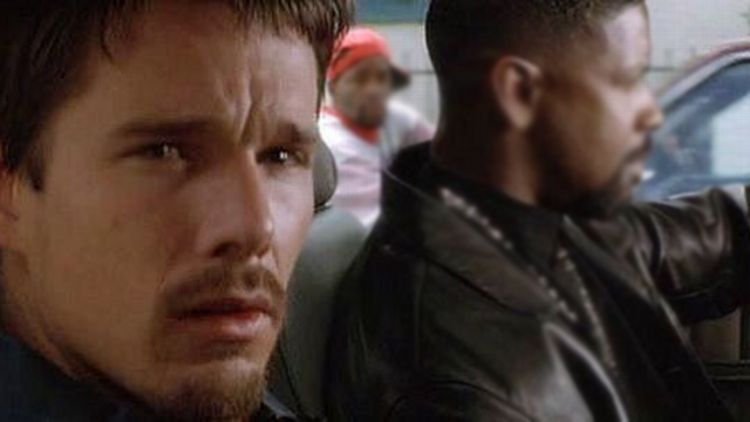 Close your eyes. Actually, don’t — keep reading. But “close your eyes.” Closed? OK, now think of Ethan Hawke. What do you see? Distressed jeans? Weirdly buttoned or oddly tucked shirt? Tattered copy of Slaughterhouse Five in the back pocket? Goatee? Do you hear Soul Asylum playing in the background? Is Winona Ryder staring at him with big, watery eyes? Is Julie Delpy making a false start to touch his perfectly greasy hair? He may do mean things, and he may hurt you, and he may run away without your permission, and you may hate him forever, and he knows that scares the living shit outta you because you know he’s the only real thing you got.

That’s one way of looking at him. Thespian-bard prince of the coffee shop, drinking fair trade, telling you what books mean, and singing about nothing.

The first Ethan Hawke is the generational icon who starred in Reality Bites and Before Sunrise, directed his own bohemian rhapsodies (The Hottest State and Chelsea Walls), starred in experimental art films like Tape and Waking Life, and has gone out of his way to let us know he’s an ACT-OR (Jon Lovitz pronunciation) — doing Shakespeare onscreen, and Stoppard and Chekhov in the theater.

Make no mistake, I like this Ethan Hawke. I, like any 35-year-old, liberal-arts-educated white man, am this Ethan Hawke. Ethan Hawke is the Prometheus engineer of Park Slope hipster dads. In my early 20s, I wanted to be like Jesse in Before Sunrise, though I was probably a lot more like Troy from Reality Bites. You start out wanting to be a romantic, and you end up being a pain in the ass. That’s pretty much the late ’90s.

Like I said, I liked, and still (somewhat begrudgingly) like, that Ethan Hawke. I really love Ethan Hawke the working actor and secret movie star. And it’s the combination of the two that I want to talk to you about, with one single goal: to convince you that Ethan Hawke is underrated.

In truth, while it serves the purposes of this piece, viewing Ethan Hawke in this art vs. pop binary is kind of misleading. If you read this absolutely wonderful AMA Hawke did on Reddit, you can see how little use the actor himself has for that divide.

Here’s the thing: Because I associate Hawke so strongly with the mid-’90s, I tend to think of him the way I thought of movies and music back then. You have to remember that “selling out” and “being independent” and “having principles that you didn’t want compromised by corporations” were still ideas that people actually talked about and took seriously. Some artists navigated that divide well (Sonic Youth, Pearl Jam, Quentin Tarantino), some didn’t (Jawbreaker). The idea of doing one for you and one for them might have been useful a while ago, but looking over Hawke’s credits, and reading what he has to say about his work, it’s clearly not how he looks at it. He has his reasons for the choices he makes, and those choices, while not always commercially or artistically successful, are always pretty interesting.

With the release of and (richly deserved) near-unanimous praise for Before Midnight, the third installment of his long-running relationship saga, made in collaboration with director Richard Linklater and co-star Delpy, Hawke is back in the moviegoing consciousness. Midnight is great. Like, best-movie-of-the-year-so-far great. It’s a beautifully detailed, flawlessly acted, gorgeously shot film about love in a time of midlife crisis. But that’s not why I’m writing about Hawke.

Ethan Hawke is in another movie that’s coming out this week, called The Purge, in which he and Cersei from Game of Thrones wall themselves inside their house on a night when everyone can commit government-sanctioned murder, and dudes in masks try to stab their way into that house. I am basically lighting myself on fire to see this movie on Friday. But that’s not why I’m writing about him, either. I’m writing about him because I can’t think of anyone else who could carry both of these kinds of movies, have them open pretty much at the same time, and have me excited about both of them in so many different ways.

And the crazy thing? He’s kind of been doing this for 20 years. While you were sleeping, Ethan Hawke has been dreaming up a career where artistically challenging material mingles with entertainment, with the results varying from cool to Oscar-caliber. Let’s take a look at some of the weird turns this guy’s filmography has taken.

Hawke was born in Austin, and started acting as a teenager. Whether he had preternaturally good taste or his parents knew how to pick ’em, Hawke distinguished himself as a child actor by not only being really good, but by picking solid material. The Explorers is an awesome, sub-Goonies sci-fi flick directed by Joe Dante, about a group of kids who build their own spaceship called the “Thunder Road.” It features a really delightful River Phoenix, and in the main role Hawke already does the sheepish, sensitive hero bit really well.

This sheepish sensitivity, this ability to show just how overwhelming ordinary life can be, is basically Hawke’s bread and butter. He does this really well in Dead Poets Society. I love that movie, but I just so happen to prefer when Hawke does the same sheepish, vulnerable thing in movies about how overwhelming not-so-ordinary life can be — hence my appreciation for Alive and A Midnight Clear. The former, while gross, is a fantastic survival-adventure tale, features an out-of-this-world Malkovich cameo, and somehow makes its grotesque subject matter inspiring. A Midnight Clear, directed by Keith Gordon, is one of my favorite war/antiwar films ever made. Stuck in an abandoned French country house in the winter of ’44, a small squad of soldiers has a beautiful and brutal experience. Hawke grounds it all; he has the least-flashy part, but he’s totally relatable throughout. It’s one of my favorite of his performances.

None of these movies is particularly great, or even all that good. But you can tell Hawke thought they all had the potential to be so. Gattaca was a big deal when it was announced; director Andrew Niccol was a hotshot screenwriter who had sold The Truman Show for a bunch of money. The movie is about a future where your class is determined by how perfect your DNA is. It shoots for the moon, or at least the Philip K. Dick, and just comes off really cold. Hawke movies work better when he’s paired with an electric personality (Robin Williams, Denzel Washington) to play off of. Hawke practically seems like Richard Pryor next to Uma Thurman and Jude Law. Still, you can tell he thought he was making Blade Runner.

That ambition is evident in Daybreakers, which is a pretty cool vamps-live-among-us movie that missed the supernatural craze by just a few years. Hawke plays a pretty vacant vampire doctor who double-agents against the ruling bloodsucker class and joins forces with the human rebellion. It’s just a dystopian monsters-in-the-future movie, but Hawke plays it like he’s adapting Kafka.

The same goes, to a lesser extent, for Sinister, which is a tortured-writer movie masquerading as a haunted-house flick. All of these films see Hawke making the same level of commitment as he does in anything directed by Linklater.

Hawke is a decent thug, totally passable. He plays one in Before the Devil Knows You’re Dead and What Doesn’t Kill You. But he is an oddly great movie cop.

Take the first scene in Finest, in which Hawke is sitting in a car, listening to crazy Vincent D’Onofrio tell some crazy story about drunk driving and bookies and bar fights. There’s a moment when D’Onofrio’s telling his story, and it’s clearly going somewhere bad, and the camera is on Hawke. Despite the unnecessary toothpick affectation and the heavy “Brooklyn” accent (Hawke, incidentally, did move to Brooklyn from Texas as a child), Hawke is utterly believable. He is believable as a guy stuck in a car with Vincent D’Onofrio. He is listening, laughing nervously, trying to be present. Just like you or I would be. Then he blows D’Onofrio’s head off and steals a bunch of money.

Over the course of the movie, as he gets more and more greedy and more and more desperate, Hawke keeps ratcheting up the idiosyncrasies. I have come to really like the job he does here, even though it’s probably not for everyone. It’s his ’70s Pacino role, and he doesn’t embarrass himself. If you haven’t already, do yourself a favor and see it just for his totally wired poker table monologue to a group of fellow cops about the benefits of robbing drug dealers and keeping the money.

Hawke himself thinks of Sal as the flip side to an earlier character of his, Jake in Training Day (see the AMA). Sal is what would have happened to Jake if he had kept riding with Denzel Washington’s Alonzo. Has there ever been a more thankless, difficult role than playing against Denzel?

I suppose I should say, in the interest of full disclosure, that I think Training Day, along with The Departed, are the two best cop films of the 2000s (they’re among the best films of the 2000s full-stop, too). The last 20 minutes or so don’t make any sense, but until that point it’s pretty flawless. If Washington has all the lines you quote, Hawke has the character you wind up thinking about.

The greatness of Training Day is in its depiction of the way men trade power within relationships; the way they assert themselves, sublimate, manipulate, and eventually dominate one another. This doesn’t have to happen physically. In fact, the ending of this movie is disappointing primarily because Alonzo and Jake’s relationship isn’t about who is going to kick whose ass; it’s about who is going to get into the other’s head. It’s one-way traffic for most of the movie, with Alonzo torturing Jake — emasculating him one minute, building him up the next, getting him righteously stoned, and empowering him to impose his will on his surroundings. For the movie to work, we have to care about Jake, no matter how much we’re enamored with Alonzo.

Which brings us to this mini-masterpiece of a scene:

Hawke has called Washington “the greatest movie star of our time.” I agree. Just look at the video above. But you can see why Hawke is such an underrated actor and movie star in the same scene. Again, Hawke is just a guy there. He is Jesse from Before Sunrise if he had moved back to the States, bummed around, and become a Los Angeles cop. He is trying his best to make a good impression, to be personable and develop a rapport, all while projecting the image he thinks his opposite wants to see. Washington might as well be Julie Delpy in that scene. Whether he’s walking in Vienna, or sitting in a diner with King Kong, Hawke is able to bring you with him.