My Feature-Length TV Show of the Year: Frances Ha 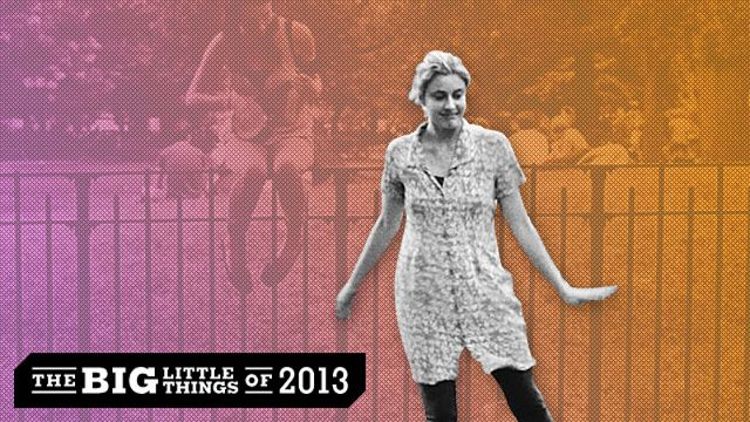 One of the reasons I enjoy watching and writing about television is that, as a medium, it is proudly undefinitive. TV, in its purest — which is to say messiest — form, is always moving forward. Change is the only constant: Characters fall in and out of love, pair off, age, and die. (Sometimes they even come back.) It’s the same story on the other side of the camera, too. TV writing is full of irrevocable deadlines, stressful scrambling, and learning to make do with the imperfect you’ve got rather than the perfect you could kill yourself chasing. (In that, it’s pretty similar to writing about TV.) But despite innumerable frustrations and indignities, TV remains mutable and forgiving. There might not be a chance to get it right, but there’s always a chance to get it better. For good or ill, it’s a lot like life.

Movies have always struck me as the opposite. Fewer are made and, quickie X-Men sequels aside, they take much longer to produce. Already blessed and cursed with a more limited canvas, filmmakers must also work in ink, not pencil: Whatever work is released into theaters is, George Lucas rereleases aside, inevitably considered the final word. The pressure to get it “right” is both immense and impossible, and often results in bases-covering and bad art. This sensibility has only grown as movies themselves have grown, as the quaint, billion-dollar blockbusters of yesteryear have given way to the multibillion-dollar global franchises of today. To protect corporate bottom lines, movies now need to be everything to all people all the time. This creates a problem of scope. Instead of simply introducing characters, we have Origin Stories; instead of conflict, we have Battles; and instead of endings, we have an endless dribbling of postscripts and codas that seek to tie a neat bow around absolutely everything and everyone. I am not just talking about superhero movies here, because every major Hollywood release is now a superhero movie, whether it’s about Spider-Man or Nelson Mandela.

So, in a year in which TV took some worrisome steps toward becoming more like feature films, it was refreshing to encounter a handful of movies headed in the opposite direction. What impressed me so much about Before Midnight and Drinking Buddies was their smallness. These films didn’t capture the definitive chapters in the lives of their iceberglike protagonists. (Not that they were chilly — just that they all had a lot lurking beneath the surface and were also extremely white.) They didn’t attempt to. There was no need. Instead, with great sensitivity, Richard Linklater and Joe Swanberg caught the interludes in their characters’ stories: the arguments, the mistakes, the indecision, and the intimacy of erratic people spinning in an uncertain world. There was a sense of movement, of possibility, that lingered long after the credits rolled.

Frances Ha, the best of 2013’s little movies, was particularly suffused with that jittery, hopeful uncertainty. It fed off of it like caffeine. Shot in crisp black-and-white, the film reeked of cigarettes, bad wine, and worse decisions. What so easily could so have been an indulgent, myopic mess was transformed into something exhilarating by creative collaborators Noah Baumbach and Greta Gerwig. The reason for this, I think, was the age difference between them: Star Gerwig is 30, director Baumbach is 44. Frances is a movie about a deluded twentysomething made with the perspective and clarity of a much older person. That breathing room allowed Frances’s foibles — her oxygen-gobbling anxiety, her possessiveness, her pride — to be understood as parts of a whole. The 86 minutes encapsulated a moment in Frances’s life, one marked by extremes of sadness and opportunity. It wasn’t her entire story.

As we age, the embarrassment of mistakes gives way to a keen nostalgia for the luxury we once had to make them. Baumbach clearly knows this: There was a gentleness to Frances Ha that’s absent from most coming-of-age movies. It’s a gentleness that’s been absent from Baumbach’s movies, too, which have grown increasingly acidic ever since his first classic, Kicking and Screaming. Among other things, the lack of anger in Frances Ha heralds the most surprising and welcome career reinvention of 2013. Instead of laying down a marker of authority and judgment, Baumbach and Gerwig did something that strikes me as very TV: They went with what they had and let the future worry about itself. As Frances herself learned, you can’t spend your life stressing about the impression you’re making, the boxes you’re ticking. Sometimes you’ve just gotta dance.