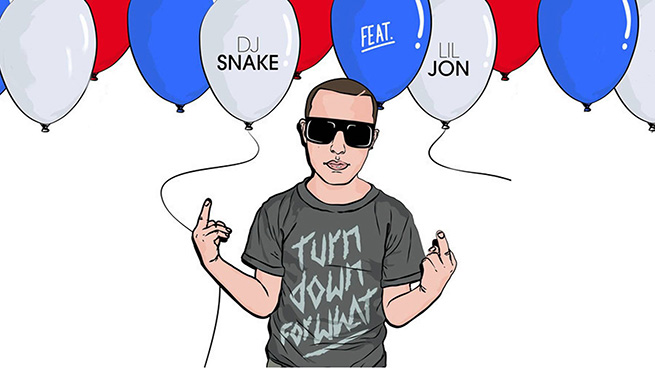 Time for me to take some issue with the official record of the Internet: “Turn Down for What” came out via Diplo’s Mad Decent label at least several months before the Columbia Records release in December 2013 that Wikipedia lists. I remember it being a staple in the “Lift Off” mixes Power 106 played during Friday rush hour late last summer, which of course it was and is perfectly suited for; it was all over the place at Hard Fest’s Day of the Dead which I attended with Molly Lambert last Halloween, and already everyone was shouting along with its essential, if limited, lyrics. Its most direct forbear is obviously Baauer’s “Harlem Shake,” and like that track, ended up lending itself well to viral interpretation. “Turn Down’s” virality mostly thrived on Vine, though, which meant I, along with the Hot 100 algorithm, was blissfully oblivious to the phenomenon.

This might be a hot take, but I think that Lil Jon is a rare pop cultural figure of whom there is neither too much nor not enough of. This may seem like a strange thing to say when you look at his list of guest appearances over the last decade, but when was the last time you were like, “Aw man, Lil Jon really biffed that one.” OK, I know when it was, on this wannabe “Turn Down” follow-up entitled “Let’s Get Fucked Up.” Producer MAKJ does not know how to use the Lil Jon shout. (The best way to use the Lil Jon shout: at the end, after everyone else has had their verse, then slowing the track to half-time and letting him go nuts on it.) (And now you know what my ringtone was during my last year of college.) In Columbia’s press release for the song, he revealed that the track had originally had a Redman sample on it; but “when I heard the song I was like, this beat is too crazy for that sample. I wanted to make it hip and current and the first thing that came to mind was the phrase ‘Turn Down For What!'” Never stop trusting your gut, Lil Jon.

This past week, “Turn Down for What” finally got an official VEVO-stamped music video, and, thanks to the director duo Daniels, the clip might be just outrageous enough to get those YouTube hits that will send this 2013 festival jam skyrocketing up the charts just in time to be a bona fide 2014 Summer Jam. (Disclosure and Sam Smith’s “Latch” is experiencing a similar second wave, which makes me worry that many of the songs of the summer might be from the wrong summer.) I know this doesn’t have to do with the music per se, but I’d be remiss if I didn’t point out how incredible this video is. Contemporary youth-oriented electronic/trap/dance/whatever music gets commonly branded as decadent and superficial; both of those things are true, but both of those things lend themselves really well to total anarchy. The “Turn Down for What” video features no toned Urban Outfitters–clad 20-year-olds, no bottles of Cristal, no futuristic light shows; just a lot of sweaty normies getting their wiggles out in the stifling confines of their dumpy apartments. Their bodies are sexual but neither perfect nor threatening, and the strictures of codified behaviors and gender roles fall away at the mercy of the drop. Also, you gotta love that Repo Man–esque “Light Beer” in the corner at 3:17, which is the secret decoder ring of the entire clip.

There are dance tracks you feel like you’d have to be dressed up to appreciate, but “Turn Down for What” is not one of those songs. It’s messy and egalitarian and something I’ll be proud to share with my grandchildren. And when they ask me with wide, wondering eyes what Lil Jon did, eventually turn down for, I hope I have a really good answer.

Final verdict: “SLEEEEPPPPPP OR THE POLICE”