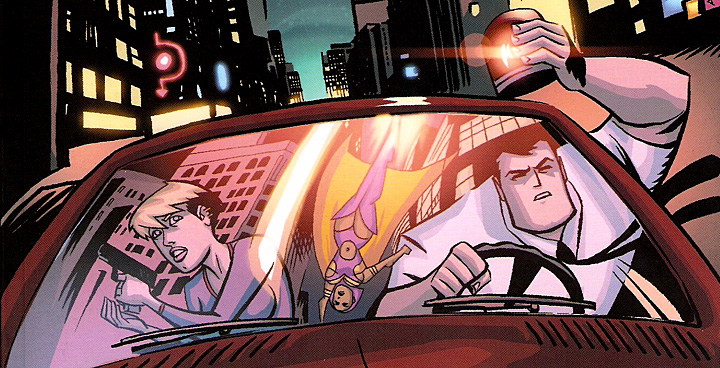 There used to be only so many places at television’s table. If a project didn’t fly with one of the big four broadcast networks or didn’t fit with an HBO or Showtime, it was swept onto the floor like so many crumbs. It was a wildly wasteful and inefficient system. Year after year, hundreds of potentially interesting square-peg scripts were trashed forever because they wouldn’t or couldn’t fit into the industry’s round hole.

These days, the table is more of a banquet hall and there are hundreds of ambitious newcomers fighting over the scraps. Yesterday, news broke that Sony’s PlayStation Network – a $50 per year subscriber service for devoted Call of Duty–heads — was the latest nontraditional platform to elbow into the scripted space. Its initial offering? A 10-episode first season of Powers, an adaptation of Brian Michael Bendis and Michael Avon Oeming’s fantastic comic-book series of the same name. A grown-up police procedural set in a world dominated by high-flying superheroes and city-stomping megavillains, Powers has long seemed like a slam dunk for a savvy network looking to capitalize on the booming popularity of capes. (It’s far more The Shield than S.H.I.E.L.D.) But FX struggled for many years to develop it, even going so far as to commission, then shelve a pilot in 2012 starring Jason Patric and Lucy Punch. For a long time it seemed as if Powers was dead. Other networks were too busy managing their own failures to try to salvage one from FX. But all of a sudden, PlayStation has hit the restart button.

It’s a clever gamble by Sony, a company that boxed itself into the razor business even after it was clear that the real money was in blades. With more than 150 million accounts on the PlayStation Network registered worldwide, Sony has a chance to become a major player in the television content world extremely quickly. Even if two-thirds of those accounts are inactive, Sony’s potential audience base dwarfs Netflix, which claims only 33 million streaming subscribers as of 2013. And Powers represents not so much a surprise resurrection as a canny example of corporate recycling: The show has always been set up at the highly successful Sony Pictures Television, the studio responsible for everything from Justified to the The Goldbergs. Moving it down the corporate family tree makes sense both financially and creatively. (It also suggests a potential future landing spot for more niche Sony Pictures properties like Robot Chicken and Community. Could it be six seasons and a video game?) Though I think it would have killed on FX, Powers might well be a better fit on the PlayStation Network. With crime novelist Charlie Huston in as showrunner, it’s precisely the sort of highbrow, geek-scented project that will appeal to hard-core gamers but also draw attention from the DualShock-resistant mainstream.

Still, Sony’s big announcement strikes me as the sort of splash that doesn’t cause too many ripples. Powers is likely to be a nice added value for existing PlayStation Network subscribers, not the killer app that adds significantly to their number. The difference between the PlayStation Network and Netflix is that the latter is a streaming service, available to anyone, anywhere at a reasonable monthly price. If Sony continues to insist on actual PlayStation ownership as a requirement for access to the company’s original content, then it’s still stuck in the same proprietary bind it’s been in for years. (The original iPod was an amazing piece of hardware, but it was iTunes going to Windows that finally killed the Walkman dead.) Casual gamers were long ago priced out of the console market. Why would casual TV viewers be convinced to move in the opposite direction, especially with less-expensive entertainment options proliferating at an outrageous rate? I doubt even the most desperate meth heads would have shelled out $400 plus a $50 annual fee (maybe — it’s not clear what a subscriber fee for TV content might be) for access to the final season of Sony Pictures Television’s Breaking Bad.

Whether Powers succeeds or fails — and good luck figuring out how Sony will even consider that question — I have a hard time envisioning the PlayStation Network as a serious competitor to television’s old guard anytime soon. Rather than picking up ambitious projects that slipped through the cracks, as Netflix did with Orange Is the New Black, PlayStation is more likely to thrive producing cheaper, more targeted fare: Maybe a The League–type comedy about a competitive gang of Mass Effect 3 fans or a True Detective–like downer starring Ratchet and Clank. That’s the multimedia tack rival Microsoft is pursuing with its Xbox One system: Its first scripted project is a Steven Spielberg–produced adaptation of Halo. It’s always a better idea to service the audience you have than throw away money chasing after the one you want. The TV business is booming, but that doesn’t mean it comes with extra lives.

Tired of Sex: The Unerotic Eroticism of ‘Nymphomaniac: Vol. I’